Current players look back on Kindbom and his legacy at WU

As Washington University’s long-time football head coach Larry Kindbom prepares to retire on Saturday after 31 seasons, various current players had the chance to reflect on the coach who, in their words, changed their lives for the better.

To start off the laundry list of just how many ways Kindbom has impacted his current squad ranging all the way from freshmen to seniors, he makes sure his players have their priorities straight. He is well aware that they attend one of the top universities in the world, and he gives them the time they need to achieve all that they want to achieve. 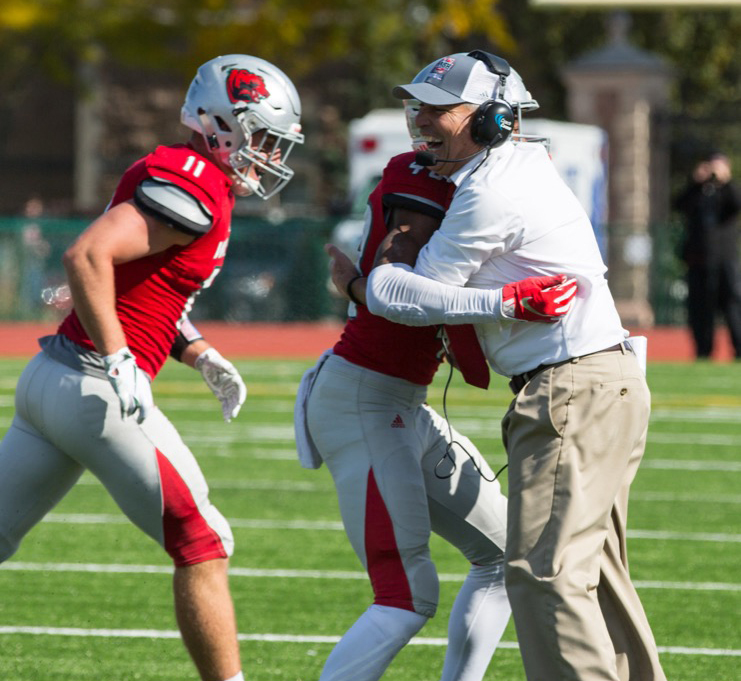 Coach Larry Kindbom hugs junior defensive back Andrew Whitaker after Whitaker caught an interception against Augustana College on Nov. 2. Kindbom is known for the support and encouragement he gives his players both on and off the field.

“He wants us to be successful,” sophomore linebacker Alex Harvey said. “He understands that we have classes and that football isn’t always the number one priority.”

“I think one of the biggest things Kindbom harps on all the time is that we are athletes, but we are students first…he thinks doing well in school is so important,” junior defensive back Will Hurley said.

“He really tries to teach you to be a better person and prepares you for life more than just preparing you to be a good football player,” senior defensive back Matt Bernstein said.

Kindbom does a great job in ensuring that his players are taken care of when they go through the occasional slums of being both a football player through injuries and a student through challenging academic pursuits.

“Last year, when I was a junior, I was struggling to find an internship or anything and he came up to me and asked me how I was doing on that aspect—if I needed any help, I could go to him and talk to him, and he could talk to some people for me, so he really is about helping his players,” senior wide receiver Nick Watts said.

“I actually injured my knee over the summer back home training on Aug. 13, it was the day the whole team was arriving, all 100 [or] 110 people on the team were showing up and [Kindbom] obviously was coordinating moving in, where everyone’s going to live, checking people in and coordinating everything for the start of the season, day one,” junior quarterback Tim Tague said. “That happened to be the day that my surgery was scheduled…so Aug. 13, my surgery was midmorning, I’m expecting just me and my mom waiting there for the surgery to start, and all of a sudden Coach K walks in. He has to worry about 110 other people, moving them in, coordinating everything, and he still found time to make an impact and show me he was thinking about me.”

“I had a pretty major injury—I broke my ankle—and he was always there checking up on me, making sure I was doing alright, wondering how I was doing,” Watts said. “He was just all around a super nice person, always cared for his players, more than anybody ever knew.”

Even before having his players set one foot on Wash. U.’s campus as students, he makes sure to reach out to check up on students.

“I’m from Des Moines, so he would call me when we had a big thunderstorm near our house, he just called to make sure my family was OK and, this is before I was even on the team,” sophomore running back Matt Moore said. “I was still in high school, but I’d already committed. That’s just one example of the type of guy that he is, he’s always asking you, ‘How’s your classes?’ [or] ‘How’s your family doing?’ He wants to meet all of your family and really talk more than just football.”

His players even get surprised at times with just how willing Kindbom is to help out in seemingly mundane scenarios when it is not even expected of him.

“Coach K knows that me and Tim [Tague] like to play golf,” Hurley said. “We were walking out to Forest Park, the golf course, and Coach K pulls up, is picking up a recruit to take him back to the airportーhe’s already being a nice guy, driving a recruit all the way back to the airport, which I feel like a lot of coaches won’t do…and he was so sorry that he couldn’t drive us to the golf course as well and that he couldn’t do more for us and help us out. He was just so apologetic and me and Tim were all like ‘What?’ Like we didn’t ask you to do this, we wouldn’t expect you to even do this. He felt so bad that he couldn’t take us down to the golf course—he’s always trying to help other people.”

On the football side of things, Kindbom has established a culture of doing things the right way, even if it may lead to what seems as an unfavorable result in the box score.

“Even though he’s leaving, you know that the culture he’s created here is not going to leave, especially with the other coaches and how he’s affected players here that are still going to carry forth the culture and everything he’s done for the program,” freshman wide receiver Cole Okmin said.

“I think he really wants to instill a culture of success and playing for your teammates, playing for something greater than yourself, and I think that kind of goes along with the university,” freshman defensive back Sam Mattecheck said. “We’re all working together for something greater and as players, we really just want to play for him. He’s done a lot for us. He teaches us so much that every rep we take is not only for ourselves, our teammates, but also for him. So it’s all a collective group effort, and he displays that well.”

Kindbom is not a man to focus on the stars of the team, but instead gets hyped up for everyone on the Wash. U. football roster when they do something noteworthy.

“My favorite memory of Coach K is probably [from] my freshman year when I was on the [junior varsity] team,” senior defensive back Justin DiCarlo said. “The varsity had just had a game the day before. It was a long game, we lost and there was a lot of film to go over, but Coach K still came to the JV game the next day. When I got an interception, seeing him and all of his excitement for me, just a little freshman who didn’t have any effect on the varsity team, seeing his excitement and how he valued me even when I was that freshman. That’s my favorite memory.”

During his 31 years as head coach, Kindbom established himself as a person who constantly got involved with non-football-related things. He is as respected for that aspect of his job as he is for being the football head coach. He tries to make it a standard for everyone that he leads on a day to day basis.

“You see the people he works with in the athletic department, the other coaches, no one has ever had a bad thing to say about him. You could just see that everyone he interacts with is changed for the better,” Tague said.

“He wants to make sure that football players try to act in a way that would [make them] the role model for Wash. U. If someone were to be walking around, they could pick any one of us football players out and and be like ‘This is someone that embodies Wash. U.; this is someone that helps the community, does everything that he needs to do and goes above and beyond to help others,’” senior linebacker Jeff Marek said.

The players, athletics department and entire university will have plenty to miss about him and have some advice for the next person to inevitably take Kindbom’s spot.

“The thing I’m going to miss most about Coach K is the energy that he brings whenever he walks into a room,” DiCarlo said. “No matter what the conversation is, whether it’s [about] how’s my day been, how’d the film look or how the next game is going to look, you’ll always have this positive energy and this desire to do better. That’s what he brings to the table, both on the football field and off.”

“They [the next coach] definitely have some big shoes to fill,” Marek said. “I guess my biggest piece of advice would probably be listen to what everyone said about Coach K and try to learn from that, pick up qualities that he had and what made him so special to this athletic department.”