Katy Mockett is a junior from the Seattle area. She has started all but one game in the last two years for the Washington University women’s soccer team. Along with junior Ellie Moreland and sophomore Gabbie Cesarone, Mockett has anchored a defense that only allowed eight goals in 18 games. No team has managed to score on the Bears twice in a game in which Mockett has started. Ahead of Saturday’s first round playoff matchup with Maryville University in Tennessee, I sat down with Mockett to discuss how she balances academics and soccer as well as her mentality heading into the playoffs. 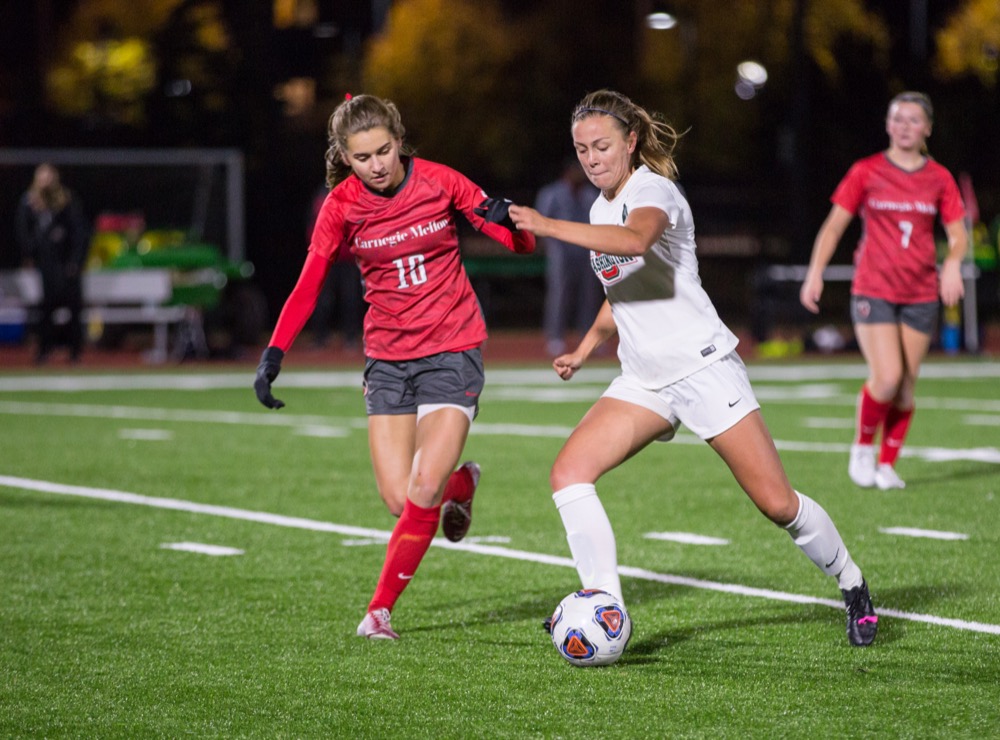 Junior Katy Mockett defends the ball from a Carnegie Mellon University attacker. Mockett has started in every game over the past two years, save one.

Student Life: I’m going to start with the question I start most of my interviews with: why Wash. U.?

Katy Mockett: The thing that attracted me to Wash. U. at the beginning was just the academics. I think that’s a universal sentiment amongst the athletes here is that school always comes first. You know, it’s a DIII program, so we’re all really committed to excelling in the classroom. And I think [head coach Jim Conlon’s] attitude of school, soccer, social life, in that order, was something that I really resonated with. And so just kind of being able to excel in the classroom and then bring that attitude into the playing field and into my workouts and compete for a national championship alongside some of the best teammates in the country every day is definitely a huge reason as well.

SL: Gotcha. So you’re a two time University Athletic Association All-Academic selection. How do you maintain a balance between school and soccer?

KM: I think I owe a lot of credit there to my teammates. They pushed me every day to be the best person that I can be—not only on the field but off the field as well. And, you know, those travel trips, like our doubleheader weekend against NYU and Brandeis, people are in the [hotel] lobby, 24/7, doing work. And when we’re on campus, there’s always people offering up study rooms or asking if other people want to work on a homework set with them. So I think that just the culture on our team has really helped push me and then also just the leaders throughout my years here at Wash. U. My freshman year, our senior class was really academically oriented. And they kind of set the standard there and then my sophomore year, the same thing. I think it’s just been a big part of our culture’s succeeding on and off the field. So yeah, I owe it all to my teammates, really.

SL: You just mentioned some of the leaders who were on the team when you were a freshman or sophomore. I was looking at the stats today and I believe you have the third most starts on the team after [senior] Taylor Cohen and [junior] Emma Greenfield. Do you think that your experience on the field adds something in particular to the team?

KM: My freshman year, I was able to get into a lot of games off the bench. And that was a really good way to ease into my collegiate career because I was able to just transition slowly into that role. And then my sophomore year, I was able to learn from some of the experiences I had my freshman year and I’ve had a lot of really good, big role models to look up to like Kelly Von Zupp my freshman year was, like a huge inspiration to me. And then Hannah Menard and Caroline Dempsey were both defenders last year who I looked up to a lot… There’s always ways to improve and your teammates always push you to be better every day. So I think just being part of this program and easing into my role there has been really helpful in terms of my leadership this year.

SL: What’s different playing between four backs, like you did for a lot of last season, versus just playing three backs primarily, as you have this fall?

KM: So defensively, it’s kind of a different responsibility for me, whether I’m in the four-back or the three-back. Traditionally, in the four-back, I would play on the outside. So I would be a lot more involved in the attack, higher up the field, whereas this year, a lot of my contributions offensively are mostly just creating that first pass. The shape of the three-back is really important. We have to be able to support each other really well because there’s only three of us, and our communication has to be top level as well, because we just don’t have that extra body. So I think that we’ve done a really good job transitioning into that formation this year. Gabbie’s really held us down and Emma with her communication and Moreland has stepped into her role really well. So it’s exciting to see especially with a lot of turnover from last year, how we’ve kind of been able to adapt and make this three-back [set-up] really successful.

SL: What has been your favorite memory in your time playing for Wash. U.?

KM: I actually would have to say winning the UAA this year was probably the thing that sticks out the most—we started the year 2-1-1, which, coming off of the record that we had last year, that was a really tough way to start the season. And I think there was a lot of doubt at the beginning of the year, mostly from people outside the program, about how we would do just because we lost so many amazing seniors. And so once we were able to find our groove, it was really rewarding to see us get those results one at a time and just focus on ourselves and not listen to the outside influences, and just compete to be our best selves every day. So that all manifested in winning the UAA and that big game against Case [Western Reserve University]. And it was just such an emotional time because I could tell how much our team had grown throughout the season, and how much we had improved and leaned on each other throughout. And so I think that was probably my favorite memory so far.

SL: Speaking of the UAA in your section of the playoffs, there is Emory University you can face as soon as next Friday, I believe. And University of Chicago. Is there any excitement or any thought about being able to face another UAA opponent in the postseason?

KM: I mean, I think that our attitude in the postseason is just “nameless, faceless.” We go into every game with the attitude that we’re going to focus on ourselves and we’re going to do what we do well, and so I think that doesn’t really matter who we play, the Bears are going to come out ready to go every day.

SL: What’s also really cool that the UAA has five teams that are in the tournament. That was really impressive that you guys were able to win it even though it’s been such a strong year.

KM: Yeah, the UAA is one of the most competitive leagues in Division III. And I think it’s such an amazing opportunity to be able to compete against those teams because we all push each other to be better and there’s never an easy game. And so I think that’s a true testament to just how strong the UAA is. And it’s really exciting to see that many teams represented in the playoffs this year.

SL: Saturday you play Maryville, then you will play again on Sunday. How do you prepare for those back to backs when you’ve only played three and you haven’t played them since September? I imagine the weather’s not going to be much warmer than this? [It was 20 degrees at the time of the interview]

KM: It’ll be balmy. A balmy 40 degrees. I mean, I think our day-two legs is something that our coaches always really emphasized in this program, and as much as we take each tournament one game at a time, I think it’s always important to be able to have that elite level of fitness. And then with the weather, you know, every team is going to compete in the same weather so we don’t really take that into account. We control what we can control and just be ready to bring our best no matter what.

SL: How do you maintain composure under pressure? I know that you all played a lot of close games this year but also for you, particularly as a back, the margin of error seems to be very narrow.

KM: I think it’s all about trust, honestly. You know, within the back line, I have so much trust in Gabbie and so much trust in Moreland and Emma is always there in the game…helping give me a little bit of guidance. So I think there’s a lot of trust within the defense. But there’s also a lot of trust just generally within the team. You know, we’ve played a lot of close games this year, we’ve gone to overtime a lot of times. And I think that throughout those games, like the biggest thing is to continue to believe in your teammates and know that we have each other’s backs and will do whatever it takes for each other, and for this team, so it’s not really as much pressure on one individual as it is just believing in each other and putting each other in situations to make big plays.

This interview was lightly edited for length and clarity.