As Isham’s goal rocketed its way into the back corner, it seemed as if the Bears were destined for their fifth straight loss. Carnegie Mellon had already gotten off a corner kick and two separate shots before Isham, a 6 feet, 3 inch tall midfielder who towered over the rest of the field, pulled down a pass from near his shoulder, sending a volley past the well-positioned Wash. U. goalkeeper, senior Connor Mathes. It looked like fate itself was against the Bears.

But it was not. 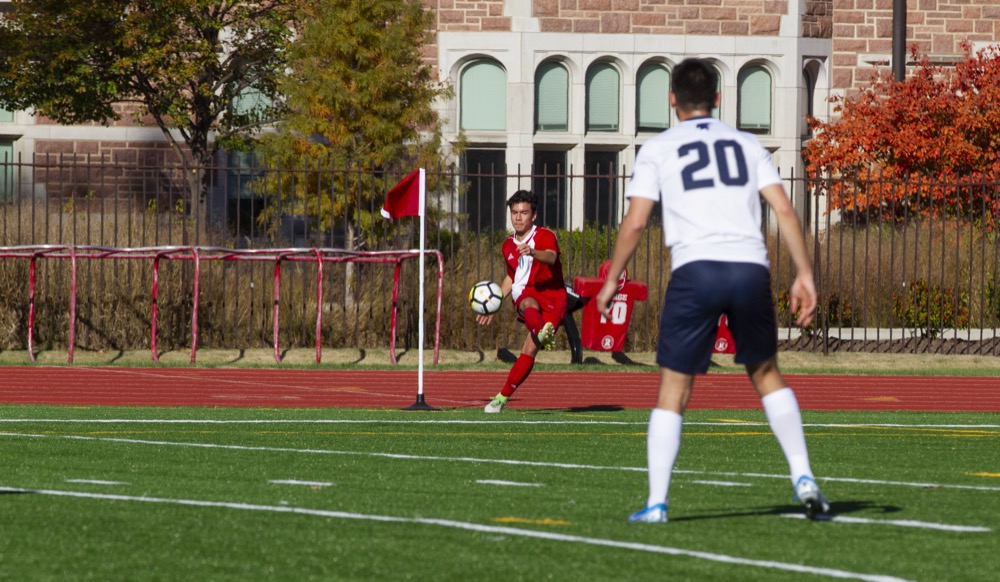 The Bears stormed back against Carnegie Mellon, scoring three goals to win, 3-1, snapping a four-game losing streak that extended back to Oct. 12. They then added another victory on Sunday, beating Case Western Reserve University, 2-0, to clinch their first winning season since 2016 as they advanced to 8-6-1 with one game remaining.

Wash. U. trailed for just over 12 minutes against Carnegie Mellon after Isham’s goal before breaking through. In the 14th minute, freshman Shiv Lamba sent a cross arcing 30 yards downfield, where the Tartans’ goalkeeper, junior Alex Singh, had rushed out of the goal to play the ball. Wash. U. junior Will Sproule beat Singh to it, though. When Sproule corralled the ball after a high hop and sent a left-footed volley bouncing toward the goal, Singh was overcommitted. A sliding Carnegie Mellon defender could not stop the ball and the Bears had tied the game, 1-1.

Sproule’s goal opened the floodgates. In the 28th minute, freshman Julian Gancman crossed up his defender to find open space before sending a cross into the box, where sophomore Nolan Wolf headed the ball past Singh for his fifth goal of the season, putting the Bears ahead, 2-1.

Wash. U. put an exclamation point on the victory in the 52nd minute. Freshman Sergio Rivas secured a rebound after Carnegie Mellon blocked his first shot. He then sent one into the back of the goal, the first score of his career.

After just two goals over five games in October, the Bears had focused in last week’s practices on converting scoring opportunities into goals. “We’ve been working in front of the net every day,” Clarke said. “Sometimes that’s all we’re doing.”

The Bears’ defense, anchored by goalkeeper Connor Mathes, held their own throughout. Mathes made six saves on the Tartans’ seven shots on goal and Wash. U. overcame Carnegie Mellon’s eight corner kicks to keep them at one goal. The two-goal margin of victory was Wash. U.’s largest since Sept. 30.

Wash. U. stayed hot on Sunday afternoon against Case Western. Rivas built on his Friday goal with an early score as he beat two Spartans defenders before lining up a shot at the left side of the goal. Rivas’ goal, his second of the weekend, demonstrated the Bears’ ability to quickly shift a game’s momentum. “They put us under pressure for 90 seconds and then we scored,” Clarke said. “We had one kick, a great control, a great through ball and we scored.”

As Clarke had after Friday’s game, Rivas cited the focus on scoring in practice as a key to the Bears’ weekend success. “[In practice] we were playing a game where we would just attack at goal and just get a bunch of shots, so I think that gave us the confidence to take our opportunities,” he said. “We’ve had a tough couple weeks, so definitely getting on the front foot early carried us and gave us energy to continue throughout the game. I thought that after that we really played with a lot of energy and grit.”

Rivas was not alone in scoring twice in the two games. Wolf added his own follow-up goal in the 40th minute on an assist from fellow sophomore Aidan Ryan. The Spartans out-shot the Bears, 15-10, and had more corner kicks, 6-3, but could not find the goal. Mathes sparkled again at goal, making three saves, including multiple leaping grabs and a play where he fisted a corner kick away from a crowd to clear it.

“We worked a lot on our defensive shape and being in the right spots to challenge for balls,” senior Isaac Plutzer said. Plutzer, a back whose blond ponytail and motivational shouts are synonymous with Wash. U.’s clamplike defense, said that the Bears’ positioning was crucial to the team’s success. “Just grit and getting in front of balls and keeping them far away so that the shots are further out,” he said.

“We’re better than our record,” Clarke said. “We definitely could have won a lot of games that we didn’t win and we would be really good candidates to go into the tournament, but soccer is—there’s just a lot of parity in men’s soccer.”

Wash. U. will take on No. 6 University of Chicago next Saturday in its season finale. Stakes are high, but even with a win it is unlikely that the Bears will make the NCAA playoffs. “While I think we played a really good schedule and beat some very good teams—and some are going to be in the tournament—I would be stunned if we got in,” Clarke said. “We have seven games we didn’t win and there’s a lot of deserving teams. Not all the deserving teams get in.”