The story behind Teri Clemens and WU’s first national championship

“How long until you can win a national championship?” John Schael asked. 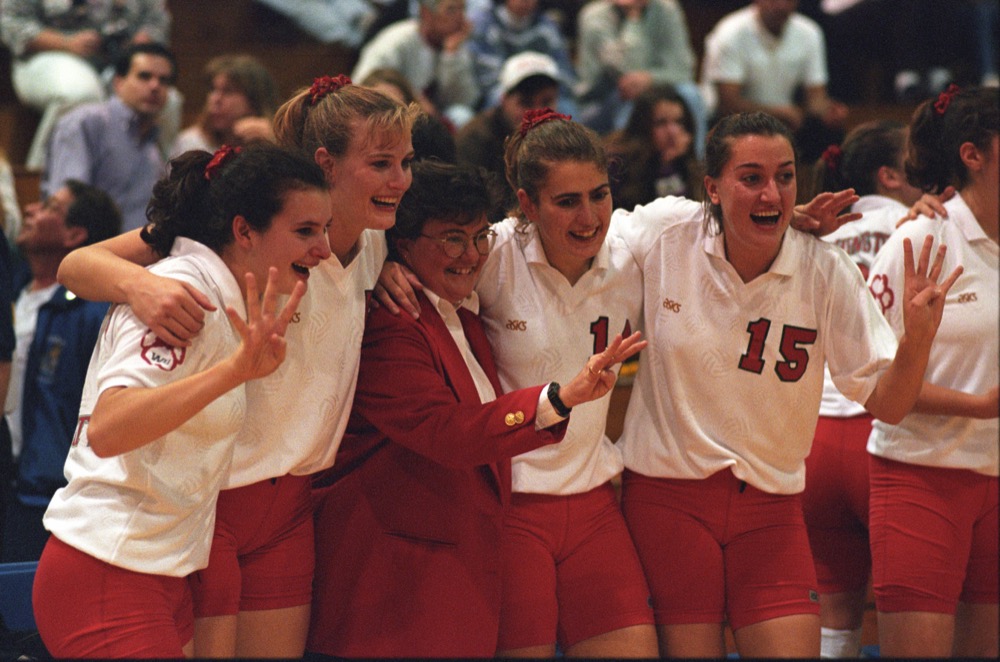 Teri Clemens and the Wash. U. Volleyball team celebrate their fourth national championship in 1994.

Clemens, who was interviewing for the head volleyball coach position, did not show any sign of surprise. She replied almost instantly. “Five years.”

Take a look at the new Field House, Clemens said. Clean floors. Multi-decked. Ample court space. It looked like a Division I stadium.

Take a look at the University. An institution that could lure elite athletes who wanted an elite education.

Take a look at John Schael. Resources, support and commitment from the University’s administration.

Clemens was certain she could win at Wash. U.

“I never ran across such a coach who had such confidence in her ability,” Schael said. Maybe it was even a bit of cockiness. But he liked it. It was “refreshing.”

And, the thing is, Schael believed her. A day later, he rolled the dice, handing the program over to the 28-year-old with lofty expectations who had never coached or played volleyball at the college level.

Schael’s gamble paid off. Clemens won a national championship in her fifth year, just as she promised.

“She was the real deal,” Schael said. “She walked the talk.”

It was mid-August of 1985 when Clemens accepted Schael’s offer. Some would have celebrated. Some would have relaxed and basked in the moment. Clemens, however, spent the afternoon differently. Knowing she was behind on recruiting, Clemens called the first high school player she could think of: a 5’2” setter from Lawrence, Kan., whom Clemens had watched play on the Amateur Athletic Union circuit months before.

But Clemens was recruiting for the Wash. U. volleyball program in 1985. A program that had no history of winning, not just in volleyball but really in any sport at all. Still, Clemens pitched a new Field House (the team had previously played in the Women’s Building), a strong academic school, and a coach who was “the most competitive person I ever met,” Nishikawa said.

Clemens thought it was her ability to recruit that made her so successful so quickly. “When I lost athletes, I lost to Division I schools. That was my goal,” Clemens said. She did not eye Chicago or Emory. She eyed Stanford and Rice. “The ring is the same at all three levels,” she told recruits.

However, Joe Worlund, her assistant coach for 12 seasons, said Clemens’ greatest strength was her practices, where players were never caught standing still. Three or four different stations went on at once.

Clemens rarely ran the same drill twice in a season. It was always something new, always something creative to improve the team’s biggest weakness at the time. Sometimes they would not even practice with balls. “She used matches to find out what she needed to practice the next day,” Worlund, who worked in various roles in the athletic department from 1982-2014, said. But one thing always stayed the same: the drills were competitive, with one player coming out on top. Practices were demanding and many of the holdovers from the previous coaching staff had trouble adjusting.

Yet maybe Clemens’ greatest strength was something else: her ability to survive that first year, a year in which she had to build a volleyball program from scratch. A year in which she did not just coach volleyball, but served as an assistant basketball coach as well. A year in which Clemens and her husband started to think about adopting kids. A year in which she was losing and Clemens did not like losing. “She came to Wash. U. and wanted to have a very competitive program. She didn’t just want to be a college coach,” said Mark Edwards, who retired last year after two national championships and 37 years as the men’s basketball head coach. Clemens coped with the losses by working more and more.

In the mornings, Clemens would map out volleyball practice. It took time to think of unique, effective and competitive drills for every two-hour block of practice. “She would prepare, prepare, prepare,” Schael said. If she was not planning practice, she was probably calling up recruits or learning recruiting tactics in Edwards’ office.

This was not out of the ordinary for Clemens. She always played and coached multiple sports. At Truman State, she was the first women’s athlete to receive an athletic scholarship for her play in tennis, softball and field hockey. At Incarnate Word, she coached volleyball, softball and basketball. But volleyball was always number one. “I knew in third grade that I was going to be a volleyball coach,” Clemens says. “It never wavered. Ever.”

Clemens’ envied coaches like Edwards, who only had to worry about one sport. Imagine if Clemens did not have to squeeze in a two-hour basketball practice. It only took time away from building a nationally ranked program, and they were far from it. The team finished Clemens’ first season with a 12-18 record, losing eight of its last 10 games. Players from the previous regime quit, uninterested in the commitment Clemens asked of them. “They wanted a more casual program…Some of them were more interested in where we were gonna eat lunch,” Clemens recalled.

Clemens held her players to a high standard. Shirts had to be tucked. Hair was pulled back. When they went to matches, jackets had to be zipped all the way. Bags were always on the right shoulder. Right hand was always on the person in front of you during huddles. The players were a little afraid of Clemens, remembered Nishikawa, and rarely did they test her.

On the court, players had to re-learn the fundamentals they had honed their entire life. “Teri is a very technical coach,” Worlund said. “And you kind of perform as robots to a certain extent…You become better than everyone because you’ve worked on technique so much.” But many of the players from the previous regime did not want to re-learn their skills. They did not want to worry about on which shoulder they had to hold their bag.

Somewhere in the whirlwind of a first season, Clemens received a call from Nishikawa, Clemens’ first-ever recruit. Nishikawa wanted to come to Wash. U. She wanted the level of intensity and discipline Clemens’ preached. This was just the news Clemens needed to hear. The recruits started flooding in quickly after. One by one, until Clemens had eight committed players. “She could sell swampland in Florida,” Worlund said. “She’s a salesperson. She’s a personality. She’s charismatic.”

The next year, five of the freshmen started. Clemens was also able to drop her duties as assistant basketball coach and focus solely on volleyball.

With her own recruits, more time and a full preseason, Clemens finally had the right foundation. Wash. U. won 43 games in Clemens’ second season, 26 more wins then the program’s highest win total in its entire history. In the matter of one year, Clemens had turned the Wash. U. volleyball program around.

But she wanted more. She still had a national championship to win.

Clemens was in the green room preparing for the school’s first-ever national championship when Phil Godfrey, the assistant athletic director, burst through the door. “There’s like 1,500 people in the gym!” He said. Clemens knew that Wash. U., which was hosting the championship, would draw a decent, even a large crowd. But 1,500 people? That was a lot.

Shortly after the first knock, there was another. It was Godfrey again. The game was sold out, he updated Clemens. 3,200 fans were in the gym. “And oh my gosh they’re breaking windows to get in,” he exclaimed. Everyone wanted to see the volleyball team.

Godfrey was not lying. When Clemens walked out, she saw it for herself. The new Field House was packed to the brim with students, teachers, administrators, kids and community members. It was “electric,” said Schael, the biggest Wash. U. crowd he had seen in his 36-year career.

“People were hanging in the rafters for volleyball at Washington U. Five years before, [the volleyball team] played in the Women’s Building with people sitting against the side wall,” Clemens reminisced. “And here I am, almost in tears…I’m overwhelmed walking out there.”

Clemens thought back to her first season, when only 25 people attended their games—most of them her family. She often asked her players to bring one friend, in hopes it would double the attendance. But it was different now. Now they could not keep people out of the gym. Now Clemens’ first recruiting class were seniors. Now Nishikawa was a three time All-American and two time Division III Player of the Year recipient. And now, from the opening serve of the championship, it was clear how far the Wash. U. volleyball program had come. The team went on to blank Ohio Northern University 3-0 to capture the school’s first ever national championship.

Before the game, Clemens, who naturally anticipated a win, had purchased 48 cans of silly string. She hid them under her seat and when the final point was scored, she threw the cans into the stands. It created one of the most iconic photos in the history of Wash. U. sports. The Field House packed to the top row. The players celebrating in a circle with their jerseys tucked. The silly string hanging in the air above their heads. 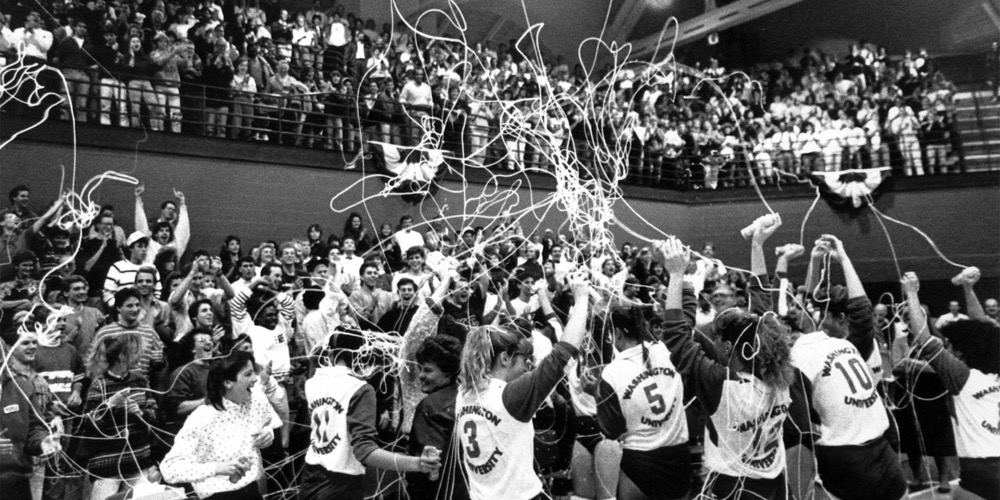 Finally, Wash. U. was on the map. It was not just a win for Clemens, but for the whole athletic department. The first championship was a marker. John Schael’s efforts to turn around the athletic department had worked. Wash. U. could win at the top level. It was not just a school for pre-med students. Wash. U. could be a sports school, too. And it was Clemens who broke the seal, showing everyone that a championship was possible at Wash. U.

Now, Wash. U.’s sports program has improved by leaps and bounds thanks in large part to Clemens. Last year, the school finished third in the Learfield IMG College Directors’ Cup, which ranks every Division III sports program. In the past five years, the school has added four more championships, bringing its grand total to 23. It is hard to remember the days when Wash. U. was not ranked in almost every sport. A big reason for that turnaround is Clemens’ seven national championship rings, including six in a row from 1991-96. An undefeated season in 1992. A career record of 529-77 and 136-1 in University Athletic Association (UAA) play.

30 years later, Clemens’ eyes start to water up as she thinks back to that first championship night. The tears do not seem like tears of sadness or longing, though. Various health problems, including pneumonia, blood infections, mengatitis and Methicillin-resistant Staphylococcus aureus (MRSA), caused Clemens to retire in 1998. She has been “on her deathbed multiple times,” said Worlund. Though she feels healthier now, having miraculously run a marathon in 2011, Clemens knows she can no longer endure the wear and tear of a full college volleyball season. “Life has moved on enough for her,” Worlund said. Clemens fills her time playing pickleball and golf.

Instead, the watering in her eyes seem to come from a sense of pride. Pride over how far her team came after that first season. Pride over the tradition she started at Wash. U. Pride over all of the fans who broke windows to watch her team play that night against Ohio Northern.

“It was an amazing celebration at Washington U. Like none I ever remembered,” Clemens said, “until we won the next one.”