It was senior Taylor Cohen who lit up the scoreboard as the No. 6 Bears mauled Millikin University on Wednesday night, but by the time Cohen scored her first goal, the game winner had already graced the back of the net. Sophomore Erin Flynn had already scored to put the Bears up 1-0. Cohen added to the scoring gap, piling on goal after goal after goal. When the time ticked to zero, Cohen had recorded the second hat trick of her career and the Bears had won, 5-0.

The Red and Green were in control from the outset. Within four minutes, Cohen had already taken two shots. The Bears kept the pressure up until the 15th minute when they finally broke through. A cross found the foot of Flynn, who fired a shot towards the far post for the first goal of the game. The score would prove to be the decider, as the Bears blanked Millikin for their third consecutive shutout and seventh of the season. The goal was the fourth game-winner of Flynn’s career.

Senior Taylor Cohen shoots a close-range shot against Milliken University Wednesday night. Cohen had a hat trick, the second of her career, and the Bears added two more goals to win 5-0.

The rest of the half was just as dominant as the first 15 minutes for the Bears. Washington University recorded eight shots on goal in the first 45 minutes. Millikin goalkeeper Hope Limoges did well, stopping five of those shots from getting behind her. However, when Taylor Cohen got the ball on a breakaway with no one to beat but Limoges, it became clear that she was not going to be denied. Cohen converted the shot into another goal to extend the lead to 2-0.

“Marissa Kalkar was in on the box and she did a really good job of holding her defender off and I thought I had a better angle on it, so I called her off of it,” Cohen said of her first goal, adding “that’s what we do—teammates work off each other—and I was able to put that one in.”

Less than a minute later, Cohen scored again—this time off an assist from junior Katy Mockett. The Bears entered the locker room with solid 3-0 lead.

The Bears outshot Millikin 26-1. While the goals and opportunities Wash. U. created were dazzling, the defense had another lockdown performance. “I think the defense is a team thing,” head coach Jim Conlon said. “Our back line does a great job with our goalkeeping, but it starts from our forwards all doing the right things together with all 11.”

The second half was more of the same. The Bears took 12 shots and had the Big Blue on the ropes for all 45 minutes. In the 86th minute, Cohen added yet another insurance goal to push the score to 4-0 and secure the hat trick. Freshman Sydney Essler scored one more to round out scoring at 5-0.

“It’s awesome,” Cohen said of her hat trick. “You know—you never go into a game expecting that you’re going to get it, but you’ve just got to keep going on.”

The game was the Bears’ last before beginning their University Athletic Association (UAA) schedule. The team hopes to carry the momentum of the victory into conference competition.

“This is our last game before we get into UAAs, so we really wanted to finish off that non-conference schedule strong.” Cohen said. “I think everyone came out strong tonight.”

The win was head coach Jim Conlon’s 199th with Wash. U. The Bears will have a chance to secure his 200th when they take on No. 18 University of Rochester, their first UAA opponent of the year, on Sunday at 11a.m. in front of a home crowd at Francis Olympic Field.

A single Bear, sophomore Nolan Wolf, carried the men’s soccer team as well this week as Wash. U. shut out Greenville University, 3-0, at home on Monday night. Wolf scored twice, bringing his total to four goals on the season, good enough for second-highest in the UAA, and goalkeeper senior Connor Mathes had three saves in his first start of the season.

Wolf opened the scoring in the 38th minute after fellow sophomore Alex Jaberi Vivar made a sharp cut to his right around a defender in the corner and sent a long cross soaring toward the box. The ball flew over the head of another Bear before Wolf came swooping in to head the ball over a Greenville defender and past the flailing goalkeeper to put Wash. U. ahead. 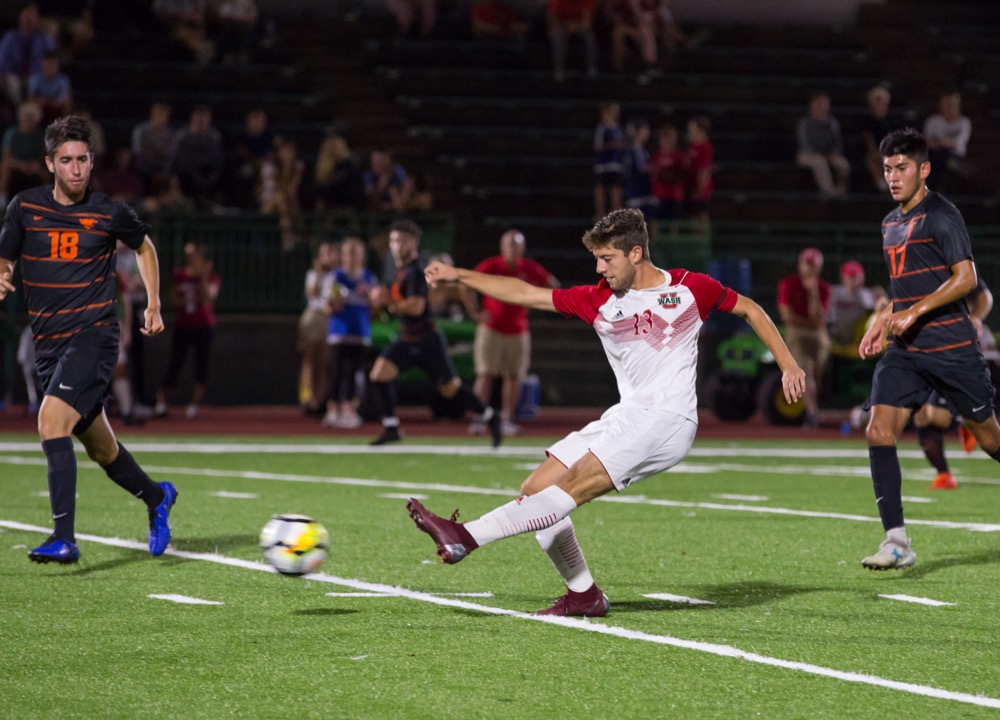 Wash. U. doubled its lead in the 66th minute when Wolf struck again, this time on a double assist from freshmen Sergio Rivas and Julian Gancman. Rivas controlled the ball in the back right corner before looping a cross to Gancman on the far side of the goal. Gancman lowered his shoulders and headed the ball into the box, where Wolf bounced in wait. He too headed the ball and the Greenville keeper—who had stepped forward to defend Gancman—had no chance at a save. Sophomore Aidan Ryan added a goal in the 89th minute, his second of the year, to put the finishing touch on the Bears’ victory.

Offense was not the only story for the Red and Green on Monday. The Wash. U. defense held Greenville to just six shots, including just three on goal; the shutout was the Bears’ fifth of the season.

The Bears improved to 5-2-1 on the season and have won five of their last six games. They face a potential challenge this weekend, however, in the University of Rochester, their first UAA opponent of the season. Wash. U. has traditionally struggled against the Yellowjackets, with the all-time series at 9-16-8, and the Bears have not won any of the teams’ last seven matchups, going back to the fall of 2012. The two teams will meet on Sunday at 1:30 p.m. at Francis Olympic Field.