The scoring for the Washington University women’s soccer team’s 2019 season was kicked off by an unlikely source. In the Bears’ 3-0 win against Calvin University on Friday, a corner kick from sophomore Erin Flynn boggled around the box and found itself at the feet of sophomore center back Gabbie Cesarone.

“I was like, ‘It’s either in the back of the net or going back towards our end, and I don’t want to make that run back right now,’” Cesarone said. “So I just stepped into it and tried to place the ball.” 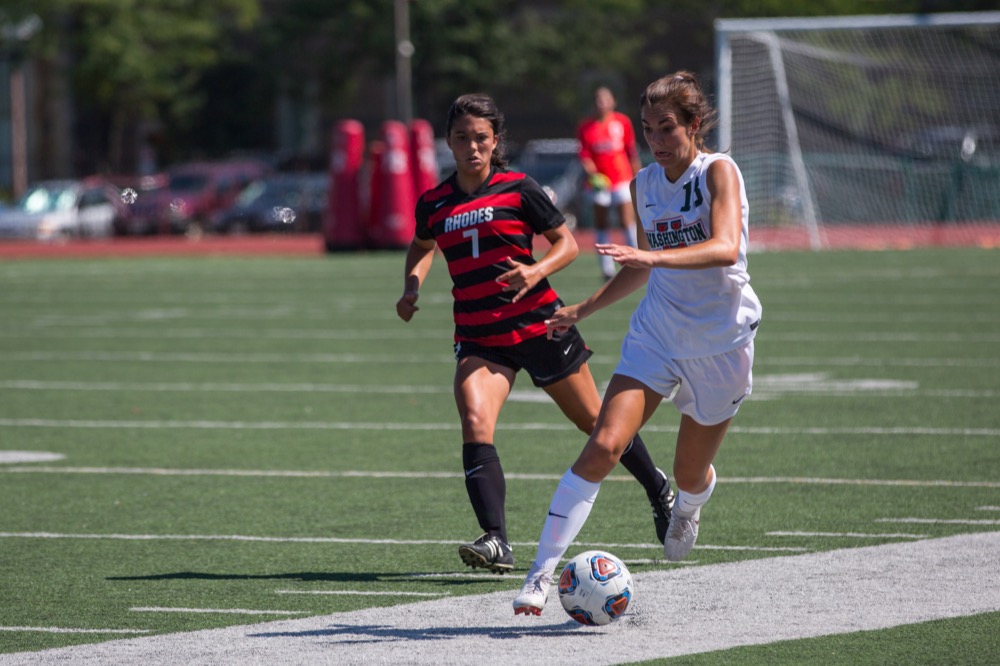 The goal was the first of Cesarone’s already noteworthy career. As a defender, she rarely gets opportunities to stuff stat sheets with shots, goals and assists. Still, her presence on the back line has been critical since she stepped onto Francis Field last fall.

Cesarone started all 22 games for the Bears as a freshman last year, serving as one of the pieces of Wash. U.’s stalwart defense. For her efforts, she was named the 2018 UAA Rookie of the Year and named to the second-team UAA All-Association team. From her role as a defender, she was one of the women that formed the wall that allowed just six goals last season.

Like steel sharpening steel, her individual talent and knowledge of soccer are amplified by the strong team around her. “We have a really good team; we’re super committed and super competitive,” she said. “That type of personality really helps us be super effective.”

Part of what made Cesarone so effective as a rookie was her communication. “A big thing for me is being able to see the whole field,” she said. “Communication is really key at my position and along that back line. Talking to the people in front of us and being able to organize people.”

Communicating and organizing people is made easier by the center back’s strong relationships with her teammates, particularly goalkeeper junior Emma Greenfield.

“One of the major things is playing with people,” Cesarone said. “[Greenfield] was behind me the whole year. You start to just get that comfort level. You start to just know each other’s tells and how they play and their style, so you build off of that.”

Greenfield concurred, adding that the two have gotten even closer since last season ended. “I went to Brazil this summer for 10 days—just me and Gabbie, playing soccer,” she said. “That’s definitely brought us really close together. Neither of us had parents there, we were the only two Wash. U. kids on the whole trip. We roomed together, we played together. Even this spring, as a group, we all came together more and as time progressed, Gabbie and I have gotten really on the same page.”

Cesarone stressed the importance of her connection to the whole team, attributing her success as a freshman to her teammates. “I came onto a team that had an amazing culture,” she said. “They had a set of standards right when we came in. They’re like, ‘this is how we play and act on and off the field.’” Playing around a plethora of talented and experienced women allowed her to play up to her potential. “I was on a team that was already super developed,” Cesarone said, adding “We’re able to bring our personal talents to the team and then build as a unit. It was a really good team culture that I was able to come into and play within that larger team”

On top of everything, Cesarone still loves playing soccer. “The biggest thing is enjoying the game,” she said. “That makes it the most fun and it also makes everyone around you better. It’s more, I think, not about the position, but the person that fills that role.”