Greenfield and the unbreakable defense of women’s soccer

The defense of the 2018 Washington University women’s soccer team was impermeable. Across an entire season, the team allowed opponents to attempt just 70 shots (for comparison, the Bears themselves attempted 533). Only 27 of those shots allowed were on goal. It is a testament to the discipline, effort, focus and skill of the whole team that its opposition generated so few opportunities.

That only six of those 27 shots actually found their way into the net is more specifically a testament to the discipline, effort, focus and skill of the Bears’ goalkeeper, junior Emma Greenfield.

“Emma is a tremendous talent, a great competitor and a great teammate,” head coach Jim Conlon said. “It’s been nice just to have her with us performing at a high level and playing with her friends. It’s great having Emma back there.”

Greenfield finished the season with the sixth-best Goals Against Average of any Division III goalkeeper at .285, setting a new school record in the process. The 13 shutouts that she posted tied for the most in all of Division III. For her performance, she was named to the all-University Athletic Association second team. Yet, despite her individual accolades, she credits the team in front of her for making her job easy.

“Last year, I had a really light season honestly.” Greenfield said. “The backline last year was just freaking out of this world. They were so good.” 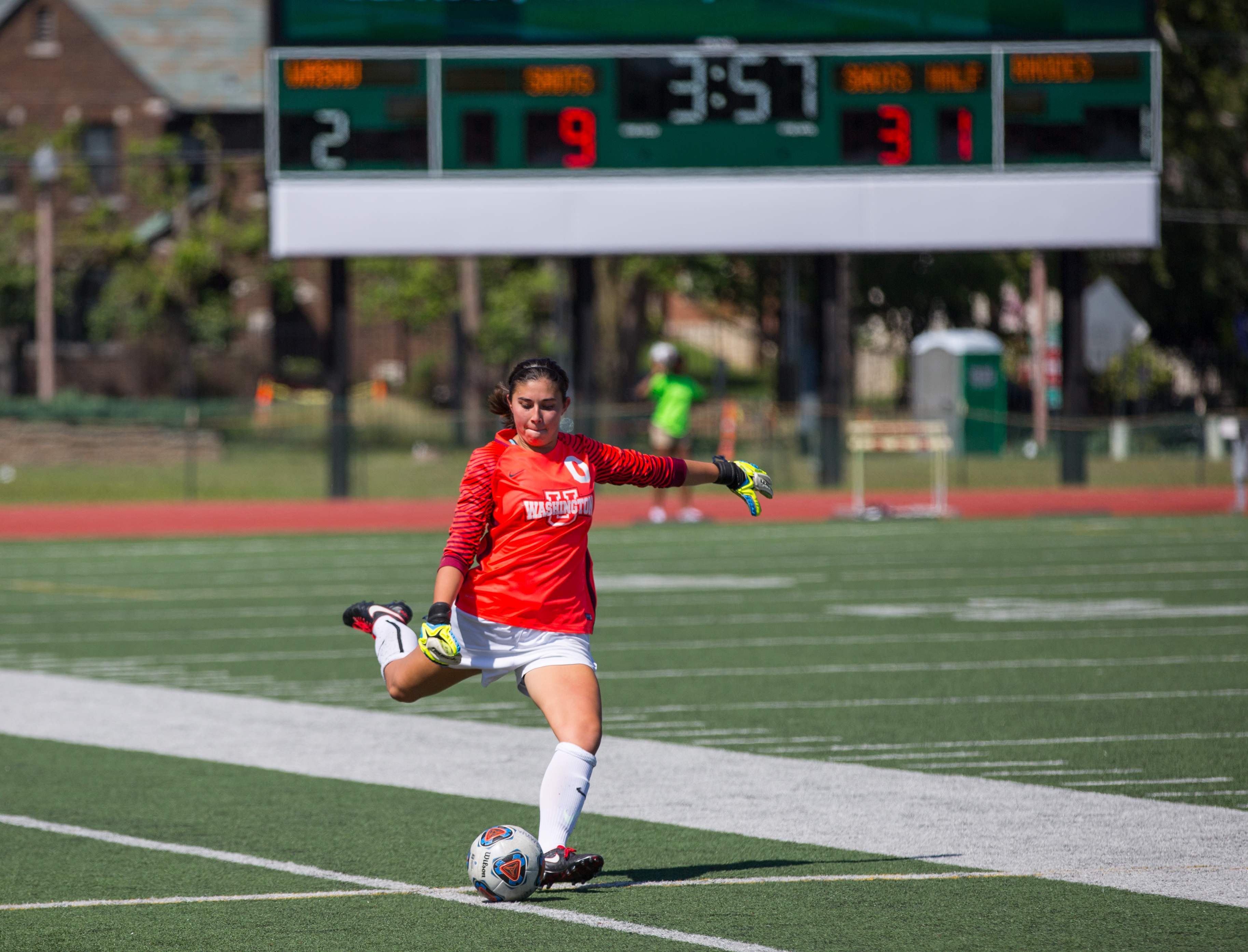 The defenders clearly kept the goalie’s workload manageable. In eight of the Bears’ 22 games, Greenfield did not face any shots on goal. However, the keeper came up big when she had to, recording two saves in a 2-1 win against Emory, four saves in a 2-0 victory over the University of Chicago, and three saves in a nail-biter versus Wheaton in the Elite Eight. Her job is not always as flashy or spectacular as those of her goal-scoring teammates, but it is a constant challenge to visualize where the other team will strike from and prevent chances from materializing.

“I’m always watching and analyzing, like ‘where can we be broken down, right now in this exact moment,’” Greenfield said. “There’s a lot of the mental game. Trying to stay tuned in. I sometimes do find myself staring off, but it’s really trying to get myself back with the team and communicating. That keeps you locked in.”

Hannah Menard, who graduated in May, was a vocal leader for the Bears last season, shouting orders and getting the defense into position to halt any run. With Menard gone, much of that responsibility will be passed along to Greenfield, along with juniors Katy Mockett and Ellie Moreland and reigning UAA Rookie of the Year Gabbie Cesarone.

“[Hannah] obviously left a void and I’m going to step up and try to fill it, but I also work along with Gabbie, who is a rising sophomore now, who has done a really good job finding her voice too. Also, in the backline, it is a pretty senior group,” Greenfield said, adding that “the communication is becoming natural between me and Gabbie. We just understand where we are on the field almost not even using words.”

Stepping up to replace the departed seniors is an example of Greenfield’s evolving role on the team. As a freshman, she joined a team that had just won a national championship. Right away, she was asked to replace two-time d3soccer.com Goalkeeper of the Year and 2017 NCAA Woman of the Year, Lizzy Crist.

“I understood that I came into a very unique situation as a freshman goalkeeper.” Greenfield said. “Freshman year was definitely a whirlwind. I was just trying to keep my feet on the ground, basically. It felt like everything was moving so fast.”

Since then, Greenfield has come into her own as both a player and a leader.

“I know my role has changed on the team,” she said. “I’m trying to be more of a leader, help direct people, and be a better teammate, even off the field. Freshman year, I was so focused on myself. This year, it’s how can I help others be there best.”

On the field, Greenfield has been a staunch force in goal. Across two years, she has saved 46 goals.

“You feel like so amped up,” Greenfield said, describing the feeling of recording a save. “I’m sure it’s similar to scoring a goal. I don’t really know for sure. There’s like so much adrenaline because that is my role back there. Everything that goes behind me usually ends up in the net, which is… yeah, it’s a high-risk, high-reward situation.”

Eleven goals have found their way behind the keeper in her time at Wash. U., including five combined goals in her three career losses. Her position demands that she not dwell on conceded points until the final whistle has blown.

“It’s got to be pretty instantaneously forgotten,” Greenfield said. “Definitely while a game is still going. The backline will usually talk for 30 seconds about the breakdown that happened that allowed it. But then it’s next play. The game keeps going. After the game, you think about it. About positioning, like where you were, what could you have done differently.”

Just as the game goes on after a goal, the season goes on after a loss. While she works to prevent the errors that allow goals to be scored, Greenfield still radiates self-assurance.

“I didn’t do this right, but I’ve done it right nine times out of ten,” she said. “It’s having that self confidence that you’ll do it right the next time.”