No. 3 women’s soccer locked in as 2019 season approaches

The Washington University women’s soccer team will start their season ranked third nationally in Division III Soccer, behind defending NCAA Champions Williams College and the 2018 NCAA championship runner-up, Middlebury College. That ranking is the final achievement earned by last year’s women’s soccer team. That team finished 21-1 and broke numerous school records on their way to an NCAA semi-final berth. Yet, despite last year’s spectacular finish and the respect garnered from their peers, the Bears remain firmly locked on making another run at greatness this season. 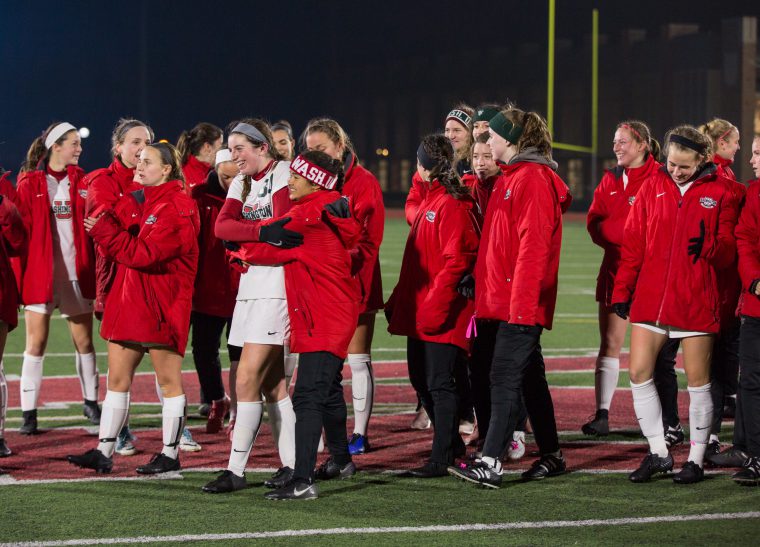 “A lot of those accolades have to do with a year ago,” head coach Jim Conlon said. “We’re just going to take it one day at a time and try to get better this season.”

Last year’s team won their first 21 games before falling to Middlebury. It was a tough loss for the Bears, but one that will not be lingering when they kick off Friday against Calvin College.

“I would have much rather lost in the final than not even getting a chance to play in the final. That was really hard to get over,” forward and captain senior Taylor Cohen said. “But, my dad always tells me ‘you get three days. You get three days to be upset, and then you gotta move on.’ It might not be exactly three days, but you still have to keep it to a short time then look to the future. And that’s all we can do. We can’t worry about the past, you just gotta worry about right now. It took a while to get over that, but obviously we’re headed into the season with a fresh outlook.”

It becomes much easier to keep your eye on the big picture when excellence is routine. Conlon’s team have won the United Athletic Association championship for four consecutive seasons and have reached at least the semi-final of the NCAA tournament in three out of the last four seasons. In 2016, they won the national championship. To Conlon, consistency comes from the mindset that the team has cultivated over the last few years.

“Our players have great focus and commitment to be standards of excellence,” Conlon said. “We’re just trying to reach our potential. When you have high standards and people believe in each other, that leads to good teams.”

Traces of the DNA of the 2016 championship team remain. Cohen was on the team when that championship was won. Seniors Jesse Rubin and Olivia Emanuel will not play for the Bears this season, but they remain presences around the team. Their experience will help drive the team as they try to continue their winning ways.

“Every year I want another one. I want to go out the way I started,” said Cohen, who scored the winning goal in that national championship. “I think we try not to linger on things that happen in the past. Each new team has new roles. You try to do your own goal without looking at what you did in years past. But, it is in the back of my mind, in the back of all of our minds. Trying to get another championship. We want to take it day by day, focus on the people we have now and try to obtain the smaller goals trying to lead to the larger one.”

Cohen is the only playing senior on the team. Instead of relying on a single senior to fill a role typically filled by many, Conlon expects his players to lead by committee.

“Right now, we’re looking for them to find their own way.” Conlon said. “I think it’s going to be a group mentality as opposed to a leader driven voice. I think everyone is going to step up in their own way, but I won’t say there’s any clear-cut leaders sticking out right now.”

While leadership for the Bears will be a team effort, Cohen will be doing her part to guide the team forward.

“I just want to be an example every second,” she said. “I want to be at my best and be an encouraging presence for the younger people on the team. Working hard, giving that extra 110 percent. We talk a lot about a mentality. Even if you think you’re done, you can push yourself that extra inch or extra minute or one more sprint. I think what I can show by leading by example and with my voice will be really helpful.”