Washington University sophomore Eka Jose became a track and field national champion after achieving a distance of 12.16m in the triple jump event at the NCAA Division III Indoor Track and Field National Championships in Boston last month. Although this was her first national championship title, it was not even her biggest jump yet.

“It actually wasn’t my best jump of the season,” Jose said. “That came at the very first meet in December right before winter break. The way the rankings work for track and field is that to qualify for Nationals you have to have a top-20 mark against everyone in DIII, and it doesn’t really matter when you achieve that mark. I hit it at the very first meet, so that kept me on top the entire season.” 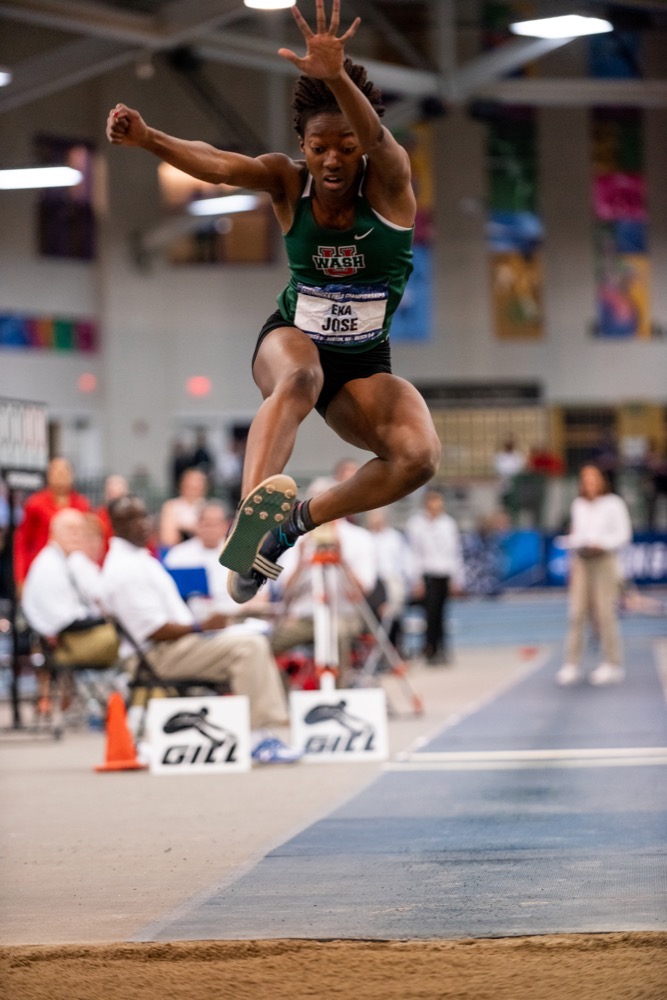 Jose set the Wash. U. Indoor Track and Field triple jump record with a jump at the Titan First Chance meet in December, achieving a distance of 12.29m. Although she was projected to score the highest at last month’s championship, Jose was still surprised when she learned of the results.

“After I had the big jump in December and I was able to continue it, it [the Championship] became more of a reality that was something that was feasible for me,” Jose said. “And when it happened, it was still kind of a shock, because really what you’re projected to do coming in doesn’t really matter until how you perform on that day. So, you never know, someone could have the best day of their life or of their season, or you could have a subpar day. So during that competition, I really just focused on myself.”

Jose is a Global Health & Environment and Biology double major from Kansas City, Missouri. Although she has been an athletic person for her entire life, playing basketball throughout her childhood, Jose only started running track and field in eighth grade, which she continued to do throughout high school.

“Early in high school I always wanted to go [Division I], but as I got closer to college, getting an education became more important to me,” Jose said. “Wash. U. seemed like the perfect place for me to both get a great education and be involved on the track team.”

However, that opportunity has not come without its challenges, as Jose suffered injuries throughout last year.

“Last year my biggest challenge was dealing with injuries and just recovery, so I struggled with that basically the entire year,” Jose said. “I worked a lot over the summer in just recovering and resetting my body and getting strong again so that I could set myself up for a successful preseason and season this year.”

In addition to being on the track and field team, Jose conducts biology research and is a member of the African Students Association and the Catholic Student Union. Although balancing all these activities has been difficult, Jose expressed that her commitments have helped her stay on top of her work.

“For the most part, it’s very manageable, but during the peak exams seasons, which a lot of times coincides with Indoor season when we’re traveling a lot, that can get super stressful because you lose a big chunk of your weekend and your entire Saturday,” Jose said. “But that’s also forced me to be really organized. I have learned to manage my time more effectively.”

Jose also noted that her teammates have been a great source of support. Though she participates in mainly individual events, including the triple jump, indoor 60-meter dash and outdoor 100-meter dash, Jose emphasized the importance of teamwork in track and field.

“Whenever we go to these big meets like Conference or Nationals, we always talk about like passing the invisible baton,” Jose said. “Kind of like a relay. So the first person to compete that day starts with a baton and during your performance, after your performance you pass it off or pass off the momentum to the next person. So even though it is individual, I still have the motivation of, ‘I’m doing this to contribute to the team points so that the entire team can win.’”

Looking forward, Jose is excited to continue improving her triple jump technique, as she sees that as key to successfully completing bigger jumps in the future.

“My main goal is just to continue developing and perfecting different parts of my jump,” Jose said. “Like the technique. Because I know that once I’ve mastered or developed those I’ll be able to produce bigger jumps. I really don’t like to have a specific number in mind, because if I say I want to jump this far, the only way I can really achieve that is by working on my technique.”