This weekend, the No. 18 Washington University baseball team picked up four wins against Brandeis, sweeping the series and moving to 20-3-1 for the season. After the weekend of high-scoring play, over which the team put up a staggering total of 40 runs, the Bears have now won 11 straight games.

The Bears started out their weekend of play on Friday, coming out of the gate firing, as shortstop freshman Caleb Durbin doubled to left field to lead off the game. One batter later, first baseman junior John Brinkman knocked a single to right field and Durbin ran home to chalk up the first of the Bears’ many runs. Surprisingly, the Bears then went scoreless for the next four innings.

Then, in the fifth, the Bears took advantage of Brandeis errors to score three runs and begin to break the game open. On base yet again, Durbin scored from first base after the Brandeis right fielder misplayed catcher junior Thomas Gardner’s double. Gardner then scored on a wild pitch before Brinkman soon followed him home as freshman designated hitter Brendan Hall reached on an error by the Brandeis second baseman.

As the game went on, the Bears continued to pile up runs, with Durbin, Brinkman, freshman Bo Anderson, centerfielder junior John Ostrander, left fielder sophomore Johnny LaMantia and right fielder freshman Jackson Gray all driving in runs. The game would end 15-0 for the Bears, as they got their weekend off to a dream start with a huge first victory. 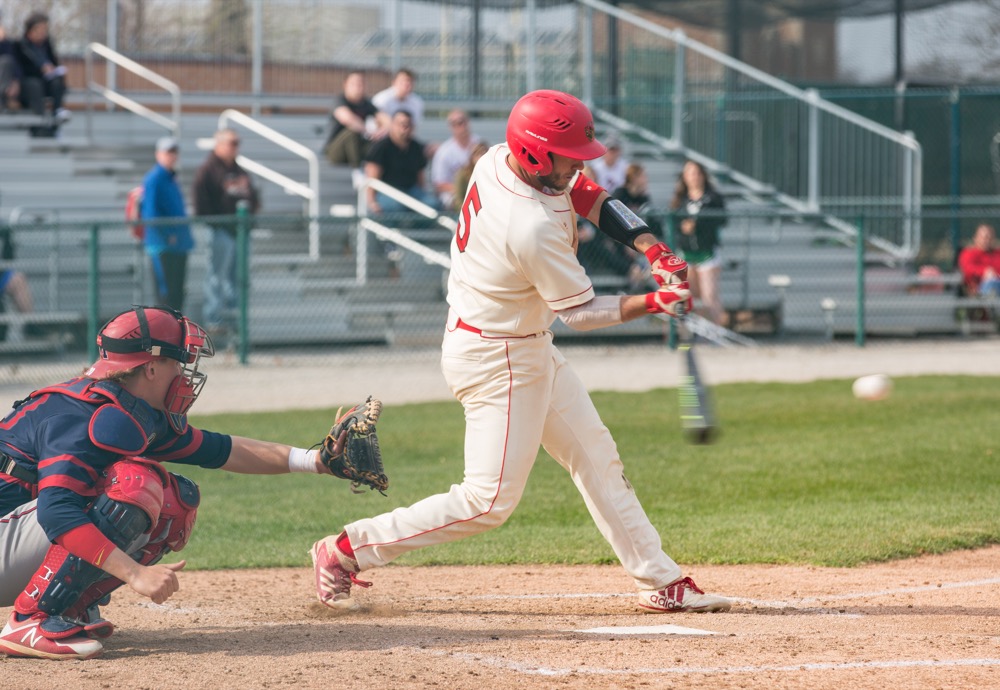 The first game of Saturday’s doubleheader would prove to be the closest Brandeis came to knocking off the Bears, as the game was forced into extra innings after the teams remained tied at 3-3 after nine innings. Both teams began the game hitting well, and each team scored two runs in the first inning. Brandeis then took the lead in the third with a run-scoring double.

Then, in the top of the ninth, Brinkman hit a sacrifice fly, allowing second baseman senior Evan Nagel to score the game-tying run. In extra innings, Nagel hit an RBI single to center field, allowing third baseman freshman Tim Van Kirk to score the go-ahead run for the Bears. Brandeis had a chance to tie the game in the bottom of the 10th, but Brinkman, now pitching, struck out Brandeis’ last two batters to give the Red and Green the 4-3 win.

Both Saturday’s second game and Sunday’s game proved to be more one-sided wins for the Bears. In Saturday’s game, the Bears recorded runs in seven of the nine innings to cruise to a 10-4 victory, with RBIs from Brinkman, sophomore Collin Kahal, Durbin and a two-run homer from catcher freshman Zac Styka. Also, sophomore pitcher Jared Fong recorded the first win of his career, chalking up four strikeouts.

Finally, in the fourth and final game of the series, the Bears would turn the game into a rout. After scoring four runs in the fifth inning and then six more in the seventh, the Bears closed out their sweep of Brandeis in emphatic fashion: an 11-0 mercy. It was the eighth time this season that the Bears had reached double digits.

While the weekend’s focus was on the Bears’ offensive outburst, the Wash. U. pitchers performed well too. On Friday, starting pitcher senior John Howard held the Judges to just two hits over eight scoreless innings, lowering his already-astounding ERA to 1.24. In the first game Saturday, sophomore Ryan Loutos carried the Bears, hurling six strong innings before freshman Matt Lopes entered in long relief, holding Brandeis to just one hit over three innings for his first college victory. A committee of Bears held down the fort in the second game Saturday before junior Matt Ashbaugh and sophomore Tim Tague combined to throw a one-hit shutout against the Judges on Sunday.

The Red and Green will return home next weekend for their series against New York University, beginning Friday, April 12.