The Washington University track and field teams dominated at the Wash. U. Invitational this weekend, featuring numerous first place finishers and sweeping the team competitions in commanding fashion. The women’s team accumulated 239 points over the 18 events, more than doubling second place Wartburg College’s 103, while the men’s team was the only one to crack triple digits, scoring 186 points across the invitational’s 18 events.

The Bears started the weekend strong with exceptional performances in Friday evening’s Distance Carnival. Wash. U. had the top two times in the women’s 10,000-meter run, with graduate student Aly Wayne’s time of 35:39.62 just half a minute behind the top finisher at last season’s national championship. Junior Sophie Watterston followed close behind, running a personal-best 35:52.43 to come in second place. 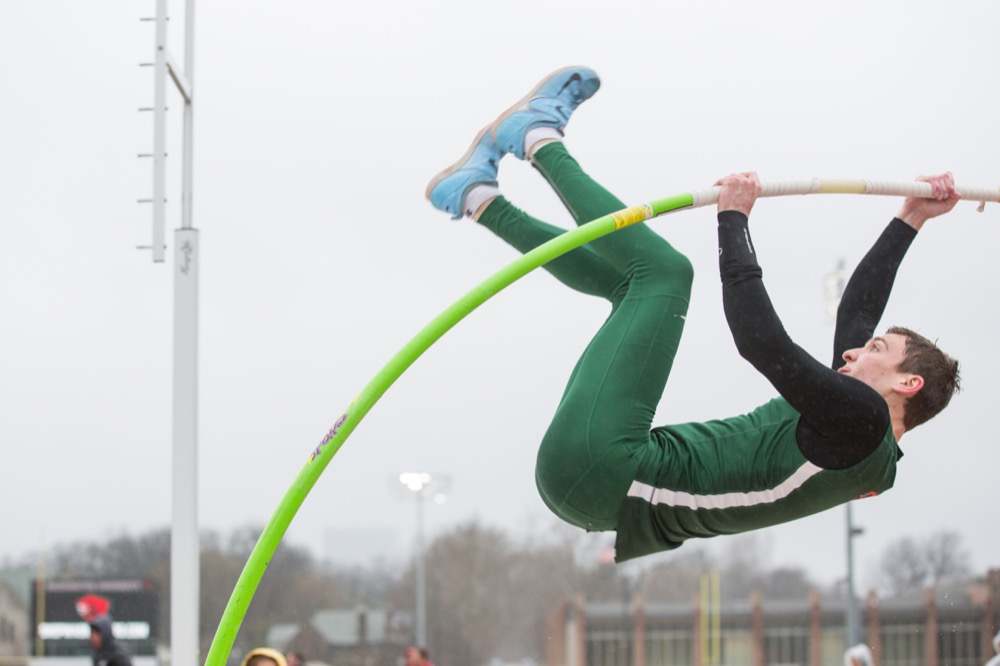 Tim Goblirsch lifts himself through the rain Saturday afternoon at the WashU Invitational. Goblirsch was one of fourteen Wash. U. first place finishes and won pole vault at 4.10 meters.

The men’s team was also successful on Friday, as junior Nick Matteucci and senior Brad Hodkinson took third place in the 5,000-meter and 10,000-meter runs, respectively. Senior Daniel Tyszka took fourth in the hammer throw with a distance of 47.67 meters, his personal best.

On Saturday, even as umbrellas flipped upward in the wind and the puddles pooled in the long jump pit, the Bears kept fighting. Pounding rain and unseasonal cold set in overnight, causing some contenders to drop out of the invitational and the cancellation of the high jump, triple jump and women’s pole vault, but for the most part the invitational carried on as planned. The Bears swept the 800-meter run, with freshman Grace Bristow winning the women’s race and sophomore Arthur Santoro the men’s race.

Next Friday and Saturday, the Bears will visit crosstown rival Saint Louis University for the annual Billiken Invitational. The team will look to build off this weekend’s run of successes and continue to prepare for the University Athletic Association championships at the end of the month.