Softball sweeps No. 4 Illinois Wesleyan, swept by No. 8 Coe

The Washington University softball team went into this past weekend with a 5-5 record looking to break .500 and get their positive momentum flowing for the remainder of the season. To do so however, they had to face off against not one, but two ranked teams in a total of four games. Their opponents, being No. 8 Coe College and No. 4 Illinois Wesleyan University would definitely make the Bears work for a win.

Starting off with the first game taking place Saturday morning against Coe, sophomore Abby Graegin (4-0) and Coe senior Alyssa Olson (9-0) both took the mound in hopes of giving their team the best chance to win. 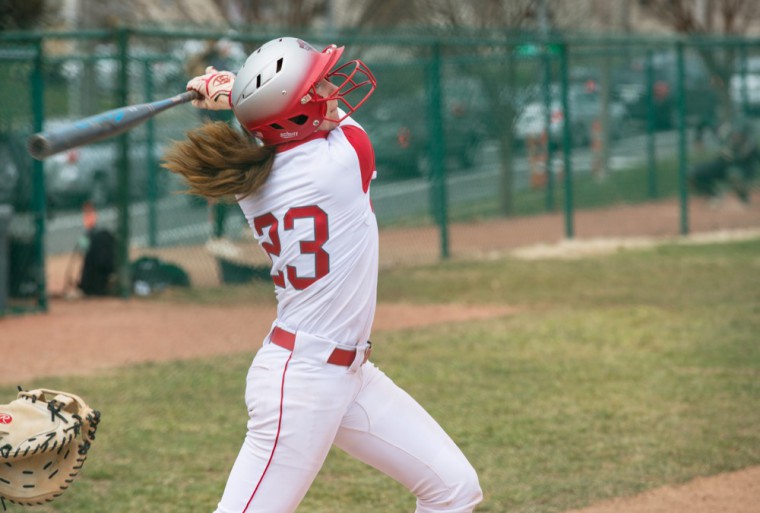 Freshman Kirsten Drabek hits a double for the Bears in the second game of the Schutt Invitational against Illinois Wesleyan University Saturday.

Coe would get their first opportunity to score with two outs and the bases loaded in their half of the first inning, but Graegin managed to catch Coe senior Madi Miller looking to end the early threat. Later in the third inning, Coe had players on second and third with only one out. Capitalizing on the situation, Coe sophomore Megan Weber managed to drive one up the middle towards second base, scoring sophomore Kelsey Hora to make it a 1-0 game. Wash. U. would attempt to respond with a player on third with two down in the bottom half of the inning, but freshman Katie Gould grounded one up to Olson to end the inning.

Graegin left in the fourth and was relieved by freshman Holly Stoner after allowing back to back singles to start out Coe’s half of the inning. Stoner would come out relatively unscathed as she managed to get out of the inning by forcing Hora to foul out to third base. Stoner struck out the side the next inning after getting the bases loaded. She would end up with a total of six strikeouts in 4.0 innings pitched. Coe would manage to add an insurance run in the sixth after a couple of errors, which lead to an RBI single from senior Allie O’Brien, making the score 2-0. That would also end up being the final score, as Coe limited Wash. U. to two base hits, a double from Gould in the first and a bunt single from junior Amy Walsh in the third. What ended up being a pitcher’s duel ended in the Kohawks’ favor.

Both starters were great at keeping the opposing team working to try to get on the scoreboard, as only 12 hits were allowed from both sides throughout the entirety of the game. It was a good, old-fashioned pitching duel that had the audience begging for a run to be scored. Wash. U. would get an opportunity in their half of the fifth inning, when they managed to get a runner on third after a sacrifice bunt, but Wiegand struck out both the next two batters to eliminate the threat. The next inning, however would end up being fruitful to Wash. U., as two doubles drove in Walsh to make the score 0-1 with an inning and a half to go. Illinois Wesleyan did a good job to respond in their half of the inning, managing to fill the bases with runners on first and second with only one out. Coe senior Julie Josten singled to get one through the right side. The runner from second decided to test Gould’s arm out in right field, and she’s thrown out at home. The score remains 0-1 as the teams headed to the last frame. The top half went by quick as Wiegand took care of the Wash. U. offense in order, giving her team the chance to win the game. Wiegand ended with 15 strikeouts and allows only four hits, and it was up to her offense to get her the win if they could manage.

Denton came out on the field looking to secure the win for her team. However, an error and a couple of back to back singles lead to an undesirable situation. Bases loaded, nobody out. The audience was on the edge of their seats in anticipation for what was to come. The pitch, Coe freshman Haley Earl hits one to freshman shortstop Kirsten Drabek, she throws home for the force out. One down. The pitch, Coe junior Sam Berghoff once again hits one toward Drabek, and once again, throws the runner out at home. Two down. The pitch, Coe freshman Colleen Palczynski grounds one to Denton, and she gets thrown out at first. Game over. Wash. U. manages to extinguish the fire to win the second game 0-1.

The third game of the weekend would once again be against Coe College. Wash. U.’s Denton (4-2) seeked her second win in as many games against Coe sophomore Bailey Smith (6-2) Wash. U. had the intention to get revenge on Coe, but Coe had other plans to say the very least.

The Kohawks wasted no time in getting early separation, as they quickly filled the bases with runners with two down. A single down the third base line and an error brought in two to make the early score 2-0. After Smith’s second 1-2-3 inning, Coe added another run off a double by O’Brien, making the score 3-0. Wash. U. would not get on base until the fourth inning off a double by Gould. However, this spark of offense would not lead to any resurgence against the considerable deficit they found themselves in. Not until the fifth inning would Wash. U. get on the scoreboard when sophomore Julia Flores knocked one to center field, which gave Drabek enough to score off the sacrifice, now making the score 3-1. Despite the effort to get back into the game, this run simply wouldn’t be enough, as Coe had a four run bottom of the sixth to make the final score 7-1.

The last game of the weekend for Wash. U.’s team would have Wash. U.’s Abby Graegin (4-1) face off against Illinois Wesleyan junior Brea Walker (4-1).

Wash. U. was the first to strike blood, as an RBI single from senior Taylor Arends brought in Gould to make the game 0-1 in the first inning. This score would be followed by a big fly by sophomore Kendall Schwartz, making the score 0-2. Illinois Wesleyan would join in on the home run hype with a dinger of their own in the third, cutting the lead in half. Not stopping there, Illinois Wesleyan scored two more runs off a passed ball and a bunt base hit in the fourth, making the score 3-2 in favor of the Titans. The Bears would promptly respond in their half of the fourth, tying the game at three a piece after the RBI single by sophomore Natasha Ramakrishnan drove in junior Hannah Bloom.

Fast forward to the Bear’s half of the fifth, where a wild pitch allowed Walsh to score, giving Wash. U. the one point advantage. After a relatively uneventful sixth, the seventh inning came along to give the audience a show that they wouldn’t forget for a good while. Illinois Wesleyan tied the game off a throwing error by Ramakrishnan. Soon after another single put runners on first and second, a single by Illinois Wesleyan junior Brittany Murphy caused two runners to score off two errors in the play, giving the Titans a solid two run lead heading in the bottom of the frame.

Wash. U. started what was one of the more inspiring comeback victories with a leadoff triple by Arends, who then scored off of a groundout to second base. That first out was followed by a double by Drabek and a single by Schwartz. After a throwing error, Wash. U. suddenly had runners on second and third with only one out. Freshman Nicole Hay was up to bat. She hits a single towards right field to bring in Drabek. The game was then tied at six runs with runners at the corners and with only one out. Ramakrishnan came up to the box. The pitch, a single down left center field. Schwartz comes in to score the walk off run and Wash. U. wins the game with a final score of 6-7. This slugfest was definitely one for the memory book, as a total of 24 hits were recorded and 13 runs were scored.

At the weekend’s conclusion, the softball team brought their record to 7-7, keeping it at the .500 mark. They will continue their pursuit to bring it above that mark tomorrow at Fontbonne University.