The Washington University baseball team won three games this weekend against Illinois Wesleyan to sweep the series, continuing a hot streak that stretches back to the beginning of March. The Bears shut out the Titans on Saturday, 6-0, before eeking out the double-header’s second game, 2-1, and finishing in dominant fashion on Sunday, 6-2. With the wins, the team has now won 10 of its last 11 games and has improved to 12-3-1 on the season.

Strong pitching was crucial to the Bears’ success all weekend long. Senior John Howard hurled eight scoreless innings in the first game on Saturday, allowing just six hits and two walks on the day, while sophomore Ryan Loutos and junior Matt Ashbaugh each provided strong starts for the Bears later in the weekend. Howard—named a preseason All-American in January—has allowed just two earned runs since March 1, and now sports a 1.24 ERA on the season.

Red and Green relievers were on point as well, pitching a combined nine innings over the three games, yet only allowing one run. Freshman southpaw Matt Lopes struck out four Titans in three innings on Sunday, allowing no base runners and picking up the second save of his young Wash. U. career. He combined with Ashbaugh and sophomore Rees Viersen to allow no walks on the day, pounding the strike zone and being unafraid of contact.

As they have throughout the early parts of this season, the Bears also thrived on the offensive side of the ball. They never trailed the Titans and, despite just three extra-base hits total, converted hits into runs easily. Shortstop freshman Caleb Durbin, who has recently cemented himself as the team’s leadoff hitter, continued his success at the plate with five hits on the weekend. Though he lost his 14-game hitting streak on Saturday afternoon, he bounced back on Sunday with three singles, a walk and a stolen base, setting the table for the Bears throughout. 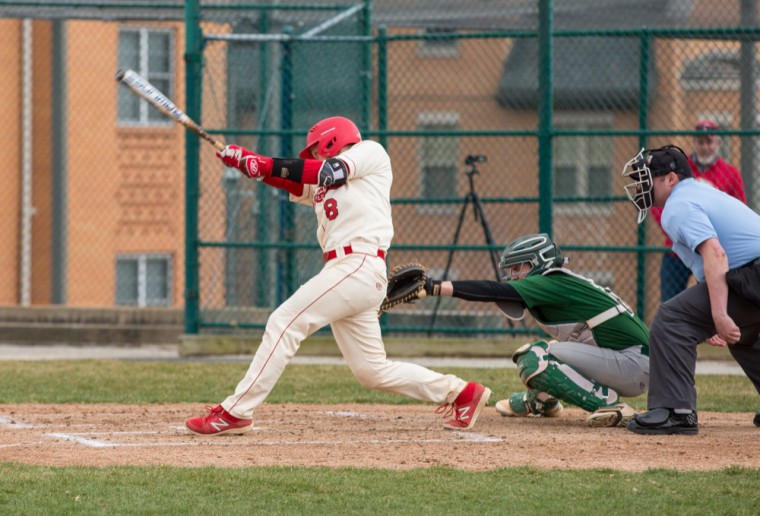 Another standout freshman, outfielder Jackson Gray, had a powerful weekend at the plate, driving in three runs and bringing his batting average up to .313 on the year. Gray helped get the Bears’ offense started in the first inning on Sunday when he ripped a line drive that whizzed just past the head of Illinois Wesleyan starter Eric Bennes to score second baseman sophomore Evan Nagel. The Bears then added two more runs in the first, staking Ashbaugh to an early 3-0 lead.

“Pitching with a lead is always nice. It takes the stress off and kind of just lets you relax out there,” Ashbaugh said after the game. “Those early game jitters you can have go away when your offense produces like that.”

Aggressive baserunning was a major part of the equation, as the team stole 11 bases over the three games. While eagerness on the basepaths harmed the Bears’ offensive chances early on Sunday—two runners were picked off first base in the game’s early innings—the team’s base stealing success also contributed directly to runs when hard singles to center field scored runners from second base with two outs. Stellar defense also played a role for the Bears, as they made just one error all weekend.

The Red and Green look to keep on winning this week with a home game Thursday afternoon against Iowa Wesleyan and the team’s first conference games next weekend, in a four-game series against Case Western Reserve University in Ohio.