No rest for the weary: Baseball, softball get to business over spring break

With the Washington University women’s basketball team’s postseason hopes dashed in the NCAA Division III Sectional Final March 9, the Bear sports calendar officially flipped to spring. Here’s a roundup of what you might have missed as the Red and Green played ball. 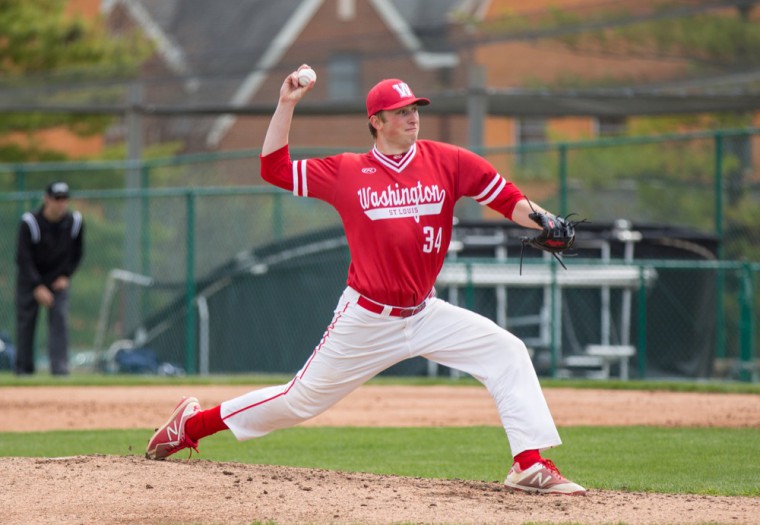 Ryan Loutos throws a pitch in a game against Case Western Reserve University April 20, 2019. Loutos took the mound twice for the Bears over their 7-1 spring break trip, including a 13-strikeout shutout against No. 13 Concordia University Texas.

The baseball Bears got off to the mildest of starts before beginning their spring break stretch. Wash. U. entered the week an even .500 at 2-2-1, including a pair of one-run losses and a tie. That changed quickly once classes took a pause, as the Red and Green ripped off seven straight victories before dropping their final game, 8-2. They made no question of their dominance either, outscoring opponents 49-16 during the streak.

It started with a three-game sweep of Luther College at nearby Car Shield Field in O’Fallon, Mo. Senior starting pitcher John Howard got Wash. U. off to an easy start with eight breezy shutout innings featuring nine strikeouts and no walks in a smooth 7-0 contest.

Sunday’s doubleheader was trickier: In the first affair, an eighth-inning error allowed Luther to tie up the contest, but senior second baseman Evan Nagel delivered a walk-off double in the bottom of the 11th to capture the series win for Wash. U. Hours later, the Bears broke out for another 7-0 lead, but barely held on for an 8-6 victory.

Wash. U. then headed to Florida for its annual spring break pilgrimage, featuring two shutouts—these behind sophomores Tim Tague and Ryan Loutos, who each went seven frames. In the latter, Loutos fanned 13, allowing just three hits and walking one while throwing 94 pitches against No. 13 Concordia University Texas. The gem wrapped up a quick doubleheader sweep of Concordia, who fell 5-4 in the first game.

The trip also included a 17-4 laugher in favor of the Bears, who had four hitters with three hits, including freshman shortstop Caleb Durbin, who smacked Wash. U.’s first home run of the year. 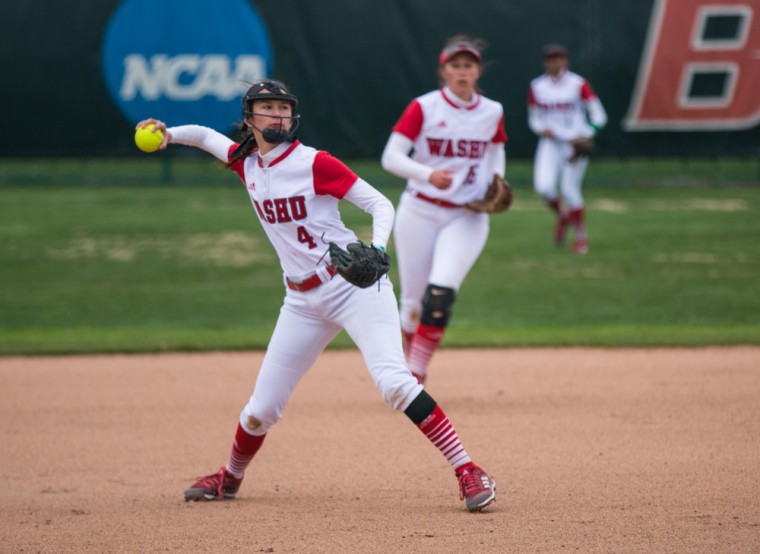 Mikaela Arredondo throws out a runner during the Bears’ game against Emory, April 6, 2018. Arredondo had 11 hits over spring break, including two triples against Susquehanna.

Due to cancellations, the softball team only got going during spring break––and they really got going. Like the baseball team, the softball Bears opened the spring games with a 7-0 shutout, this one over No. 18 Rhodes College. Freshman starting pitcher Madison Denton got the opener in her college debut, delivering a shutout and allowing only five baserunners across seven innings, in an efficient 88 pitches to boot.

That performance set the tone for the Red and Green over the first half of their 10 games, as Wash. U. moved to 4-1 over the first five. Denton was key in another two of those victories, finishing two more complete games—neither quite as dominant as the first, but effective, nonetheless.

In the back half of the stretch, the Bears flipped the script, going 1-4 as Denton faltered to fall to 3-2 on her ledger. Defense hurt Wash. U. in a pair of narrow 5-4 defeats to Thomas More College and DePauw University, as two unearned runs in each proved to be the difference.

The Bears don’t leave the Lou for a while, but it’ll be a daunting task. This weekend, the Bears host two each against No. 8 Coe College and No. 4 Illinois Wesleyan. After a brief trek down the road to Fontbonne University, Wash. U. hosts four UAA contests apiece versus Brandeis University and Emory University.