The Washington University men’s basketball team bested New York University and Brandeis University this weekend, but their efforts weren’t enough to give them a chance to capture a UAA championship. 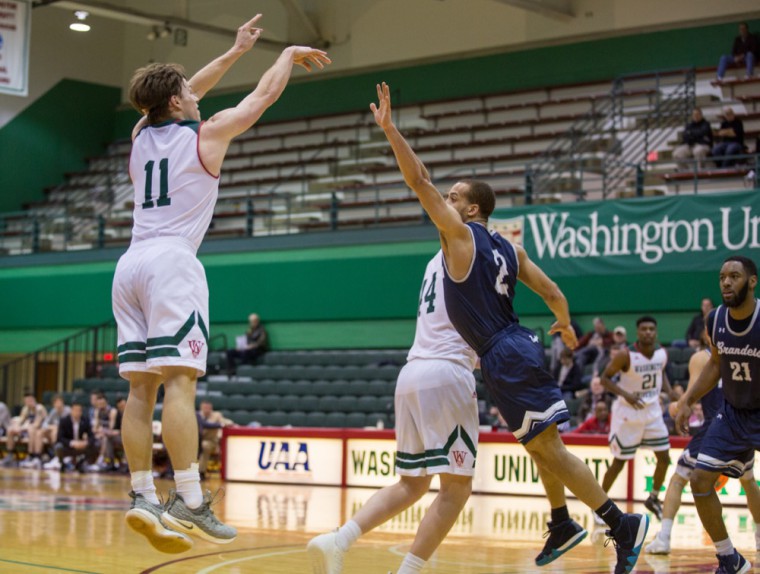 Wash. U. guard Matt Nester takes a three-point jump shot against Brandeis University. Nester made both of his three-pointers and scored 12 points to help the Bears to a 75-54 victory.

On Friday night, they tipped off against NYU, still in contention for the conference title. If they took care of business, and the University of Rochester and Emory both lost, Wash. U. still had a chance to compete for first in the UAA.

Following a brief two and a half minute scoring dry spell, Hawkinson was the first to draw blood with an and-one layup conversion inside the paint off the foul by Wash. U. junior center Hank Hunter. The low scoring would persist for a majority of the first half, as it took slightly over seven minutes for either team to hit double digits. Wash. U. managed to capitalize on whatever points they got at a rate better than that of NYU, and they lead by as much as 11 points with just over five minutes left in the half. Sophomore guard Jack Nolan helped them accomplish this control of the tempo with his contribution of 13 points in the first half. The half would eventually end with a comfortable seven-point lead for Wash. U. with a score of 30-23 as the Bears and Bobcats headed back into the locker rooms.

The second half indeed started off with a bit of a bang, as Wash. U. went on a quick 7-0 run highlighted by the steal by freshman forward Justin Hardy that was quickly followed by a smooth slam dunk. NYU would answer right back, making a valiant effort to catch up and narrow the gap, but they were only moderately successful at doing so. They were only able to trim the lead down to four points, but, thanks to Wash. U. junior guard Matt Nester, the gap did not stay so narrow. Scoring 14 points in the last ten minutes of the game, including five of six from the field and four of five on his three-point shots, Nester made it difficult for NYU to find their way back into the game. The dominance by Nester in the second half paved the way for Wash. U. to take the victory with a final score of 73-54.

Nester had a career day, dropping 22 points, three rebounds and assists a piece, and two steals to top off his final box score. NYU’s Hawkinson did not trail by much, as he scored a total of 17 points and hauled in a team tie for best with eight rebounds. Wash. U. junior guard Jonathan Arenas hauled in a game high of 11 rebounds. Overall, Wash. U. shot 50 percent from the field, 45 percent from three-point land, score 19 points off of NYU turnovers and had decent bench contribution, with 18 points coming off of the pine.

The next game was against Brandeis University, who was not far behind Wash. U. in the standings, with a 7-5 record (compared to Wash. U.’s 8-4 record) coming into Sunday morning’s showdown.

The first half played out very similarly to Friday night’s game, as both teams struggled to score. The game was tightly contested early. There were six lead changes in the first half, with Brandeis leading by as much as seven and Wash. U. leading by as much as three. A fade away jumper by freshman forward Kameron Mack gave Wash. U. the one point edge as both teams headed to the locker room with the score standing at 29-28.

The second half picked up where the first half left off, with constant back and forth blows. For the first eight minutes, Wash. U. held the lead, but Brandeis stayed within striking distance. Wash. U. took control in the last 12 minutes. A brief 7-0 run gave Wash. U. the separation that they needed as Brandeis began to lose their focus and start shooting more out of desperation. The game was never in question after this point, and as the Bears coasted to a 75-54 victory.

Notable game statistics include double digit scoring from four of the five Wash. U. starters, with Nolan scoring a game-high 23 points, followed by Hardy and Nester with 12 apiece, and Arenas with 10 points. Hunter lead the game in rebounds as he hauled in 14 by the end of the early afternoon. Overall, Wash. U. shot 51.8 percent from the field, 35.5 percent from three-point land, outrebounded Brandies by 10 and lead Brandeis in second chance points and points in the paint.

Wash. U. is now in third place in the conference behind Emory University and University of Rochester, who play each other on the final day of the regular season. This scheduling means that despite two wins this weekend, the Bears will be cut out from the top of the UAA standings no matter what happens next week.

Wash. U. will attempt to finish the season strong and make their case for an at-large bid to the NCAA tournament against the University of Chicago on Saturday, Feb. 23 at 3 p.m. in Field House.