This weekend, the Washington University women’s basketball team picked up two convincing wins away from home against New York University and Brandeis. Wash. U. dominated both games from start to finish finding ways to score from both within the paint and beyond the arc. 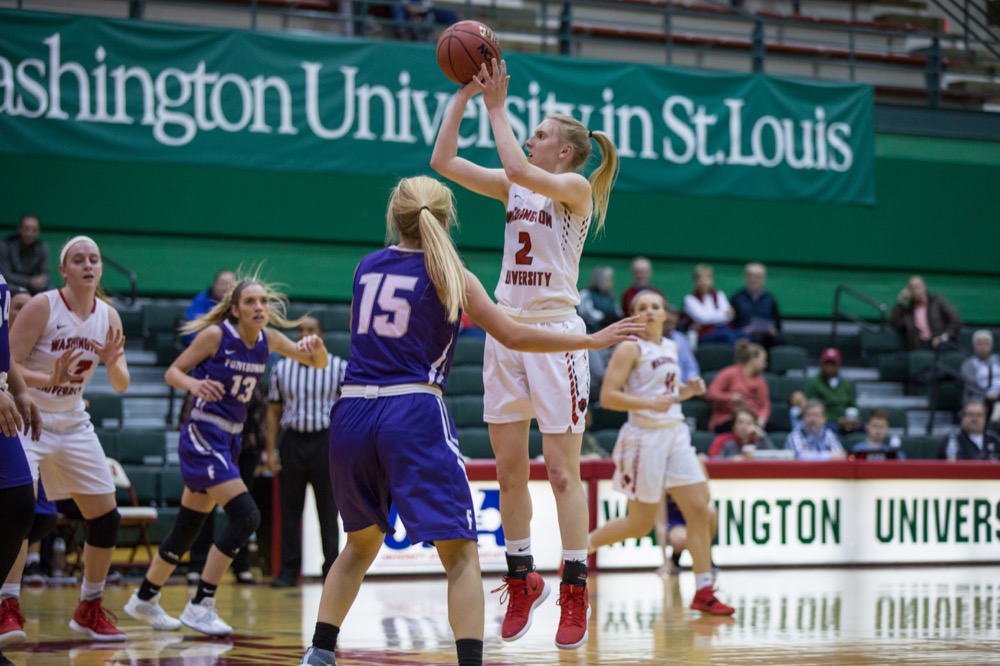 The Bears’ weekend of play began Friday night in New York, as Wash. U. defeated New York University by a final score of 76-61. While the Bears did struggle with turnovers (recording 21 to NYU’s 17), the Bears dominated in the paint, while also shooting 47 percent from the field. However, the biggest factor by far in the Bears’ win was bench production. Wash. U.’s bench outscored the NYU bench 30-4, showing a clear advantage in team depth over NYU. Senior forward Madeline Homoly recorded a double-double for the Bears, scoring 27 points and pulling down 11 rebounds. With her performance, Homoly moved up to 10th in Wash. U.’s all-time scoring list with 1,115 points. Senior guard Becca Clark-Callender also dished a team-high seven assists. Last, and certainly not least, coach Randi Henderson reached a momentous milestone in her coaching career, as she recorded her 200th career win Friday night.

After a great performance in New York, the Bears moved on to face Brandeis Sunday. The game began with both teams trading baskets. The Bears’ lead did not begin to expand until late in the first quarter. Then from the final two minutes of the first and into the beginning of the second, the Bears went on an 8-2 run, extending their lead to 24-15 a minute into the second quarter. The second quarter would prove to be crucial for the Bears, as they quickly began to pull away from Brandeis. The Bears began to capitalize off of Brandeis’s mistakes, as Brandeis racked up six turnovers in the second quarter. The Bears’ offense also began to start clicking, with players like junior forward Kristina Schmelter, senior guard Caroline Ballard, and senior forward Stephanie Botkin putting up points for the Bears. By halftime, the Bears had extended their lead to 16, as they went into the locker room leading 45-29.

While at this point in a game, some teams would have taken their foot off of the pedal, the Bears never looked back. Wash. U. recorded a Golden State Warriors-esque performance, exploding for a huge third quarter offensively. Scoring 29 points in the quarter, the Bears’ offense kept the momentum they gained from the first half, as Botkin began to heat up from the field. By the end of the third, the Bears’ lead had ballooned to 24, as Wash. U. took a 74-50 lead into the final quarter of play. From there Wash. U. kept the pressure on and cracked triple figures to top Brandeis 101-67. Botkin recorded a team-high 20 points, while for the second game in a row, Clark-Callendar lead the team in assists.

The final horn of the Brandeis game ended a productive weekend for the Bears, as they picked up two crucial wins on the road. With these two wins, the Bears moved to 11-5 on the season, and 5-0 in UAA play. Next weekend, the Bears will take on Carnegie Mellon on Friday and Case Western on Sunday, hoping to continue their impressive win streak.