While most students recovered from their first week of classes, the Washington University men’s basketball team traveled east to take on two conference opponents this weekend.

The Bears opened the weekend against the Violets of New York University, who came into Friday night’s contest with a three game losing streak and a 6-8 record overall for the season. NYU had also not won a conference game up to this point (0-3), and they were looking to change that for the better.

Junior DeVaughn Rucker pushes toward the basket against Fontbonne University defense in December. Friday, Rucker scored 18 as the Bears beat New York University on the road, 91-70.

On the other side of the coin, Wash. U. held a steady 8-6 record with only one conference win under their belts, looking to add more before heading back to St. Louis. After tying a single game record for three pointers (17) in an exhilarating upset against nationally ranked University of Rochester squad the week prior, they were looking to ride that positive momentum to climb the standings as much as they could.

Following the opening tip off, neither team pulled away and the game became a back and forth showdown for the first ten minutes of the game. Exchanging leads appeared to be the name of the game until junior center Hank Hunter ignited the start of a 13-0 run midway into the first half with a tip-in second chance bucket. The Bears kept the lead hovering around ten points for the remainder of the first half until they ended things on a four point play by sophomore guard Jack Nolan. Wash. U. went back to the locker room with a comfortable 15-point lead.

Wash. U. stood their ground against NYU’s aggressive start to the second half. Despite their best efforts, NYU would only manage to shave the lead to 11 points five minutes into the half. After those first few minutes, the Red and Green took control of the game. The Bears gradually increased their lead up to an insurmountable 26 points several times late in the contest. The game ended with an unceremonious blow-out, 91-70.

This victory added to Wash. U.’s dominant history against NYU, marking their sixth win in a row against the Violets, and making their overall record against them 48-15.

Hunter, who scored a game high 22 points including 14 in the first half, tied with NYU’s forward Bobby Hawkinson with a game high of 12 rebounds. His presence and dominant play helped the Bears grow their impressive lead. Three other Wash. U. starters joined Hunter with double digit performances, including sophomore guard Jack Nolan with 15, freshman forward Justin Hardy with 13 and junior forward DeVaughn Rucker with 18. Nolan was perfect from behind the arc, making all four of his attempts from three point land.

Wash. U. shot an impressive 51.4 percent from the field, 45 percent from behind the arc, out-rebounded NYU by nine, had 23 second chance points and had an abundance of points in the paint with 46. 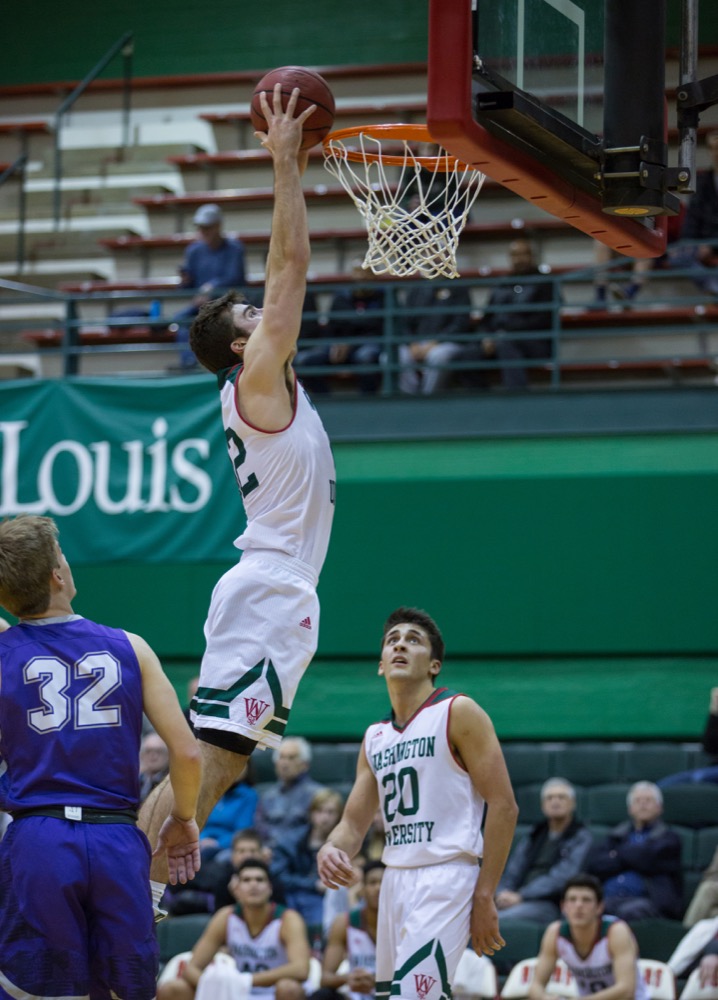 Improving to 9-6 on the season, the Bears looked to add on to their win total against their second opponent of the weekend, the Brandeis Judges, early Sunday morning. Going into the game, Brandeis University had a record of 10-5 and had won three out of four conference games.

After the initial tipoff, Wash. U. wasted no time jumping out to 7-0 lead in the first couple minutes of the game. They kept a respectable amount of distance from the Brandeis team for a majority of the first half, leading by nine with a little over eight minutes to go in the half. However, Brandeis was determined to stay in the game. They managed to crawl up the scoreboard until they tied the game at 22 with a minute and a half to go. Their lockdown defense made it hard for Wash. U. to get any good looks on their possessions, while their offense continued to produce, giving Brandeis a five point lead going into the half.

Coming out of the locker room, the Judges looked to continue their deadly combination of defense and offense, increasing their lead to double figures in the first couple of minutes. Wash. U. fought back to take the lead with a score of 43-42 with seven and a half to go. From that point on, it was a intense game that went back and forth.

Late in the game, Nolan sunk two free throws after an intentional foul to give the Bears a three-point lead. The Judges had 18 seconds to create a chance to tie and potentially force overtime, but the last-second three point heave from senior guard Corey Sherman didn’t find its way to the bottom of the net. The final score was 53-50 with Wash. U. taking its second victory of the weekend.

Hunter once again added a double-double with a game high of 17 points and 10 rebounds. Nolan added 14 points to his stat line. Overall, Wash. U. shot 39.2 percent from the field, 30.8 percent from three point range, outrebounded Brandeis by 11, scored 11 second chance points and had 24 points from the paint.

At 10-6 overall and 3-2 in conference play, the Bears will look to continue their success against Carnegie-Mellon next Friday, Jan. 25 at 8 p.m.