The Bears were nearly flawless in 2018. But the postseason is a cruel game of musical chairs. For months, Wash. U.’s bid seemed like an invitation to its own inevitable coronation. Instead, the Bears are left not with a throne but outside the ballroom entirely, to the bitter aftertaste of a single blemish: 21-1.

The Washington University women’s soccer team gathers around head coach Jim Conlon at midfield after falling to Middlebury University 1-0 in the semifinals of the NCAA Division III Tournament in Greensboro, N.C. Friday. The Bears’ ended their 2018 season with a nearly perfect 21-1 record.

In the end, Wash. U.’s most perfect team was left with the biting reality of sports: That one imperfection, one moment out of the driver’s seat, one equalizer that never came—one loss—is all it takes. The Bears’ season is over, stunned into silence by No. 3 Middlebury College, 1-0, in Friday’s NCAA Division III semifinal at UNCG Stadium in Greensboro, N.C.

For the first time, there was desperation in the Bears’ souls. Every team will say it faced adversity, but the Bears hadn’t stared directly into the clock of a ticking time bomb. When Middlebury’s Simone Ameer guided the ball into the net 153 seconds into the second half, she forced Wash. U. into a new position: Deliver a miracle or go home.

The goal was the result of a rare defensive mistake. All season, back Hannah Menard said, the Wash. U. line has been in sync.

“When one person steps, two people drop,” Menard said. “We have a saying: total body sacrifice. We’re constantly ready to throw our body in front of the ball.”

An unfavorable bounce—on grass, no less, where the Bears had not played all season—though, can sabotage the most sound of fundamentals. The Panthers pushed the ball up the field, into a throng of Red and Green defenders. Three Bears in the area to one Panther, Wash. U. could have easily cleared it out of the danger zone. Instead, Menard chose to head the ball out, not nearly far enough to diffuse the chance. Three-on-one became two-on-two, and the 50-50 shot went Middlebury’s way.

It was one of just three Panther shots, and the only real scoring opportunity. Wash. U., by comparison, took 11. But the rarity of the allowance, just Wash. U.’s sixth this year, was irrelevant. The playoffs, of course, revolve around the present.

Ariana Miles takes a shot in the NCAA semifinal against Middlebury. The Panthers ended the Bears’ national title run.

Over the next 40-odd minutes, Wash. U. traversed the stages of desperation. First, denial: OK, but one of the 16 players to score this season will find the net, then we’ll escape overtime. Next, disarray: Out of its element, the Bears uncharacteristically flew the ball up the field, to no one in particular. Finally, focus: The final 20 minutes featured the nation’s No. 1 team—controlled aggressiveness, consistent opportunities, collective effort.

But never the score. For the first time this season, one never came. Instead, a flurry of almost—a corner kick out of bounds off the net, a fancy back-heel attempt by Taylor Cohen, a 35-yard missile by Maggie Crist.

“You saw some brilliance out of our women at times,” head coach Jim Conlon said. “We just couldn’t put that final piece together in front of the net.”

“Their defense was very sound,” forward Darcy Cunningham added. “They knew when to step; whenever we had passed it backwards, they stepped right away, which shrinks the field and it makes it more compact and really difficult to pass around.”

The closest chance may have come with less than 15 minutes remaining, when Jessica Kovach was pushed in the box by Middlebury’s goalkeeper. The referees controversially made no call, ostensibly because the goalie was making a play toward the ball—but after the collision, she recanted to net.

“There were bodies flying all over the field,” Conlon said. “It’s hard to say what force propelled them to that [no-call]. I don’t think the referees dictated the game by any means. The players were allowed to score goals and have opportunities to score goals; so, I thought it was a good, hard-fought match, and the referees did a nice job of facilitating it.” 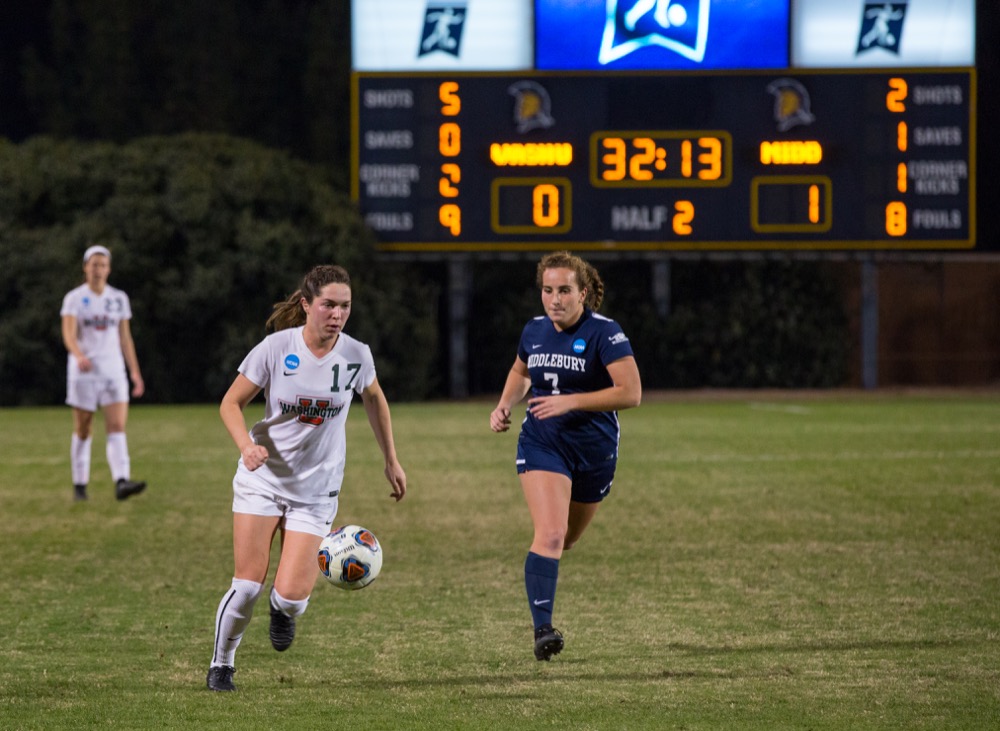 Darcy Cunningham carries the ball against a Middlebury defender in the NCAA semifinal Nov. 30. After a 21-0 season, the Bears lost 1-0 to the No. 3 Panthers and were eliminated.

The hundred or so fans who made the journey, Director of Athletics Anthony Azama among them, tried desperately to inject their own energy, pangs of anguish in their voices. Shock lingered well after the close, as the trip was supposed to include a Sunday departure.

If you are to believe in signs, the closing moments were the surest of the Bears’ mortality. Kovach took a knee to the hip, departing her final game in the most painful fashion. Crist, emotions running high, drew the team’s first yellow card all year.

When it became official, the Bears, all of them, broke into tears as their perfect season washed away. And when asked about the senior class—the winningest in Wash. U. history, earning four tournament spots, including this Final Four showing, a championship appearance and the 2016 title—Conlon and seniors Cunningham and Menard could not keep a dry eye. Ultimately, that is the lesson to be learned from this weekend: These women are not perfect. They are human.

“The wins, the UAA titles, the Final Fours, the numbers—it does not compare to the growth of these women and the friendships that I have been able to truly make by getting to know them off of the field,” Conlon said. “You get in this to hope that the ball will help them understand their powers individually and collectively to be the women they are capable of, and I am ecstatic about the results.

“They were the reason you coach. It’s that simple.”