This weekend, the Washington University women’s soccer team advanced to the Final Four after wins against No. 23 University of Wisconsin-La Crosse and No. 15 Wheaton College. In an action-packed weekend of soccer, the Bears withstood tough performances from both opponents to advance to their fifth Final Four appearance in school history. 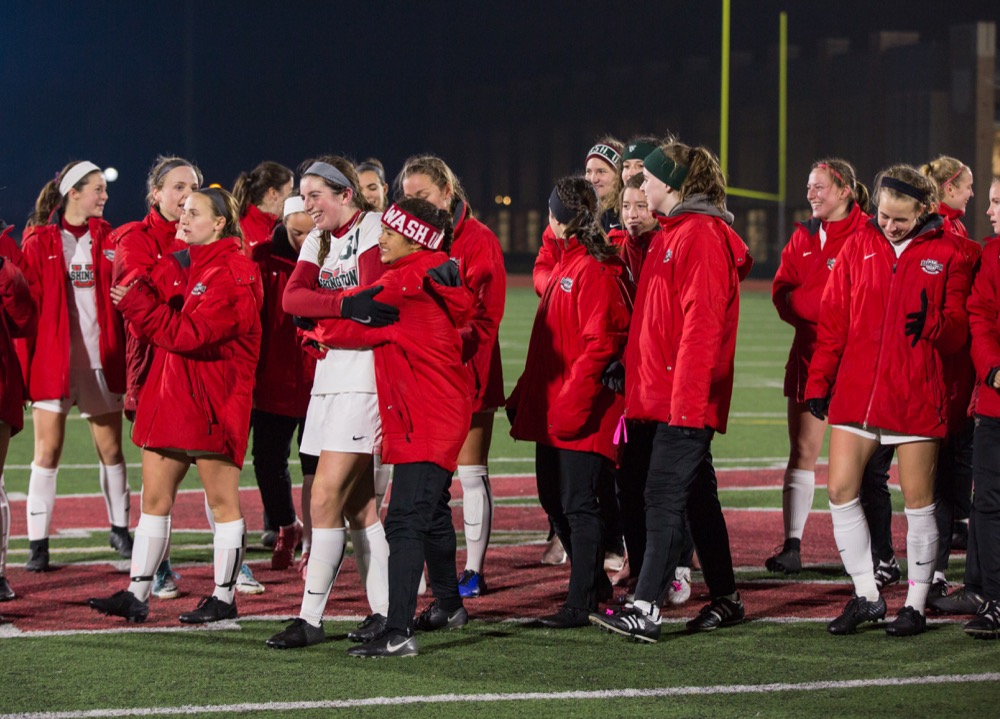 Caroline Dempsey and Ariana Miles embrace to celebrate the Bears’ win Saturday. Wash. U. will advance to the Final Four in the NCAA Tournament.

The Bears’ weekend began Friday against UW-La Crosse side, who had gone 19 matches without a loss heading into the matchup. The match began with the Bears imposing their offensive will on the opposition as the Red and Green put the, in the words of head coach Jim Conlon, “very organized” La Crosse defense under pressure early on. For the first 20 minutes, the La Crosse defense kept the Bears at bay, doing whatever they could to keep the potent Wash. U. offense from opening the scoring.

However, the Bears were able to break the resistance in the 23rd minute, as junior Taylor Cohen grabbed her 15th goal of the season. Senior Maggie Crist sent in a beautiful pass from the left side into Cohen, who kept her composure and slotted the ball away to give the Bears a 1-0 lead. The first half would end with the Bears retaining their 1-0 lead, as they headed into the second half of play looking to put the game to bed.

The second half began with the Bears continuing to attack. As the La Crosse defense began to tire, the Bears began to find more opportunities in dangerous areas. La Crosse struggled to find an answer to the Wash. U. offense. In the 68th minute, the Bears finally doubled their lead, as Taylor Cohen provided the assist to senior Jessica Ridderhoff, who placed the ball in the far corner of the net. Then, six minutes later, the Bears rounded out the scoring with a third, sealing the victory. Crist, who had made impactful plays all over the field, was rewarded with a goal of her own. After performing a give-and-go with Ridderhoff, Crist slotted the ball into the far corner, putting the game out of reach. The 3-0 victory was also a bit of revenge for the Bears, who were knocked out of last season’s NCAA tournament in the third round by La Crosse.

After a dominating performance on Friday, Wash. U. moved on to the Elite Eight, where they met Wheaton. Heading into the game, the Bears knew defeating Wheaton would be a difficult task. The night before, Wheaton had defeated Centre College, the only undefeated team in Division III women’s soccer besides the Bears. Wash. U. was determined to prevent Wheaton from defeating two undefeated teams in two days. However, Wheaton was prepared to battle, as the match began with Wheaton putting pressure on the Bears’ defense. A shot off of a corner from Wheaton’s Isabelle Oliver forced a good save from Bears goalkeeper, sophomore Emma Greenfield, who had recorded her 16th clean sheet the night before. The first half was very evenly matched, as both teams attacked and defended well. However, the Bears grabbed the all-important first goal in the 35th minute. Junior Taylor Cohen slid a pass through to freshman Jessica Shapiro. Wheaton’s goalkeeper managed to get a hand on the shot, but it wasn’t enough as it still rolled into the back of the net. Wash. U. began to take control of the match heading into the second half, as they allowed just three shots in the first half and two in the second. 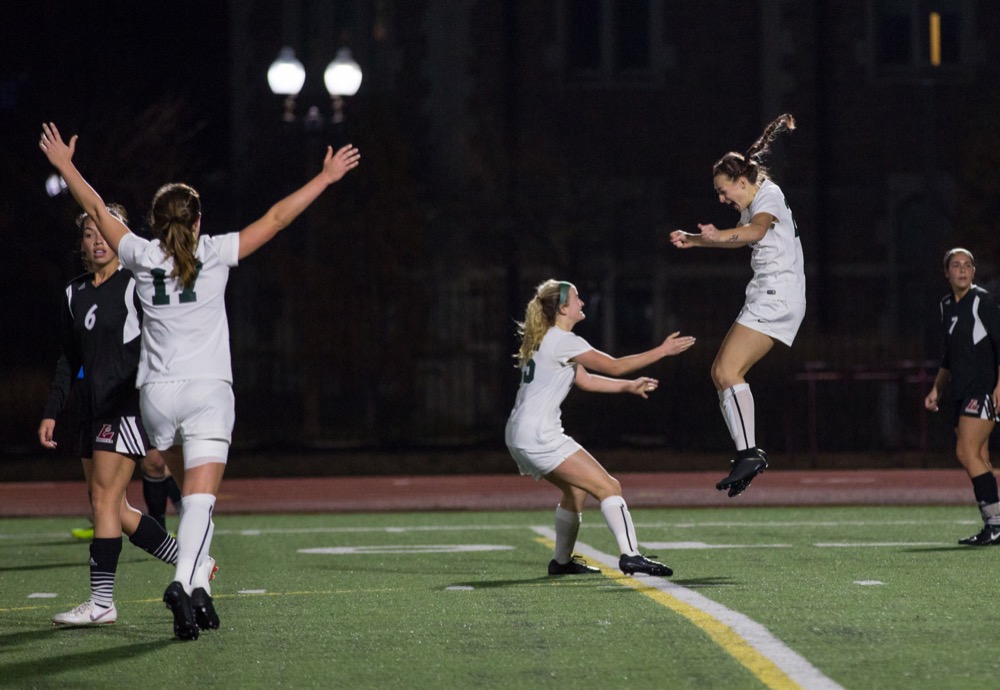 Senior forward Jessica Ridderhoff celebrates with her teammates after scoring a goal against University of Wisconsin-La Crosse, bringing the Bears’ lead to 2-0 to help them secure the win.

The second half began with Wash. U. continuing to attack, determined to put the game away. However, the offense struggled to get shots off for a good part of the half. Taylor Cohen had an opportunity to double the Bears’ lead in the 70th minute, but her shot went high. The Bears would soon regret their missed opportunities, as in the 83rd minute, Wheaton took advantage of an opportunity against the run of play and scored. Isabelle Oliver fired a shot off of the post and into the back of the net for her 10th goal of the season, tying the game up 1-1. The Bears nearly retook the lead immediately, as a shot from Maggie Crist cannoned back off the crossbar. Then, in the 87th minute, the referee called a handball in the box on the Wheaton defense, giving the Bears a golden opportunity to win the game.

Up stepped senior Caroline Dempsey, who confidently put her penalty kick away to give the Bears a dramatic 2-1 win on Francis Field. In an exciting weekend of soccer, the Bears gutted out two crucial wins in their quest for a national title, as they will advance to play No. 3 Middlebury Nov. 30 in North Carolina.