When it was done but not written, Aly Wayne screamed.

And now, a first-place finish, when she became a champion. The women defeated two-time defending champion Johns Hopkins by a single point to capture the second NCAA championship in program history. Junior Paige Lawler, graduate student Wayne, junior Sophie Watterson, senior Lisa Gorham and senior Molly Shepherd composed the group that brought the title back to Wash. U.

Senior Lisa Gorham reacts to the news that the Washington University women’s cross-country team won the NCAA Division III National Championship. Gorham was one of four Bears with all-American finishes, placing 29th with 21:49.6.

“I thought it was possible, but when you don’t compete against them, it’s hard to really know how good they are,” head coach Jeff Stiles said. “If you run that race 10 times, we definitely don’t win it 10 times. But we won it when it mattered.

There was a lull between completion and result. During the wait, the Bears were so happy they forgot about the result.

“I got so distracted by racing and getting swarmed by everyone who came out afterwards that I completely forgot about the team score until someone came over and said unofficially that we had won,” Lawler, who won the school’s 30th individual title across all sports, said.

And when the result came, the Red and Green were trapped between euphoria and disbelief.

“We knew we could do it but it’s still this thing that hits you and it’s so much,” Shepherd said.

Shock lingers because the Bears truly had to best the best to claim that throne. It was the Blue Jays they had to outfly––the country’s No. 1 team, which had squashed Wash. U.’s dream two years ago, then won it all again last year. But long-distance running is as mental as it is running form and breathing techniques. 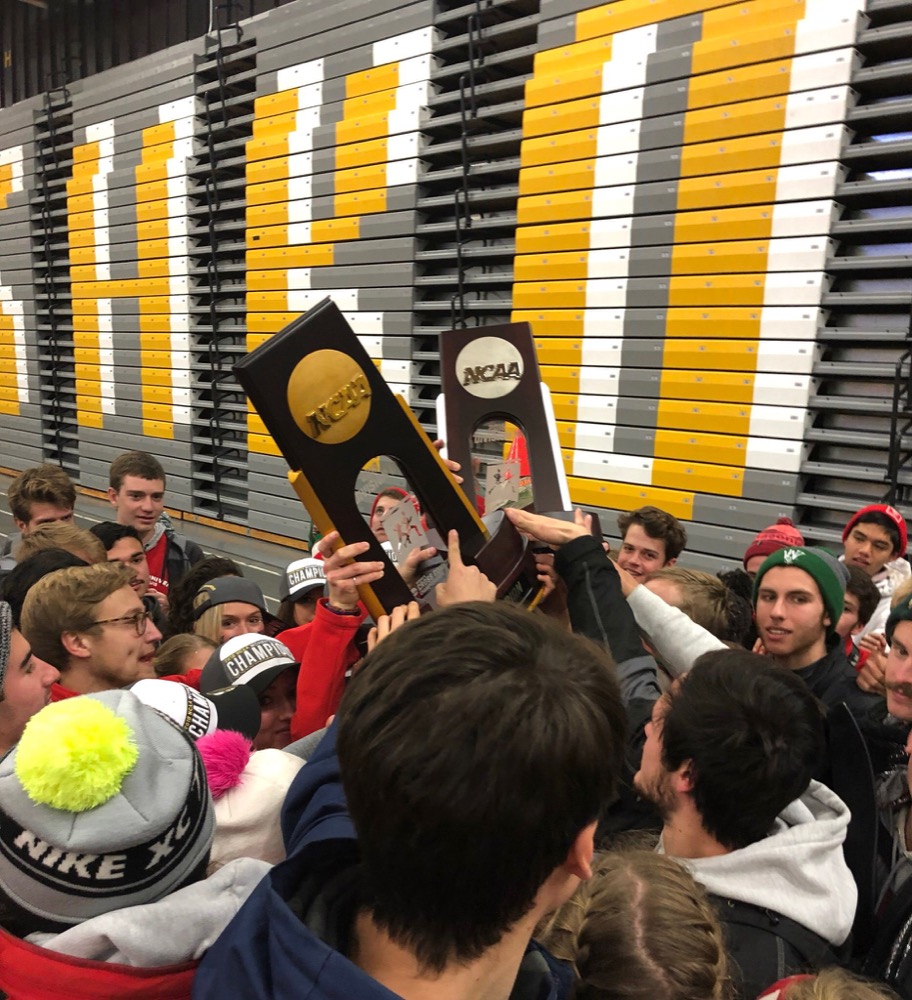 The cross-country teams celebrate after the women’s team won and the men took second at the NCAA National Championship Saturday.

“The key is actually not thinking about that going in,” Gorham said. “If you get too caught up in numbers, then you can really get in your head and it won’t usually go well.”

Still, points, not thoughts, are tallied. When push came to shove, Gorham knew she had to get those points, one way or another.

“Coming down the stretch, I could just see the Johns Hopkins girls near me and just knowing that I needed to give everything I got because those people are right there and these are points, it definitely fueled the fire.”

“They wanted it more” is a hackneyed, often unfounded sports cliche. But this time, maybe these women really did want it more.

They are champions because Shepherd ran her heart out. She pulsated from 151st at the 2,320-meter marker to 79th at the finish line to deliver the title in her final race. If she had matched her personal-best time, the Bears would have lost by 20 points. So she ran faster. If she had run 16.7 seconds faster than her career-best, the Bears would not be champions. So she ran 17.7 seconds faster.

They are champions because Watterson ran her heart out. She palpitated from 43rd to 13th to become an All-American for the first time. If she had run a second slower, the Bears would not be national champions.

They are champions because Wayne ran her heart out. She thumped from 18th to seventh for her best national finish in her final race.

They are champions because Lawler ran her heart out. She beat the 278 behind her by 3.7 seconds. By now, you know that 3.7 seconds are a lifetime in Winneconne, Wis.

They are champions because Stiles coached his heart out. His heart bled as he lost his father unexpectedly in March. On this 26 degree day, he was a little warmer.

And they are champions because their hearts pounded for each other, for the other 60 members of both cross-country teams and for the dozens more that supported them. They all speak of running with love, for something bigger than themselves.

The men’s and women’s cross-country teams celebrate after the women’s team won the program’s second national title and the men finished second, their best ever NCAA result.

They gather the night before every race, women only, and share all there is to share: their emotions, their goals, their passion. This team will surely never forget Friday night’s meeting.

“It was a moment of clicking and everyone really opening up and knowing we were in this together,” Wayne said. “No matter what would happen the next day.”

“You use that energy to propel you forward and just pass as many people as you can and especially when the race gets hard, that can be hard to do. Being so close to your teammates can really help give you something more to run for.”

And they will stick, because now, they are written in stone.