After loss to Texas-Dallas, women’s basketball bounces back against Blackburn

The No. 18-ranked Washington University women’s basketball team started out their regular season this past weekend. Hosting the 18th annual McWilliams Classic tournament, they faced off against No. 22 University of Texas at Dallas. Two ranked teams facing head to head to start off a season was always going to give a good show for those watching, it was just a question of who would come out on top. 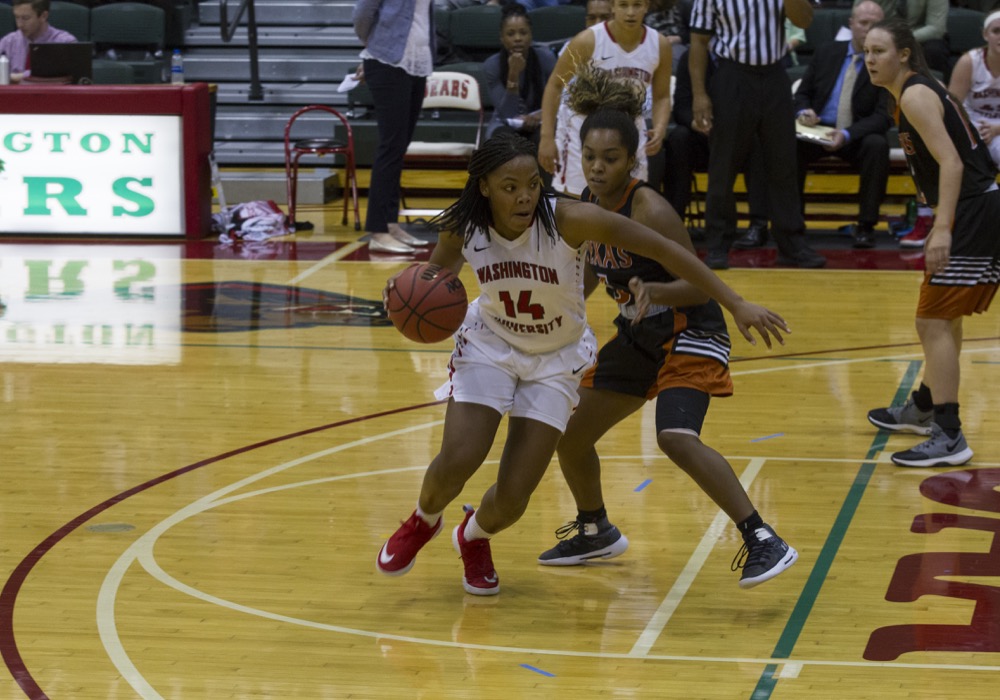 Freshman guard Samantha Weaver drives past a University of Texas at Dallas defender in the Bears’ season opener in the McWilliams Classic Friday night. Wash. U. lost 86-77 but recovered with a 101-43 victory over Blackburn College Saturday.

After leading for roughly the first three quarters of the game, Wash. U. entered the fourth quarter with a six point lead, hoping to close it out against a very talented Texas-Dallas team. After a couple of minutes of back and forth scoring, Texas-Dallas managed to tie the game at 56 points apiece with a three pointer from senior guard Amber Terry. After several defensive stops, Wash. U. senior guard Rachael Sondag sunk a mid-range jumper to put the Bears up by two points.

Texas-Dallas would not give up easily, however. After a failed three point attempt and subsequent defensive stop, they managed to take the lead for the first time since the first quarter with a three point shot from sophomore guard Kelly Skinner, putting the game at 58-59. Terry made another three pointer to put Texas up by six points with just over five minutes left in the game. Wash. U. stayed in the game for as long as they could, aided by a strong and clutch performance by senior forward Madeline Homoly. They even brought the score as close as two points at 68-70. Texas took charge and scored eight unanswered to make the score 78-68. The audience watched as the scoreboard reached a final score of 86-77. Wash. U played a well-fought game, as they outrebounded Texas by nine and had more second chance points and fastbreak points, but the team simply lost some of their traction in the fourth quarter, leading to their first loss of the season.

Homoly led the Bears Friday with a game high of 22 points, while adding five rebounds to her box score. Also in double digits were Sondag and senior guard/forward Caroline Ballard with 13 and 14 points, respectively. Freshman guard/forward Samantha Weaver made a good first impression by leading the reserves with a total of nine points and second for rebounds with five by the game’s conclusion. Overall, the team had an impressive 70.8 free throw percentage, compared to Texas’ 50 percent conversion rate from the line.

Despite the loss to open up the season, the Bears had the chance to immediately come back the next day, with the third-place match against Blackburn College.

The first quarter of the second game made it look as if it was just going to be another well-contested battle, as Wash. U. and Blackburn traded blows pretty evenly, leading to a slight 15-14 for Wash. U. by the end of the first ten minutes of the game. Beginning the second quarter, Wash. U. gained full control of the game, as some excellent ball distribution and solid defense lead to a significant 17 point lead by the half.

Coming out of the locker room, Wash. U. was ready to pile on more points. After Blackburn managed to get within 14 points early in the third, Wash. U. went on a scortching 20-0 run that lasted just over six minutes, increasing the score to an insurmountable 34 points. Overall, Blackburn only managed to get a total of six points in the quarter, down from their second quarter total of nine points.

Entering the fourth and final quarter, Wash. U. was pretty much cruise control. Adding a total of 32 points in the final quarter, the game was over long before the timer hit zero. Managing to break the century mark on an and-one layup conversion by sophomore forward Melissa Claver, Wash. U. and the fans watching happily watched the scoreboard hit a final score of Wash. U. 101, Blackburn 43.

Homoly scored a game-high 22 points and also managed to get a double-double with a game-high 11 rebounds. Also in double figure scoring was Ballard and sophomore guard Bella Moreno with 10 and 12, respectively. Trailing in total rebounds was starter senior forward Stephanie Botkin with six, followed by junior forward Kristina Schmelter and sophomore center Mary Bryggman with six and five, respectively.

Overall, it was a weekend of ups and downs for the team starting out their second season under head coach Randi Henderson. The Bears will attempt to follow the dominant win as they play their first road game at Rose-Hulman University this upcoming Saturday at 1 p.m.