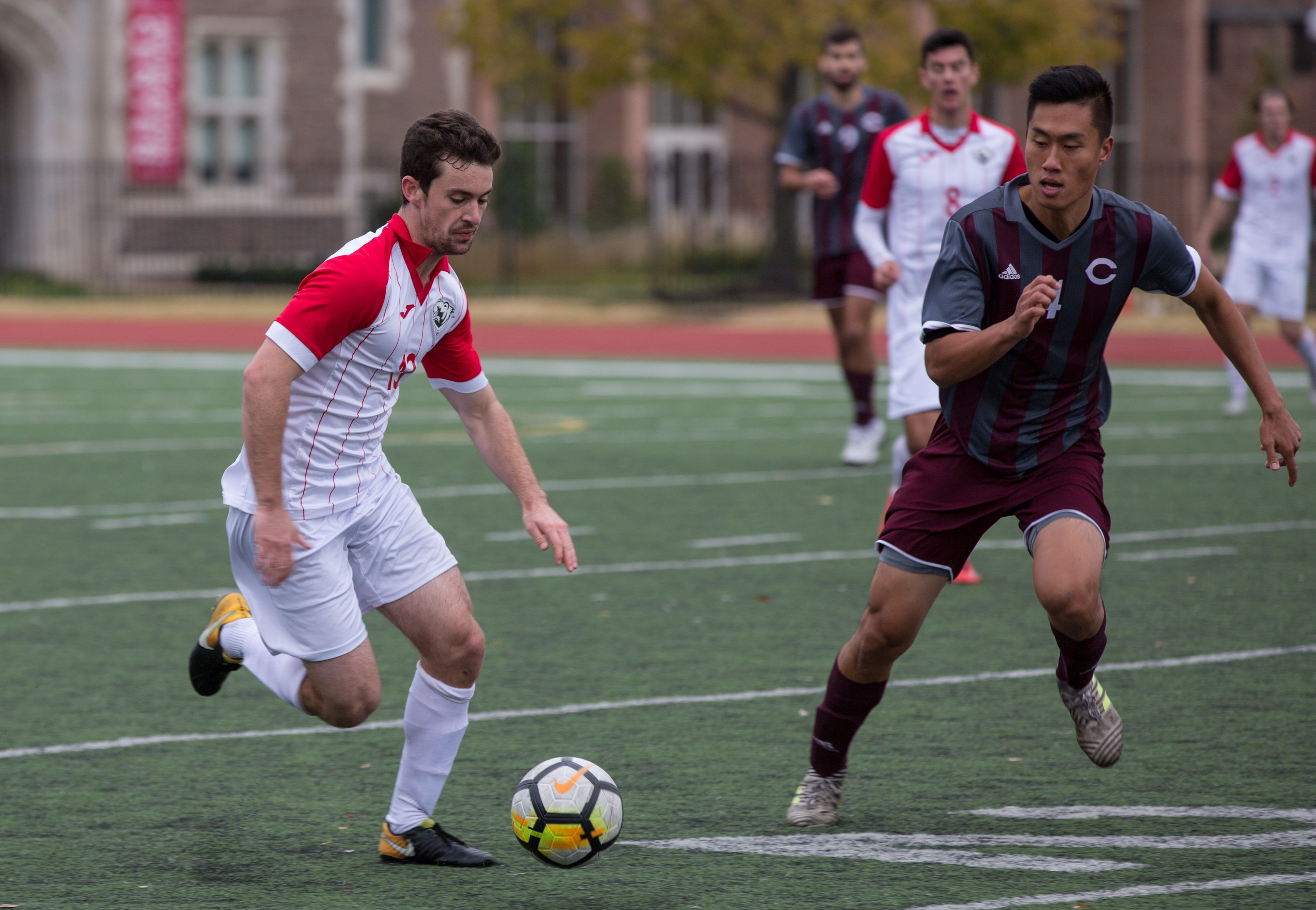 Senior Ben Strozewski runs down the right side of the field to cross the ball to Ryan Sproule, who went on to score. Strozewski ultimately assisted the only goal from Wash. U. during the game against No. 4-ranked University of Chicago Saturday, Nov. 3.

The Bears suffered their first defeat on home turf to No. 4 University of Chicago Saturday at Francis Olympic Stadium, falling to 7-7-2, where their record will remain. While they demonstrated determination and dynamic spirit to rescue the result, it simply was too late to stop the damage dealt by their rivals.

The first half began with the Bears quickly taking possession of the ball, but as time progressed, Chicago adapted to the game––to the point where they pushed the home team to the backlines and experimented with several set pieces to try and open the scoreboard. Luckily for the Wash. U. defense, junior goalkeeper Connor Mathes intervened before the ball could enter the net.

Later on, after a solid twenty minutes of Chicago controlling the game, the Bears slowly tried to assert their dominance on the field but never quite reached the other side as effectively as Chicago. The first half ended, but Chicago had established their threat to Wash. U. as they outshot the home team, 7-3.

In the second half the pressure took a toll on the Bears. In the 49th minute, just as the Bears were growing more comfortable with the ball, Chicago dealt a blow as they scored the opening goal. A surprise counter from the rivals caught the Red and Green off guard as an opposing long cross made its way into the area. The powerful header that followed afterward was just too much for Mathes, as his hand was not enough to stop the ball from going into the net.

Following the goal, Wash. U. tried to get back into the game. Though Chicago initially passed the ball around to kill time, they eventually found themselves falling back as the home team’s offensive prowess began to show. With that and the modifications made within Wash. U.’s starting 11, they worked their way to equalize the score.

Their efforts paid off around the 64th minute when senior Ben Strozewski fired a long cross to senior forward Ryan Sproule, who then placed an excellent header that soared into the net. It seemed that things were turning around for the home team, who had leveled the score with enough time left to try to find the winner.

Around the 74th minute, Chicago earned a free kick just outside the box. While the Bears positioned themselves to divert the ball, it was simply not enough: The free kick flew above the defense and went into the top left corner of the net. Mathes guessed where the shot went, but was unable to reach to the ball on time. The 2-1 result was not what the Bears hoped for, but they still had time to force another tie.

However, less than three minutes later, around the 78th minute, the Bears lost the ball close to midfield after a choppy pass allowed one of the Chicago men to steal the ball. The Bears were caught off guard and Chicago’s Kyle Ruark managed to sneak in on goal and finish one-on-one against Mathes.

From there, it was only 10 minutes until the end of regulation. The Bears had a few close chances, but could not capitalize. The rivals tried to retain possession of the ball, but as time progressed, they found themselves falling back into their area. The Bears gave a final push and attempted to work a miracle, having the cheers from those standing on the sidelines and the fans from the bleachers. Unfortunately, time ran out on them and concluded with the first loss at home this season.

That also meant that the Wash. U. season has likely reached its conclusion as Chicago won the conference and will move onto the national tournament. The Bears were visibly upset and frustrated, but they still went to congratulate the opposing team before consoling one another.

“They were many parts in the game where we were the better team, and there were many parts where Chicago played better,” head coach Joe Clarke said. “But the game flowed and I thought we did a good job.”

Of course, this was not the first time this season the Bears could not turn a good performance into a good result.

“We lost some games early on,” Clarke said. “We were clearly the better team and we’d be in the tournament right now had it not been for a number of results…Clearly if anyone were to watch the game and not know the score, they would’ve thought for sure that Wash. U. won the game. It was like that for four or five games and we’ll be regretting that.”

Even though Wash. U. winning the conference and advancing to the postseason would have been the ideal outcome, this season can’t be called a failure, according to Clarke.

“I think the highlight of this season is this team gave in and gave out, worked so hard,” Clarke said. “They created chances to score, it was dangerous and it was hard to play defensively against them. That’s all you can ask for.”

Next season for the Bears will raise some visible concerns as many seniors on the team will graduate, including Sproule and Strozewski. However, with a pool of talented players on the bench ready to be part of the starting lineup, a new generation will step up and take the mantle. The goal for that new generation will be to capture a UAA title and NCAA tournament berth, which they watched Chicago celebrate on their turf Saturday.