This weekend, the regular seasons for Washington University’s soccer teams will end in the traditional way—with a doubleheader against the University of Chicago. Though the two teams will be wearing the same colors in both games Saturday afternoon, the stakes will be very different, with the women looking to wrap up the No. 1 overall seed in the NCAA tournament and the men fighting for their playoff lives.

As the pivotal regular season finale approaches between the Bears and Maroons, here’s what to watch for during the doubleheader. 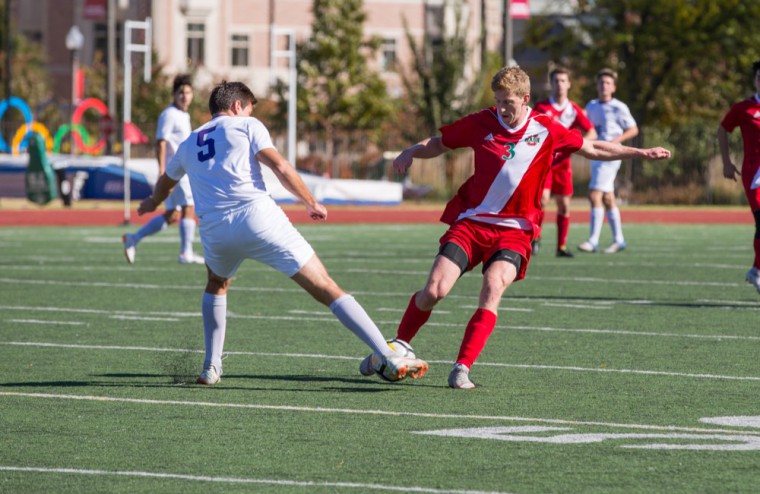 Ryan Sproule competes with New York University defense to move the ball towards the goal. Wash. U. will play University of Chicago Saturday to try to secure their position in the playoffs.

The 2018 Wash. U. men’s soccer team has had the definition of a rollercoaster season. They opened with four straight losses, reeled off five straight wins and have bounced between wins and losses ever since.

The Bears enter their matchup with No. 4 Chicago with a 7-6-2 overall record, which puts them on the outside looking in on the NCAA tournament. But a 3-1-2 record in the UAA and two wins and a draw against teams against then-ranked teams mean that a positive result against Chicago could give them a solid chance at the postseason.

One thing in the Bears’ favor is the location. The Bears have yet to lose at Francis Field this year, with a 5-0-1 record. The biggest factor for Wash. U.’s home success has been defensive consistency: They have only conceded five goals in six home games, and 16 in the same number of games away from home.

That defense will be tested against the Maroons, who have racked up 39 goals this season. The main threats will be the striking partnership of Matthew Kohl and Max Lopez, who have bagged 13 and 12 goals this year, respectively. If the Bears defense can keep that tandem in check and limit the shots that senior goalkeeper Connor Mathes has to deal with, they will have a chance to fight out a result.

The Bears will also have to produce on the other end, and that will largely fall at the feet of senior Kyle Perez, the team’s most important ball-mover in midfield, and the Sproule brothers, senior Ryan and sophomore Will, up top. The two Sproules lead the team in goals this year, and generally, when one or both of them find the net for the Bears, things go well for them.

Facing the No. 4 team in the nation, the Bears will need to play more or less a perfect game to make it into the playoffs. If they hit the highs of their mid season performances, their rollercoaster 2018 will continue. If not, the team will miss the postseason for the second straight year.

If the women’s soccer 2018 season has been a rollercoaster, it has been a very bad rollercoaster, simply going up the entire time. The Bears entered the season ranked No. 10, quickly climbed to No. 1 and, in the process, have won all 16 games, scoring 47 goals and only conceding four. Last year, Wash. U. had to beat Chicago in the last game of the season to earn a share of the UAA title; this year, they wrapped it up with a game to spare.

For the women’s team, an end of the season matchup with No. 20 Chicago is more of a tune-up, a chance to get into rhythm before the playoffs officially begin. Though the Maroons fell out of the top 10 after a pair of losses to Brandeis and NYU, they have still been a dominant team throughout the season. The Maroons have amassed a 13-3-1 record and a goal total of 49, which surpasses even the Bears’ offensive production.

Wash. U. and Chicago feature remarkably similar offensive balance, with the burden of scoring shouldered more by the system by the individual players. The leading scorers for both teams—senior Taylor Cohen for Wash. U. and Jenna McKinney for Chicago—have only amassed 10 goals; so, both teams have gotten to those huge goal totals mostly through a rotating cast of goal scorers.

The key for the game will likely be on the defensive end. Both teams have been fairly efficient in front of goal on the year, with Wash. U. scoring on 11 percent of shots and Chicago on 13.2 percent. Limiting the opponent’s scoring opportunities will be the key for both teams.

Both teams will be preparing for big playoff runs and both teams are used to finding their way deep into the NCAA tournament. Though the stakes are relatively low Saturday afternoon, these teams might well expect the matchup to be a preview for a much bigger showdown later in November.