The Washington University women’s soccer team won two games against conference opponents this weekend. The first was a close contest with a thrilling ending. The latter was a victory on Senior Day that officially clinched a conference title for the Bears. 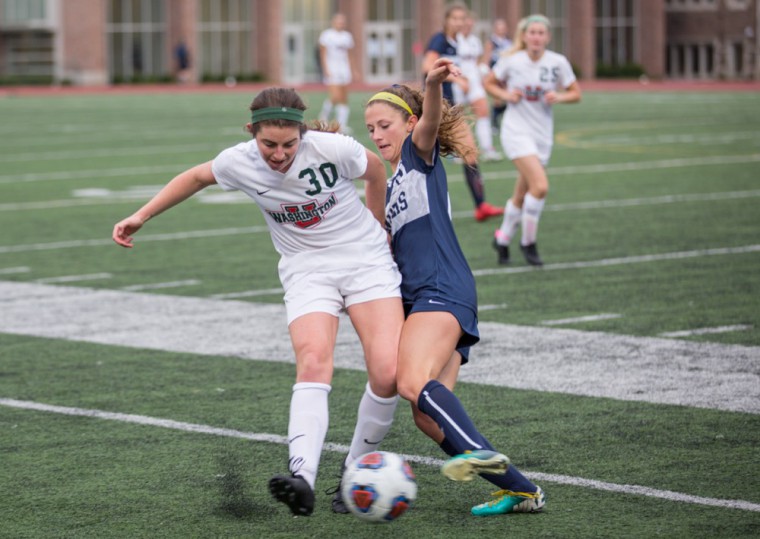 Senior Caroline Dempsey sends the ball to a Wash. U. forward for a shot on goal against Brandeis University. The Bears beat both Brandeis and New York University this weekend to win their fourth straight University Athletic Association title Sunday.

The Red and Green began their weekend Friday against No. 13 Brandeis University, who had just come off of a win against Westfield State. Both teams established an attacking presence right at the start of the match. The Bears made an effort to test Brandeis keeper, Sierra Dana, with shots coming in from senior Darcy Cunningham in the first 12 minutes of the game. Brandeis also put the Wash. U. defense under some pressure early, with early attempts from Sam Volpe and Mackenzie Smith. Cunningham came very close to opening the scoring in the 22nd minute, when her wonderfully struck shot rattled off of the crossbar. However, Brandeis came back down the field and set up their best chance of the half, as a shot from Daria Bakhtiari forced a good save from Wash. U. goalkeeper sophomore Emma Greenfield. Though Brandeis were an offensive force early on, the rest of the half belonged to the Bears.

The Red and Green continued to test the Brandeis keeper as the Bears outshot Brandeis 20-3 for the match. However, heading into the second half, the match was still scoreless. The Bears continued to plug away at the Brandeis defense, and in the 63rd minute, they once again came close to breaking through. A shot by Wash. U. junior Taylor Cohen came back off the crossbar, denying the Bears of the crucial opening goal. Heading into the final minutes of the match, it seemed like the game was destined for overtime. However, in the 90th minute, freshman Erin Flynn delivered a beautiful pass to put Cohen one-on-one with the Brandeis keeper. Then, Cohen showed great composure to finish off the chance, putting Wash. U. ahead 1-0 with less than a minute to play. In a truly thrilling finish, the Bears came up with the victory against a bitterly disappointed Brandeis team, who believed they would be the ones to knock off the undefeated Bears.

After a day of rest, the Bears faced their second matchup of the weekend against New York University. While New York had set the world on fire this season, they have proven to be tough UAA competitors, with a 4-1 record in conference play, good enough for second in the conference. A win against NYU would officially clinch a UAA conference title for the Bears.

Prior to the match, the Bears celebrated the careers of its seniors: Maggie Crist, Darcy Cunningham, Caroline Dempsey, Audrey Freeman, Jessica Kovach, Hannah Menard, Jessica Ridderhoff and Isabelle Tamburro. Determined to keep NYU from spoiling Senior Day, the Bears were in control for the majority of the game, outshooting NYU 5-1 in the first half. The second half was no different, as the Red and Green forced multiple saves out of NYU keeper Meghan Marhan. The Bears finally found the breakthrough in the 57th minute, as Flynn put in a great cross that found freshman Ariana Miles, who finished it off to put the Bears up 1-0 with just over 30 minutes to play. The Bears unleashed an offensive onslaught after the opener, and eventually they found their second goal. Dempsey was able to mark her last game at Francis Olympic Stadium with a goal, as her left-footed shot fired off the near post past Marhan, putting the Bears out of reach. Wash. U. would win the game, 2-0. The win clinched the UAA title and, by extension, cemented the Bears spot in the postseason.