The Washington University men’s soccer team played some of their most important games of the season this weekend. At 6-6-1, the Bears entered the weekend on the cusp of the playoffs, with the opportunity to put themselves further in the hunt with wins against Brandeis and New York University. The Bears defeated Brandeis, 2-0, and tied NYU, 1-1. 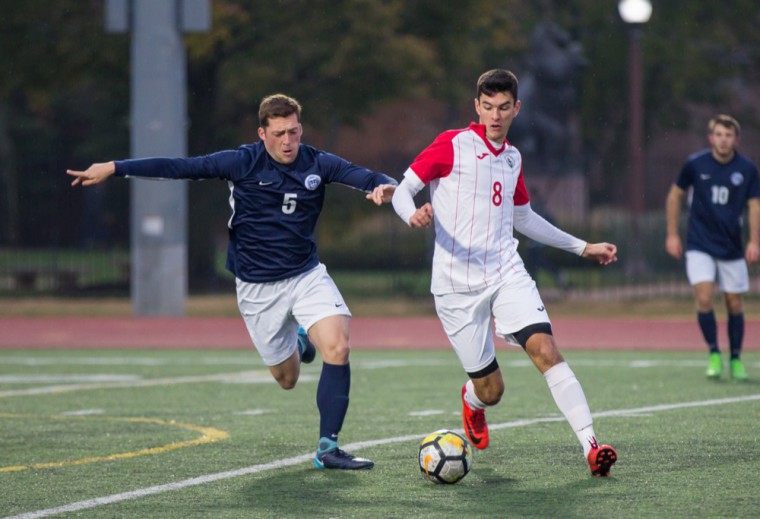 Friday afternoon at Francis Olympic Stadium, the home team bench was as hyped as always while cheering on their teammates before and during the game. From kickoff, Wash. U. succeeded in defining the game.

Around the 17th minute, junior Jack Newman placed a beautiful pass to senior Ryan Sproule. The striker then ran straight into the box and executed a pinpoint finish into the opposing team’s net. The second goal followed in 40th minute on a precise header from junior Makio Yamamoto after sophomore Sean Connors sent a long cross to Sproule, who knocked it down to set up the junior.

Even though the first half pretty much went the way the Bears wanted it to, the second half was closely contested. The Bears defense was porous, inviting Brandeis to place themselves on the scoreboard. Junior goalkeeper Connor Mathes was there to ensure that the Bears would keep a clean sheet. On top of that, Wash. U.’s offensive was rather lackluster, as they did not press forward as they had in previous matches when they won, or in the first half. Despite the regression, the Bears managed to hold onto their lead.

“They were pressing and putting players forward to get some chances in the second half. I don’t think we managed the lead well,” head coach Jim Clarke commented after the match. “I thought we took a few chances early on and lost some balls that helped [Brandeis] get a chance. When it came to ‘kill the game,’ as they say, we played conservatively.”

On Sunday, the Bears took the field again to take on NYU. Early in the match, when Sproule was pushed to the ground inside the box, and the referee granted the Bears a penalty and a golden opportunity to take the lead in the seventh minute. Senior Kyle Perez stepped up to execute the penalty, placing it perfectly into the net with the calmness of a professional. The Bears held onto the lead throughout the first half and late into the second.

However, around the the 83rd minute, the referee conceded a free kick just outside the penalty area for NYU, who spent most of the game chasing the tie. They finally caught it when they placed the ball on the ground and send it underneath Wash. U.’s defense’s feet and into the lower bottom corner. The game concluded as a draw after it moved to two scoreless sudden victory rounds.

While the Wash. U. defense and Mathes looked on point, NYU came with a clearer dynamic, as early on within the game, they outshot the home team. In addition, they were able to steal the ball and retain possession for as long as they could, even when the Bears began to produce offensive plays. The converted penalty came at the peak of the opposition’s early momentum, but NYU pressed on. The Bears, however, were not pressuring the rivaling defense to open up spaces as they found themselves falling back by a little. But there was one factor that neither side anticipated: the high-velocity winds.

“I think we adjusted to the conditions very well, although we did not move the ball as well as we normally do,” coach Clarke reminded post-match. “But it was so hard getting out against the wind, and when we were with the wind it was hard for the other team to move. The game was different than a normal soccer game with this kind of wind.”

The Bears now have one game left to punch their ticket to the postseason. That game will be a home contest against No. 5 University of Chicago. While Chicago has the advantage in record and ranking, the venue is reason for hope for the Bears. Wash. U. is now 5-0-1 in home contests at Francis Olympic Stadium. They’ll hope to extend that home dominance next Sunday.