The Washington University women’s soccer team continued its undefeated season Saturday with a 2-1 win over No. 9 Wheaton College in Wheaton, Ill.

Entering the game as the No. 1 team in Division III, the Bears knew they had a huge target on their backs. However, Wheaton also came into the game in good spirits, as it had won its last eight games. 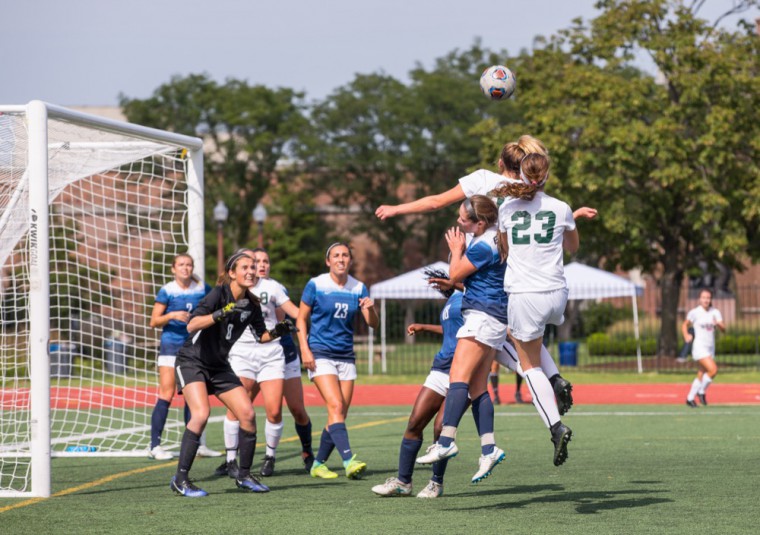 The game started out slow, as each team took a few minutes to feel each other out. The first shot of the game came from Wash. U. in the eighth minute, when senior back Hannah Menard’s strike just missed wide right. From there, the Bears began to amp up the pressure, getting themselves into good positions to score.

The positive play was eventually rewarded with a goal in the 12th minute from freshman midfielder Jess Shapiro. Fellow freshman midfielder Ariana Miles and junior forward Taylor Cohen executed a beautiful give-and-go, allowing the ball to find Shapiro at the top of the box. Then, Shapiro lifted a well-struck shot over Wheaton goalkeeper Lauren Ketchum. This marked Shapiro’s second goal of the season, making the score 1-0 Wash. U. early.

After scoring, Wash. U. continued to control the flow of the game with possession. Over the next 10 minutes, the Bears continued to put pressure on Ketchum, forcing multiple saves from the Wheaton goalie. Senior midfielder Caroline Dempsey nearly doubled the Bears’ lead in the 25th minute, when she unleashed a shot that rattled off the crossbar and into the grateful arms of Ketchum. However, in the 27th minute, Wheaton slotted away a goal against the run of play. Wheaton’s Carney Blake lifted in a well-timed pass to Isabelle Oliver, who took the ball down and placed a composed shot into the lower left corner to tie the match at a goal apiece.

Both teams continued to pressure each other for the next goal. Though Wheaton did not get away a lot of shots, the shots they did get were dangerous. In the 42nd minute, Wheaton forced an outstanding save from sophomore goalkeeper Emma Greenfield. Then, right on the stroke of halftime, Wash. U. retook the lead. A huge defensive lapse from the Wheaton defense allowed freshman midfielder Erin Flynn to put away her fifth goal of the season.

The second half continued in a similar fashion to the first. The Red and Green were determined to put away a crucial third goal. In the 54th minute, they seemed certain to get it, as senior midfielder Darcy Cunningham came very close to putting the ball away off of a corner kick. However, a great save by Ketchum forced another corner kick, from which Wheaton was able to successfully clear the ball.

Throughout the rest of the match, both teams continued to attack; however, the game would finish with the same 2-1 score in favor of Wash. U. While on paper, it may seem like Wash. U. controlled the bulk of the game, Wheaton’s efficiency in front of goal was almost enough to trip up the Bears. However, the Red and Green stayed the course, pulling out a very tough victory against a top-10 team, while also battling the elements.

The Bears have another ranked matchup on tap, as they will return home to host No. 15 Brandeis University Friday afternoon.