While Washington University students rested during Fall Break, the Red and Green sports teams kept on chugging along, completing a successful four-day weekend to enter the home stretch. Here’s a snapshot of what you may have missed while you were letting loose (or catching up on your snoozes). 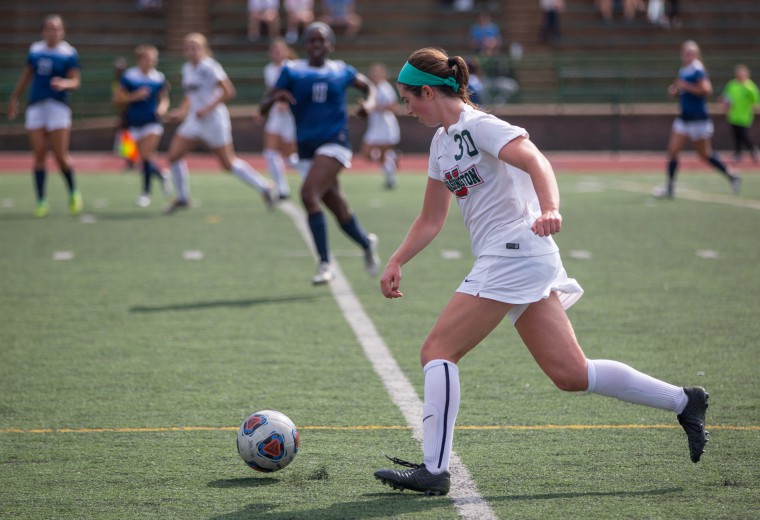 Senior Caroline Dempsey dribbles the ball toward the Emory University goal. The Bears defeated Case Western and No. 21 Carnegie Mellon University to improve to 13-0 this weekend.

A disturbing trend continued for the No. 1 women’s soccer team this weekend. The Bears surrendered their first goal after five season-opening shutouts, their second after three subsequent shutouts and, this weekend, a third after just two consecutive shutouts.

Kidding aside, Wash. U. all but held serve over the long weekend, dispatching Case Western Reserve University and No. 21 Carnegie Mellon University with relative ease, traveling to Cleveland and Pittsburgh for 2-0 and 4-1 victories, respectively.

In the Friday nightcap at Case, the Red and Green defense exerted itself from start to finish, allowing the Bears to outshoot the Spartans 21-1. Sophomore goalkeeper Emma Greenfield did not see an attempt all game.

Freshman midfielder Erin Flynn got the Bears going with her third goal in five games, while sophomore forward Kristen Reikersdorfer iced the match with her first in the 81st minute.

Sunday, the Bears weren’t nearly their dominant selves, outshooting the Tartans 10-9, both marks season-worsts. But they didn’t have to wait long to get comfortable anyway, forcing an own goal just 35 seconds into the contest. From there, Wash. U. played few high-leverage minutes, junior forward Taylor Cohen pitching in two goals and senior midfielder Maggie Crist adding another around a Carnegie score.

The Bears take on their highest-ranked team thus far in No. 9 Wheaton College Saturday.

Off a thrilling victory over No. 2 Colorado College, the volleyball team extended its winning streak to seven in the year’s second UAA Round Robin in Pittsburgh. On Saturday, Wash. U. went the distance to beat Carnegie and University of Rochester, before sweeping New York University and getting swept by No. 12 Emory University Sunday.

In the opener on CMU’s home court, Wash. U. sprinted out to a 2-0 start. A Carnegie Mellon comeback set up a decisive fifth set, but the Red and Green recovered to put the Tartans away, 15-10. Against Rochester, Wash. U. flipped the script, reversing a 2-0 deficit but closing the deal with ease in a 15-6 finale.

In the Sunday morning match vs. NYU, the Red and Green managed each set without difficulty, the Violets progressing from 14 to 20 to 21 points but never able to match Wash. U.’s output. In the final game of the weekend, Wash. U.’s streak came to a head, getting ousted in three by Emory.

The Bears get their own fall break this weekend before going to Westminster College Tuesday and hosting the Baden Invite the following weekend.

The men’s soccer team faced a crucial weekend in its hunt for a playoff spot, taking on No. 19 Case and No. 13 Carnegie Mellon after recently climbing to the No. 23 spot itself. But at 5-4-1 entering the home stretch, Wash. U. would need a late push over talented teams to force its way into the postseason conversation.

Against Case, it looked like that chance might slip away. The Red and Green allowed a goal in the 27th minute, on the only scoring attempt by the opposition in the first half.

But the equalizer never came in a low-opportunity back-and-forth. The teams combined for only four other shots on goal, Wash. U.’s three all saved down the stretch. A 1-0 final sent the Red and Green back to .500.

The situation became even more desperate Sunday, when Carnegie got off to another early lead. This time, though, the tying shot came, off the foot of senior forward Ryan Sproule in the 35th.

For the remainder of regulation—and an entire overtime period—both teams fought but failed to come up with the game-winner. In the second overtime, however, Sproule’s brother, sophomore forward Will, put back a rebound to complete the Pittsburgh siblings’ conquest of CMU.

The Bears will again have to fight to separate from .500 Sunday at University of Wisconsin-Whitewater.

The Red and Green defense, progressively improved since the week two loss, was eaten up on Wheaton’s game-opening drive. The Thunder lit up the Bears for 75 yards on just five plays, capped off by a 42-yard score 92 seconds into the game.

The Bears recovered superbly, however, not allowing another point until there were under two minutes left—in the entire game. In the meantime, the Red and Green offense went to work, doing enough to get out to a double-digit lead. Junior quarterback Johnny Davidson fired two touchdowns without a pick, while junior running back John Fisher averaged 5.1 yards per carry on the ground to balance the offense.

With the upset in the books, the Bears look for another Saturday at 6 p.m. against No. 17 Illinois Wesleyan at Francis Field. One more win, and Wash. U. should enter the top-25.