Jack Kurzu is a mountain of a man. At 6’4” and a rock solid 310 pounds, he stands out in a crowd like a titan amongst mortals. Fundamentally, he is a jovial and thoughtful person, but he oozes the kind of physical power that makes one believe he could flick them and they’d fly for miles. He is built like a Division I football player.

Kurzu is a graduate student, pursuing an M.B.A. at the Olin School of Business. He is a member of the Washington University football team, where he plays guard. In many ways, he’s a normal, high-achieving student at the Wash. U. However, the path from high school to Olin for Kurzu has taken many turns. 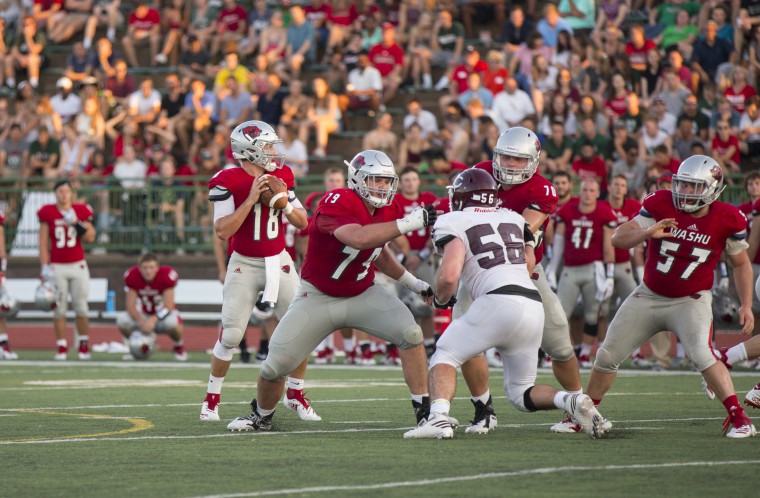 Offensive lineman Jack Kurzu blocks the Univeristy of Chicago defense line while quarterback Johnny Davidson looks for a pass. Kurzu is a graduate student playing for the Bears.

In 2013, Kurzu was one of the top football prospects in the state of Missouri. He had followed up his sophomore year, which he spent playing on the undefeated National Champion St. Thomas Aquinas Raiders in Florida, with an impressive season in Missouri playing for MICDS in Ladue. Kurzu won a plethora of awards for his stellar play in the season, and he earned a scholarship to Division I Oklahoma State University to continue his football career.

“I heard about Oklahoma State from my dad,” Kurzu said. “He actually played football with the then offensive Line Coach, Joe Wickline. I got exposed to the school and just absolutely fell in love with it. I thought, ‘This was the place I’d love to do my undergrad.’”

Kurzu redshirted in his first year at OSU. By his second year, he was second on the depth chart. The Cowboys opened the season with a close loss the Seminoles of Florida State, then ranked No. 1 in the nation, at AT&T Stadium in Dallas. In the days after the game, Kurzu began to notice a soreness in his back.

“I requested that my coaches let me rest for a practice, and they agreed to let me do the elliptical during our weight lifting session,” Kurzu said. “I went to the trainers after that. I was concerned because I had no feeling down my right leg.”

Doctors found that Kurzu had a double ruptured disk in his back that would ultimately require surgery.

“Nerve damage is a very tricky thing with recovery,” Kurzu said. “At that time, I wasn’t sure how I was going to recover or what the timeframe would be. So with a heavy heart, after a lot of thinking with family and friends, I decided that I would retire from football and just pursue academics.”

Leaving a sport midway through college is a lifestyle shift. Student-athletes orient their entire schedule around improving at their craft.

“It’s sort of like getting dropped off in the middle of Russia,” Kurzu said. “It’s not that you can’t survive it, but you’re going to have to learn new languages and different ways of doing things. It just takes a while to readapt to a different lifestyle. It’s doable, but it’s a lot of change very quickly.”

While the door closed on his football career, a litany of other doors opened for Kurzu.

“I was able to study abroad at both Cambridge University as well as in Hong Kong. I was able to get an internship in China,” Kurzu said.

Kurzu graduated from Oklahoma State with honors in 2017 and went straight into the workforce, getting a job at MidFirst Bank in the officer development program. As he worked, he came to the realization that an M.B.A. would helpful in advancing his career.

“So I started applying. And being from St. Louis, everyone knows about Wash. U. and how prestigious it is. So I applied to Wash. U.”

During the application process, a friend of Kurzu’s told him about the chance to play semi-professional football.

“I told him, ‘Wait a second, let me see if I have any eligibility with football left,’” Kurzu said.
Kurzu found out from the NCAA that he still had a year of Division III eligibility remaining. Knowing this, after he got into Wash. U., he reached out to head coach Larry Kindbom about joining the team.
“He connected me with [Deputy Director of Athletics] Chris Peacock, and we started the process and everything worked out.” Kurzu said. “It makes me think that this was meant to be.”

Kurzu sees some parallels between Wash. U. and Oklahoma State in terms of culture.

“I wanted to be in marketing, so I wanted to see how the marketing and Business school was and Oklahoma State is really good. They actually call themselves the ‘Princeton of the Prairie,’” Kurzu said. “I also wanted to see how the fans were. I had visited a couple places where the fans weren’t necessarily the nicest when the team wasn’t doing well. I wanted a fan base that would still treat you well, even if you guys were on a losing streak. They’d still be there for games. Lastly, I looked at how the team treated each other. If a team is really isolated, or something like that, it’s never fun to play with those people. You want people who aren’t cruel to each other, especially because you’re supposed to be family. Oklahoma State fit all those categories. Wash. U. also fits all those categories.”

Back on the field this spring, Kurzu looks right at home. He has barely lost a step from when he was playing Division I football. While his game itself has not changed, his appreciation of it has deepened.

“It’s amazing,” Kurzu said. “You never know whenever football is going to end. There’s an old saying at Oklahoma State that NFL stands for ‘not for long.’ You’re not going to be there that long. If you’re very good, you’ll be there. But even then, the best player might be out of there in five years. The best thing I can say is that I enjoy being back.”

Asked what he wants out of his final season, Kurzu expressed his desire to win.

“You always wanna win. No matter what,” Kurzu said. “I know that this is a great conference we’ve gotten into. I’m excited to continue to play these teams, only having played one team in the conference so far. I’m hoping that we can do well with those. I want to win, but I also want to enjoy it.”