After a five match win streak, with only one that went into a fifth set, it was safe to say that the Washington University women’s volleyball team was clicking heading into this weekend. During that span, the Bears outscored opponents 15-3, including two wins over ranked teams, No. 10 Illinois Wesleyan and No. 13 Carthage. Senior Ifeoma Ufondu fired a career high 21 kills against Illinois Wesleyan while junior Zoe Baxter posted 36 digs versus Nebraska Wesleyan as the Bears rolled to a 6-2 start. But with the East-West Challenge looming, their biggest test was still ahead.

Taking place in Claremont, Calif. this past weekend, the tournament would pit Wash. U. against three ranked teams, including the defending national champions, Claremont Mudd Scripps. The Bears kept their win streak alive to start the weekend with a dominant performance over No. 15 California Lutheran University. They steamed through the first two sets, winning 25-10 and 25-21. After dropping the third set, the team rebounded by closing out the fourth set 25-12. A season-high 11 aces, including a career-high 5 from senior Lauren Martin, helped Wash. U. command the game. 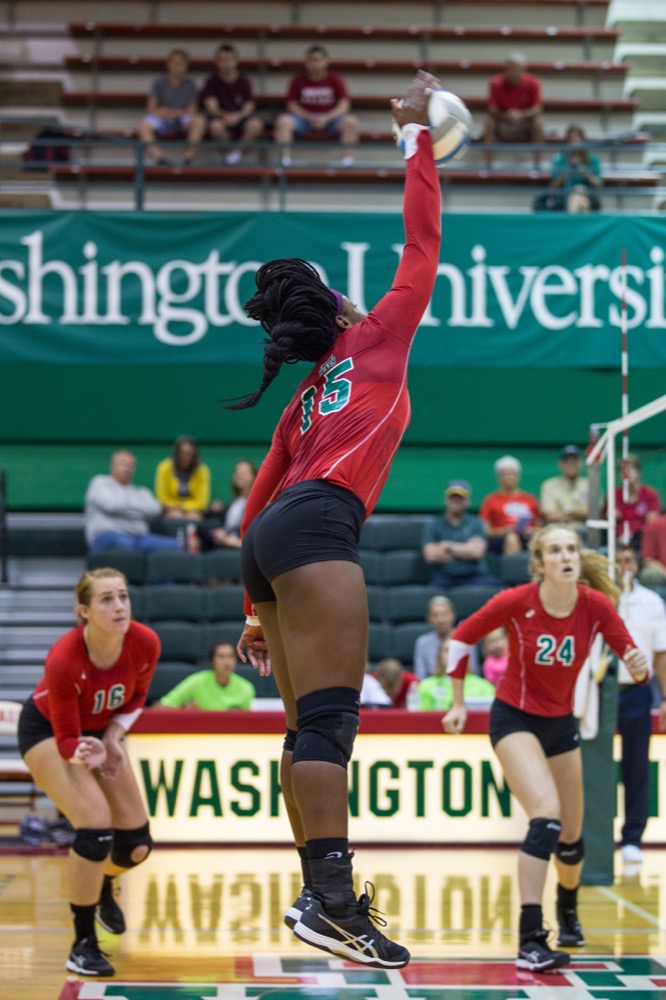 Senior Ifeoma Ufondu spikes the ball against Nebraska Wesleyan. Ufondu led the Bears in kills this weekend and led them to a victory against No. 3-ranked Claremont-Mudd-Scripps Colleges, improving Wash. U.’s overall season record to 8-3.

With the victory, the Bears took a six game win streak into their match later that day against No. 13 Juniata College. Wash. U. could not come back from a tough first set loss, 25-22, and fell during the subsequent two sets to end their win streak. According to head coach Vanessa Walby, Juniata’s “well-rounded” approach gave the Bears some struggles, but mainly, an “off match” made it tough for them to gain any traction during the loss.

“There wasn’t a team this past weekend in California that you could have an ‘off’ match against,” Walby added.

With their next game against the host, Claremont Mudd Scripps, the No. 3 ranked team and the defending national champions, the Bears had to regroup quickly. “We have a tough schedule and we can’t afford [to dwell] on the past,” Walby said.

They’ve rebounded many times during Walby’s tenure at the school. In 2016, a day after falling 3-0 to No. 22 Elmhurst, Wash. U. defeated then No. 1 Cal Lutheran. Last year, in the second game of the season, they lost to unranked Cornell College 3-1 before sweeping No. 15 Hope in the following match. Saturday, it was time to bounce back once again.

After trading the first two sets with Claremont Mudd Scripps, Wash. U. used a 10-4 run to fuel a 25-18 victory in a decisive third set. That gave them the momentum they needed, defeating CMS in the fourth set to capture the win. Ufondo and senior Julianne Malek had 20 and 10 kills each, and sophomore Kirby Knapp assisted her teammates 38 times. Malek’s seven blocks also helped Wash. U. defensively in the big victory.

It was a tale of two weekends for the Bears, but they’ll head into their Thursday night matchup with Webster University ready to start a new win streak.