The Washington University football team is back at it, training as hard as ever. The reason? Starting this season, the Bears will play in the College Conference of Illinois and Wisconsin (CCIW). The move comes after years of UAA affiliation, followed by a pair of seasons in the Southern Athletic Association (SAA) and one as an independent team.

With a fairly unfamiliar mix of teams on the docket, Wash. U. will have to prepare for a new set of opponents. Let’s take a look at the scouting report for some of these teams as the Bears look forward to the 2018 season. 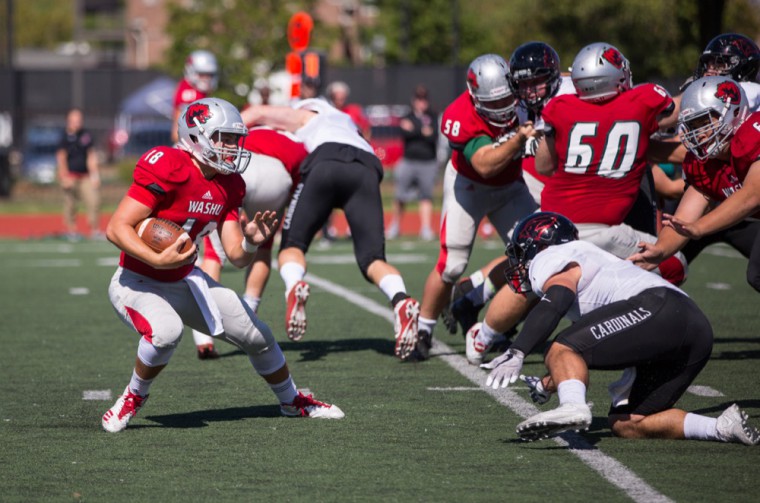 Quarterback Johnny Davidson runs the ball against the North Central College defense last season. This year the Bears will play their first season in North Central’s conference, the CCIW.

With a 7-1 record in the past season, the team from Naperville, Ill. is looking to continue its dominance in the conference. Leading the CCIW in red zone offense, red zone defense and sacks, while being tied for first in touchdowns, the Cardinals are a well-rounded squad that will be imposing on both sides of the ball. One key player to take note of is junior running back Dominick Muoghalu, who was eighth in the conference in rushing last year, which is all the more impressive considering the fact that he was in the shadow of now-graduated back Austin Breunig, who was second.

Also finishing the season with an impressive 7-1 record, North Central’s neighbor from Bloomington, Ill. is right there with the Cardinals. Ranking first in scoring defense (sixteen touchdowns allowed) and rushing defense (five touchdowns allowed via rushing), the Titans have the shutdown unit to compete with any team. Two explosive players to look out for are rising senior Morgan Alexander, one of three CCIW players to crack 1,000 yards on the ground, and Trevor Staley, who snagged three defensive interceptions.

Finishing 6-2 a year ago, the foes from Wheaton, Ill. are in a great position to dethrone the two teams that placed above them in the 2017 season. They placed first in total offense and total defense, and, like North Central, are great on both ends of the field. Given this momentum, it would not be surprising to most if they came out on top this year. A notable player to keep a close eye on is rising sophomore TJ Williams. Despite being a freshman in 2017, he finished in the top 10 in rushing—despite only 43 attempts. Williams was the only top-10 rusher in the CCIW to average double digit yards. With an even bigger workload going forward, he’ll definitely be a focus for the Wash. U. defense. 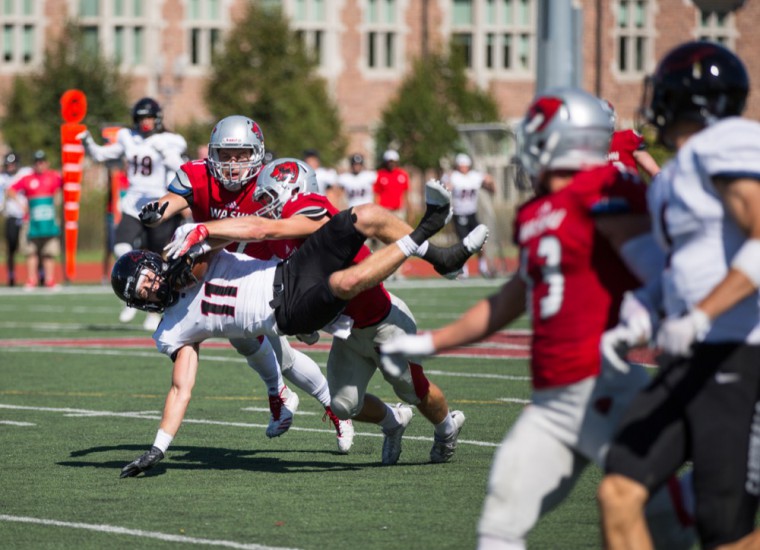 Washington University defensive backs Jack Mills and Andrew Ralph tackle a North Central runner. After one year without a conference, the Bears will play their first game in the CCIW Sep. 1.

The Bears stack up in the middle of their new conference. According to the CCIW Annual Preseason Coaches’ Poll, the Bears stand sixth among the ten teams, coming off a 3-6 record. Going forward, landing in the conference will allow Wash. U. less difficulty in forming a schedule, as well as fewer travel issues. Head coach Larry Kindbom said that while the SAA offered plenty of teams to play, the long distances for away games in places like Jackson, Miss. proved a concern for the student-athletes.

The CCIW, meanwhile, provides the best of both worlds: a conference in the region that still supplies a sufficient number of teams to compete against. In terms of the playing style itself, however, it may be a rough initial adjustment.

Regardless, the plan remains the same. As opposed to adjusting the skills and tactics utilized by the team, the team prefers to make the opposition “adjust to us” by “being the ones creating the tempo,” Kindbom said.

When it comes to the general morale of the squad, the Bears are “excited about the year, together,” Kindbom said.