Chandler Kropp making waves, but don’t expect him to bring it up

Chandler Kropp was far away from home. He was in Orange, Calif. at Chapman University, 27 hours driving and 1,814 miles from his hometown of Clayton, Mo. In November of his first semester at Chapman, he hopped onto YouTube.

Up came a video capturing someone’s two-to-three-year transition from a woman to a man.

“I watched the video and was very, very jealous,” Kropp remembered. “And I had never felt any jealousy like that before…I wanted what he had.”

That was the first time Kropp thought about the prospect of being transgender and becoming a man. It was also one of the first times Kropp ever wanted something badly.

While he grew up playing soccer and basketball, he dropped those two sports in favor of rowing at the beginning of his freshman year of high school. He quickly found success within the St. Louis rowing scene, setting his sights on the Division I and Division III levels. Still, that burning desire for success in rowing was never there. 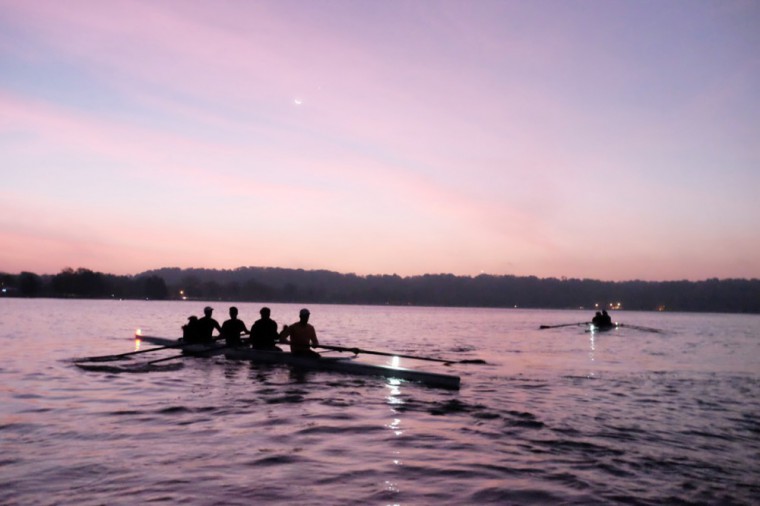 The Washington University rowing team takes to the water for a morning practice last fall. Senior Chandler Kropp, who transferred to Wash. U. to be closer to his family after he came out as transgender his freshman summer, has become a key leader on the team this year.

“I really liked rowing, but I wouldn’t say that I was extremely motivated by it,” he says.

An injury during his senior year of high school left him without those Division I offers. That led him to Chapman, with beautiful white-pillared buildings protected by classical West Coast palm trees. He rowed his first year and had good friends. Academically, it wasn’t the best fit, but Kropp wasn’t unhappy at Chapman. It took until that YouTube video in the fall of his freshman year for things to change.

It got him thinking: Maybe a transition is what I have really wanted for my entire life. The idea of being transgender was “overwhelming” and he knew that he couldn’t make that transition in California.

“It wasn’t for four or five months that I accepted it and said, ‘OK, I’m transgender, I need to come home, come back to St. Louis and figure out what comes next,’” Kropp said.

That summer he returned to St. Louis fresh off his first year of college. It would be his only year at Chapman. After realizing he was transgender, Kropp applied and was accepted to Washington University. He wanted to spend the next three years at home, just 15 minutes away from his family in Clayton.

That summer, after months and months of holding it in, Kropp also made the tough decision to tell his mother about what he had learned about his gender identity during his freshman year at Chapman. She would be the first person to learn. He told the rest of his immediate family next, creating an instant bubble of support.

However, the move to Wash. U. wasn’t easy. Kropp decided to spend his sophomore year at Wash. U. presenting and passing as a woman so that he could fully make the transition during his sophomore summer. He barely spoke in classes, took a break from rowing and had few friends.

“I just kind of wanted to get through that year so I could focus on my academics and then transition over the summer, because logistically, it just makes the most sense,” he says.

The second his sophomore year ended, he finally got the opportunity to do what he first saw two years ago in that YouTube video: transition from woman to man.

It was a process that took up the entire summer. He started with testosterone injections and returned to Wash. U. as male. He decided to take another year off from rowing, focusing on his transition and schoolwork as a linguistics major.

Still, Kropp felt as if his rowing career had been left unfinished. The injury that had ended his senior year of high school still lingered in his mind. As a result, he sent an email to the new Wash. U. rowing coach, Andrew Black, hoping that they would let him row on the men’s team. Kropp received resounding support from Black and joined the team for his senior year. Now, on Monday through Friday, he wakes up at 4:30 a.m. for 5:30 a.m. practices. On Saturdays, though, he gets to sleep in for 7:30 a.m. practices.

Despite the early hours, he has thoroughly enjoyed the return.

“It took a while, but my fitness has dramatically improved,” Kropp said. “I acclimated really well.”

He regained his strong high school technique and he is now approaching “acceptable male standards” for the 2,000 meter rowing test.

As the stroker of the men’s novice four team, the younger members have reaped the benefits of Kropp’s decision to join the team.

“He’s such a positive force in our program and continues to be a role model for our younger rowers along with the Wash. U. community at large given his kindness and ability to connect with others about his experience as a transgender athlete,” Chase Antonacci, president of the rowing program at Wash. U., said.

Despite his success as a transgender rower, Kropp doesn’t really bring up that he is, in fact, transgender.

“I only talk about it when it’s relevant,” he adds. “Not because I’m ashamed or trying to hide it, but it doesn’t matter in 99 percent of my…interactions with people. Generally, it doesn’t need to come up. I don’t just want to be a transgender person.”

And unless he brings it up, most people don’t notice.

That has come full circle in a Spanish class this year. He previously had a sophomore year class with three of the students in his current class, but they don’t recognize him. To Kropp, this is “gratifying.”

“I guess I did my job on that part,” he said, chuckling.