Auggie in the outfield: Mense leads as baseball’s lone senior

Picture a stereotypical college baseball player. He’s probably tall and broad shouldered with close-cropped hair. He has three days’ worth of five o’clock shadow, wears a hat-sweatshirt-shorts combo most of the time and keeps a can of dip somewhere on his person always.

Auggie Mense is none of these things. Yet still, he is the starting right fielder, leadoff hitter and only senior left on the Washington University baseball team.

Off the field, Mense longboards around campus with his shoulder-length hair pulled into a half-bun on the top of his head. He often wears flannels, the most iconic of which is a patchwork shirt made of four different types of plaid, though sometimes he’ll mix in a recent Goodwill find.

“He has this strange look about him that’s just so warm and so giving,” senior Molly Brodsky, a friend and former roommate of Mense, says. “And you just want to hug this person all the time.”

But on the field, Mense excels, first among Bears in walks and second in on-base percentage with a .435 mark. He’s just what you want from a leadoff hitter, getting on base early and often and letting the guys behind him bring him home. 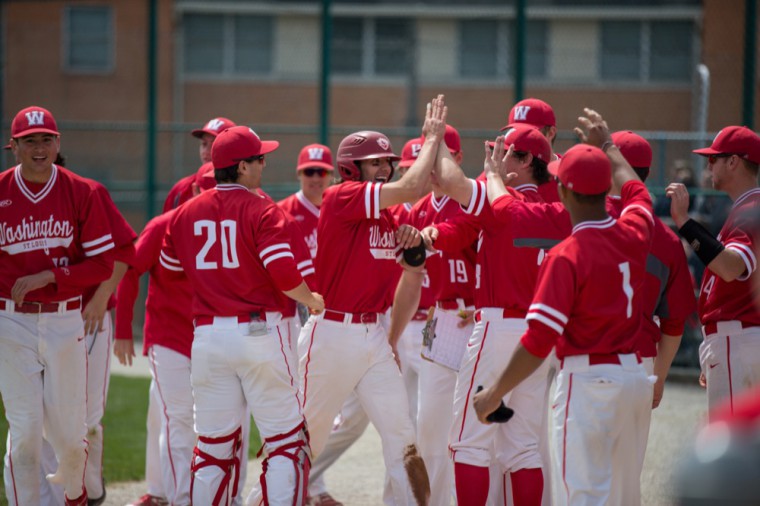 Senior Auggie Mense is congratulated by his teammates outside the dugout after scoring the Bears’ opening run in the first game against Case Western Reserve University April 21.

In the second of a four-game weekend series against No. 10 Case Western Reserve University last week, Mense led off just as everyone expected him to: by working a full-count walk. Two batters later, sophomore first baseman John Brinkman doubled down the right field line to bring him home for the game’s first run.

Letting up after crossing home plate at a full sprint, Mense’s feet came out from under him in the grass. He’s still baseball player Auggie, but as he pops up after hitting the ground, the “huge goofy man” that Brodsky describes emerges, jogging into the dugout amidst high fives with a ear-to-ear grin plastered across his face.

Mense may not resemble the stereotypical baseball player, but he’s not just the goofy skateboarding hipster he sometimes projects to be, either. He’s a man hyper-aware of his identity and its multitudes, even as that identity is changing by the day.

“Hi, my name is Auggie. I play baseball.”

So went Mense’s standard greeting for the first few semesters of college, or if you met him his freshman fall, it went more like, “Hi, I’m Auggie, trying out for the baseball team; who knows if I’m going to make it or not.”

Originally a freshman walk-on, Mense has slid seamlessly into the role of team captain and senior leader these days, settling in at the top of a very young lineup. Only one other starter from the 2017 team, Brinkman, returned, and there are just two returning juniors, second baseman Evan Nagel and pitcher John Howard, on the roster.

Mense is one of 63—63 being the full number of Class of 2018 ballplayers who tried out for the team in the fall of 2014. Whether they quit or were cut, the biggest casualties came during the coaching change following Mense’s freshman year. With new head coach Pat Bloom entering, expectations were raised and the vibe of the baseball team became more competitive, the commitment more time-consuming. It’s what Mense wanted when he first thought of playing college baseball, but as the years have gone by, his fiery passion for the sport has become less exclusive, leaking into other pursuits off the field instead.

“It’s been this really interesting transition of being an athlete first to becoming somebody who is still an athlete, but where that’s only a part of your identity and where it’s a passion that is slowly being eclipsed by other things,” Mense said of his development as a person over the past four years.

Those other things have ranged from becoming a resident advisor to conducting geographic information systems data research to being a facilitator for “The Date” this past fall. However, where Mense has found a passion that rivals his feelings for baseball has been in community organizing and coalition building.

A formative moment for Mense came his freshman fall, following the non-indictment of police officer Darren Wilson in the shooting of Michael Brown. Having grown up in Ferguson, Mo., Mense knew the spatial white flight that plagued the area well. Despite being a fairly diverse community, the public high schools were 95 percent black and the neighborhoods people lived in were strongly segregated.

Mense had long questioned his own identity growing up in that community, wondering how he fit in the Ferguson public schools he attended through middle school and the Clayton, Mo. high school he moved to before eighth grade.

“I’m white passing, but my mother is half-Costa Rican and half-Nicaraguan and that paradox, I’d always held within me,” Mense says.

It was the non-indictment decision his freshman year of college, though, that allowed that identity crisis to reach a head. Sitting in the backseat of his parent’s car in the Walgreens parking lot on the corner of Big Bend Boulevard and Clayton Road, Mense pleaded with his parents to let him go to Ferguson and protest. But his parents wanted him to stay home, safe in Clayton. Eventually Mense relented and stayed. 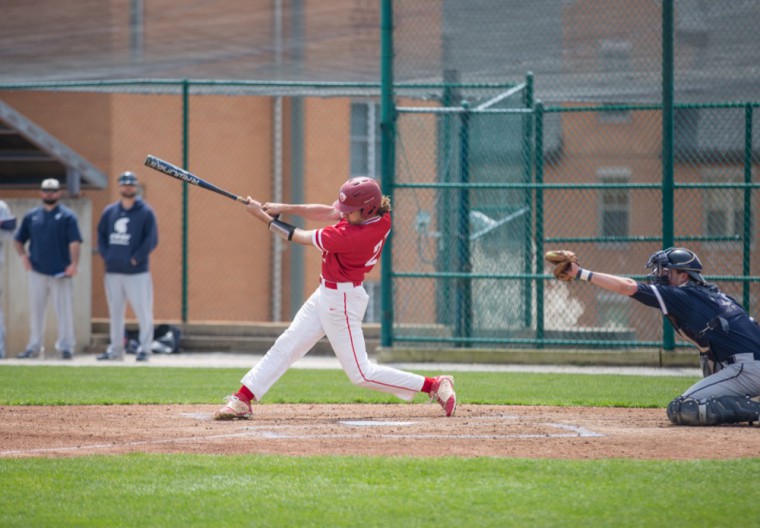 Auggie Mense takes a swing during Wash. U.’s game against Case April 21. The only senior on the team this season, Mense leads the Bears in walks and is second in on-base percentage.

“As children, our parents give us so much that when they ask for something it’s very hard to say no,” Mense remembers. “So I didn’t go.”

The guilt of not going stuck with him; Ferguson was his city, too, after all. He grew up and went to school there but found himself hurting for his city that night, not with it.

Yet, because he stayed in Clayton instead of going to protest, Mense learned what he now believes to be the most critical component of civic action: “Hoping things will change just isn’t enough any more. You have to walk the walk. Your feet have to be there, your body has to be there, your heart has to be there. And that’s what changes systems and changes cities. It’s not people waiting in their living rooms, watching the TV hoping.”

As a team captain this season, Auggie has talked the talk and walked the walk of that civically engaged mentality. Along with Nagel and Howard, Mense has helped to shift the culture around the team, whether that’s by hosting baseball camps for North City high schools or through workshops about masculinity.

“He’s just created an energy or created an essence that even if he’s not the one who’s starting a program, [it’s] so beautiful that it’s been an influence of him and so many other people,” Brodsky says of Mense’s impact.

The three captains wanted to push the team to be more cognizant of its place on campus and in the St. Louis community.

“We had this ability as the only three upperclassmen that our [perceptions] that were shaped by the past captains and leaders on the team [could] be overridden to what we want[ed] the future to look like,” Nagel said of the the trio’s leadership.

One tangible result of this mentality on the younger guys has been the series of masculinity discussions and workshops the sophomores on the team have spearheaded. For Mense and Nagel, it’s encouraging that the sophomores are taking initiative and following the path of social activism the upperclassmen have promoted. It’s also telling of the how roles on the team have changed with the dearth of upperclassmen.

“I think that somebody told me that junior year is more of like the fun uncle type of year,” Nagel said. “When you’re a sophomore you’re a big brother. When you’re a senior you’re kind of the father figure. So I think I skipped that fun uncle season, which I kind of would have enjoyed but not as much as being at the forefront of the culture change.”

While Mense’s personal civic passions primarily manifest in addressing racial inequality, he knows that it can be difficult for a nearly all-white team to address race from a lived experience perspective. The initiative taken by the sophomores to address masculinity then, a topic which every baseball player can relate to, has been an exciting development for Mense to mentor and to watch blossom.

Outside of baseball, Mense still finds ways to advocate against the racial inequality that he saw growing up in Ferguson and has continued to see through his adult life. Most recently, Mense and current Association of Black Students president Jasmine Pickens are working to create a new Minority Needs Coalition, which seeks to create a space on campus to amplify the voices of minority students. That’s what Mense hopes his legacy will be—being part of the work that makes Wash. U. a welcoming, inclusive community.

Mense is comfortable with his own name fading as the four-year cycle of new students on campus continues. He would prefer it that way, actually. And he’s ecstatic that as his body is giving out and his playing days wind down, he’s found a new passion that equals what he has felt toward baseball but that he can still pursue outside of the campus grounds.

Two outs, bottom of the ninth, bases empty. Auggie Mense strides to the plate with one last opportunity to overcome the current 3-2 deficit against Case Western in the second game. Five pitches later, he’s jogging to first, having worked his 29th walk of the season.

Another walk to Nagel and a soft grounder up the middle by Brinkman, which is misplayed by the Case Western shortstop, leave the bases loaded. The old guard—Mense, Nagel, Brinkman—have given the young guys a chance to tie or walkoff with the win.

Sophomore designated hitter Thomas Gardner strides to the plate having been hit by a pitch in his previous at-bat. Quickly in the hole 1-2, Gardner digs in and is promptly plunked on the left shoulder, sending Auggie scampering home for the tying run.

The pressure then comes down on freshman center fielder Sean Robinson, subbed in just an inning earlier. His at-bat, just like Mense’s, lasts five pitches, and again, just like Mense, Robinson starts his walk to first.

As Nagel comes sprinting home to record the winning run, Mense goes sprinting out from the dugout, the first to congratulate Robinson, the walk-off winner. That same goofy grin from the first inning is spreading across his face because in this moment of intense pressure, the young guys got the job done.

With only one homestand remaining, there may not be many of those moments left for Mense, but he can have faith that the new guard will be alright. And for now, while he’s still on the field, celebrating a walk-off win, that same fiery passion is there.