From Whitaker Hall to the Pyeongchang podium

On May 16, 2014, it might have been easy to lose Kendall Gretsch among the green and black robes in Brookings Quadrangle and around the Washington University campus. That day, at Washington University’s 153rd Commencement ceremony, Gretsch was just one of the thousands of robe-clad students standing in the St. Louis sun.

Just under four years later and just over 6,500 miles from St. Louis, there was no losing Gretsch in the crowd. That day, March 10, 2018, she stood atop the podium at the Paralympic Winter Games with a broad smile across her face and the first-ever American biathlon gold medal around her neck. The day after that, she added a gold in cross-country skiing for good measure.

Gretsch said that during her childhood in Downers Grove, Ill., she had no premonition of the Paralympic glory to come. She did, however, have a love of sports, specifically for the Olympic Games. 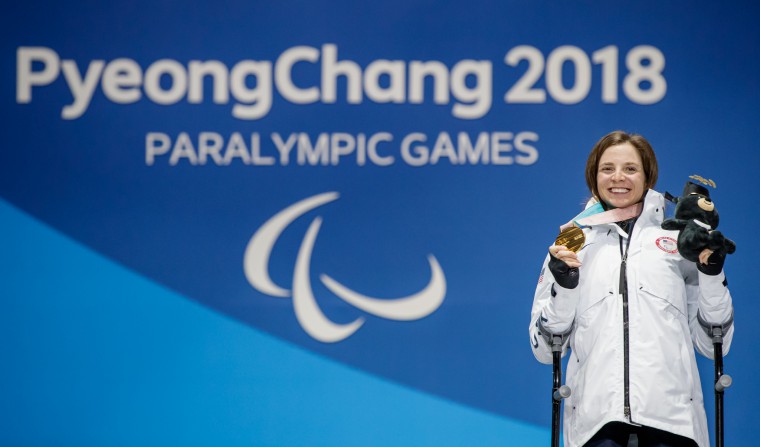 Wash. U. alumna Kendall Gretsch celebrates with one of her two gold medals at the Pyeongchang Winter Paralympic games.

“I’ve always loved the Olympics,” she remembered. “Growing up as a kid, I was absolutely obsessed, would watch every single event, every single interview.”

The conditions of Gretsch’s birth, however, meant that she would never make it to the Olympics, at least in the most traditional sense. She was born with spina bifida, a blanket term for a variety of conditions resulting from complications in the development of the spine before birth. Spina bifida can vary widely in terms of the form of the issue with the spine and the severity of the symptoms, but for Gretsch, the condition means that she walks with the assistance of crutches.

It was actually not until halfway through her Wash. U. career, when she was home for summer vacation after her sophomore year, that Gretsch’s Paralympic dream began to crystallize.

“I’ve always been involved with sports since I was a little kid, but I actually didn’t do my first adaptive sport until I was in college, I think after my sophomore year,” she said. “That was the first time I actually looked more into what the Paralympics were and kind of realized what it was and that I would have the chance to compete. Since I found out about it in college it was always something that I wanted to do.”

The term “adaptive sport” is fairly intuitive, simply referring to a sport that has been adapted so that people with various physical, visual or auditory impairments can compete. The adaptive sport that Gresch fell in love with that summer was the paratriathlon, in which athletes compete in a race composed of swimming, bicycles that can be operated by hand and specially-built racing wheelchairs.

Only a certain type of person truly enjoys a triathlon. It is one of the most brutal, grinding endurance sports out there, and you have to really dedicate yourself to the long hours of sometimes frustrating work. In some ways, it is not unlike being a biomedical engineer at Wash. U. Funnily enough, Gretsch was a biomedical engineering major, too.

From Gretsch’s perspective, however, her triathlon training was no different than the extracurricular activities of any other student. “I think everyone has to have some sort of balance—you can’t just do schoolwork all the time—and that’s just what I chose to do with my free time,” she said. “It helped me relax and kind of de-stress from the pressures of school.”

In the few free moments they have, most Wash. U. students join some kind of cultural club or help a philanthropic organization. Gretsch spent her time becoming one of the best paratriathletes in the world, even if she didn’t realize how good she was at the time.

By the end of her senior year, Gretsch had been training for almost two years, but had never been to a serious competition. Her coaches, however, were impressed by her performance and began to push for her to dive into the world of international paratriathlon.

“They were saying, ‘Oh, you could be really good. You’re just starting out and you’re already doing great,’” she recalled. “I think that motivated me to at least try to just go and see how I would place against everyone else that was competing.”

That first race was the 2014 Pan American Championships, held in Dallas, Texas just a few weeks after Gretsch’s graduation from Wash. U. If Gretsch had any nerves about making her debut on the big stage, they did not show as she blazed into first place.

“That definitely solidified that this could be something that I could do pretty well,” Gretsch said. “So then after that I knew that I had to stick with it.”

“Pretty well” is an understatement. After getting her diploma from Wash. U., Gretsch became the most dominant female paratriathlete in the world. At a glance, the highlights of her results since that Dallas race: first place at the American national championships in 2014, 2015 and 2017 and at three straight world championships between 2014 and 2016. That incredible run also included a 2015 ESPY nomination for Best Female Athlete with a Disability. When it came to the paratriathlon, there was no stopping Kendall Gretsch.

Well, maybe one thing could stop her: the International Olympic Committee (IOC). There are 12 different paratriathlon events, only eight of which make it into each Paralympic games. Gretsch competes in the PT1 classification, which is reserved for athletes who cannot use prosthetic legs for the running and biking portions of the event. For Rio 2016, the women’s PT1 event did not make the cut.

With no shot at the 2016 Paralympics, and no guarantee that her classification would be back four years later, Gretsch decided to switch to a winter sport in order to keep her Paralympic dreams alive. The sports of choice? The Nordic skiing events: cross-country and biathlon.

“I tried cross-country once before I knew for sure which classifications were going to be in Rio,” she said. “So I had tried it out, but once I found out that my classification wasn’t going to be in Rio that definitely added some incentive to commit and try out Nordic skiing more, because I knew I wanted the chance to go to the Paralympics.”

Kendall Gretsch skis towards the finish line at the 2018 Pyeongchang Winter Paralympic Games earlier this month. Gretsch, a Wash. U. graduate, won two gold medals at the games

Gretsch’s decision to start competing in the other season was not without precedent. There is actually a long history of female Paralympians with successful careers in both winter and summer sports. Oksana Masters, one of Gretsch’s Nordic skiing teammates in Pyeongchang, also competes in rowing and cycling.

In late 2016 and early 2017, Gretsch began shifting her training towards the Nordic skiing events: cross-country and biathlon. Gretsch said that though she had some experience in skis, it was not the easiest transition. Although her two Paralympic golds might say otherwise, Gretsch said she is still not completely comfortable in the skis.

“I feel pretty comfortable in certain snow conditions, but it’s definitely the hardest sport technically that I’ve done, so every race that I’ve done and every practice I’m just picking up so much stuff from the people that I’m training with or competing against,” she said.

Gretsch said that while she had practiced cross-country skiing before, she was initially intimidated by the prospect of target shooting in the biathlon. It turned out to be easier than she thought it would be when she was first handed a rifle in a practice.

“I [had] never shot a gun before, and I have incredibly shaky hands. I was like, ‘this is just not going to go well, I don’t know why they’re making me try this,’” she said. “I wouldn’t say it’s easy to pick up—it’s definitely a lot of muscle memory and time that you have to put into it—but I think I kind of liked the added challenge of combining shooting with skiing. It just gives you another aspect you need to think about and a tactic that you need to think about when you’re racing.”

After finishing first at the July 2016 World Paratriathlon Championships, Gretsch fully committed to her new sports, and a year later was back at the top. She was not quite as dominant as she was in the paratriathlon, but in the opening World Cup Event of the 2017-2018 Gretsch tallied five top 10 finishes.

Though Gretsch had nearly four years of international experience under her belt, nothing compares to the scope and frenzy of the Paralympics.

“Just being at the Paralympics is such a different experience, it’s just on such a larger scale,” she said. “And then there’s obviously a lot more media and attention that surrounds it, which is awesome to bring awareness to it.”

Rather than get caught up in the moment, Gretsch thrived in it. However successful she had been over the past year, she said that coming into the race she did not expect to win gold.

“Going into the race I was thinking, ‘I’ll just ski my best and try to shoot as clean as possible,’” she said. “And honestly, beforehand I was just thinking maybe I’ll have a shot at a medal. If I put together my best race maybe I could get a medal, but I definitely did not expect to win.”

Gretsch did not just put together her best race, she put together the best race out of anyone else in the field. Although, because of the staggered start times in Paralympic Nordic skiing, Gretsch had to watch everyone finish before she could confirm that she had won Paralympic gold.

Even when that waiting game was over, Gretsch said that her win didn’t quite register until she physically had the gold medal.

“I don’t think it really sunk in until the medal ceremony that it actually was real,” she said.

Once reality set in, Gretsch had etched her name into the American Olympic history books. No American biathlete had ever won gold in the the Olympics or Paralympics beforehand. Gretsch, however, is not one to rest on her laurels. She’s going back to her job at a healthcare software company in Madison, Wis., but she is eager to find out if she will be waiting two or four years to return to the Paralympics.

The IOC is still deciding which paratriathlon classifications will be included at Tokyo 2020.

“Once they make that final announcement I’ll have a better idea of obviously if I’ll be able to go to Tokyo and then just the amount of time that I’ll need to commit to triathlon,” she said. “It’s something that I always want to keep doing. I love the sport, but it would be tough to do both this and Nordic skiing and working. I’m just kind of waiting to see what happens with that.”

Whether or not Gretsch will ever get to compete in her first sport remains to be seen. On the other hand, she just snagged two Paralympic gold medals in her second. Even if the IOC keeps her out of the summer Olympics, it seems like there really is no stopping Kendall Gretsch.