‘He is Wash. U. basketball:’ Edwards to retire after 37 as head coach

Forty-nine years after playing in his last collegiate game, 37 years after coaching his first game for his alma mater and three years after the court was partially named after him, Mark Edwards announced his retirement as head coach of the Washington University men’s basketball team Wednesday afternoon.

After playing for the Bears from 1965 to 1969 and spending a season as an assistant coach, Edwards left Wash. U. when the University dropped men’s basketball in 1970. Edwards is the only person to have coached the current iteration of the program, taking the helm when then-Athletic Director John Schael resurrected men’s basketball in 1981. In his 37 years on the sideline for the Bears, Edwards amassed one of the most impressive resumes in Division III men’s basketball history: the ninth most wins in the history of the division, three national coach of the year awards and two NCAA championships. 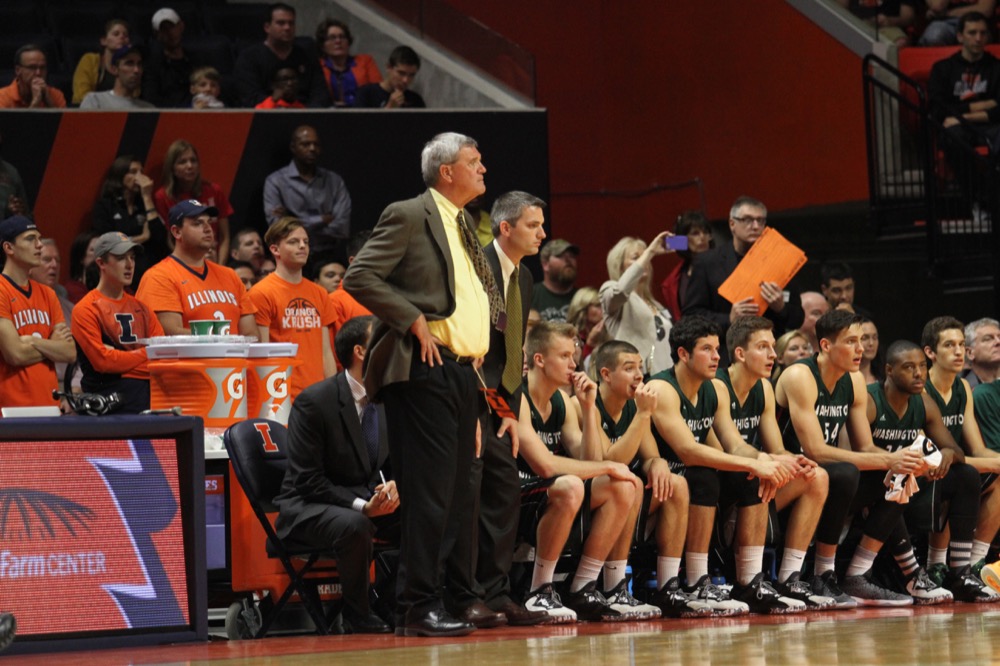 Mark Edwards watches on as the Bears play Division 1 University of Illinois during a 2017 game. Edwards is retiring this year after a very succesful career as the head coach of the men’s basketball team, which included leading the Red and Green to two national championships in 2008 and 2009.

Edwards, who is 70 years old, said that there was no exact moment when he decided to step away from the sideline, but it had been on his mind for a while and that he did not want to take the administration by surprise with his decision.

“Ever since I turned 65, people have been asking ‘How many more years are you going to keep doing this?’ And I always said ‘I think I’ll know the right time when to step away,’” Edwards said. “After I turned 70, I started thinking, ‘Okay, I’ve got to plan ahead.’ I can’t just one day all of a sudden stop and say, ‘Okay this is it,’ and walk down the hall and quit.”

Edwards said that over the course of this past season, he began to realize that the transition after the senior class of 2018 graduates will present the perfect opportunity for a new coach to take the reins.

“Next year every player back is going to have a new role,” he explained. “All five starters were seniors. Any players coming in are going to be new. And if there’s ever time to insert a new look, a new thought, it’s going to be next year.”

Edwards, however, has becomes so ingrained in the Wash. U. basketball program, that it was difficult for some people to imagine that he would ever retire. 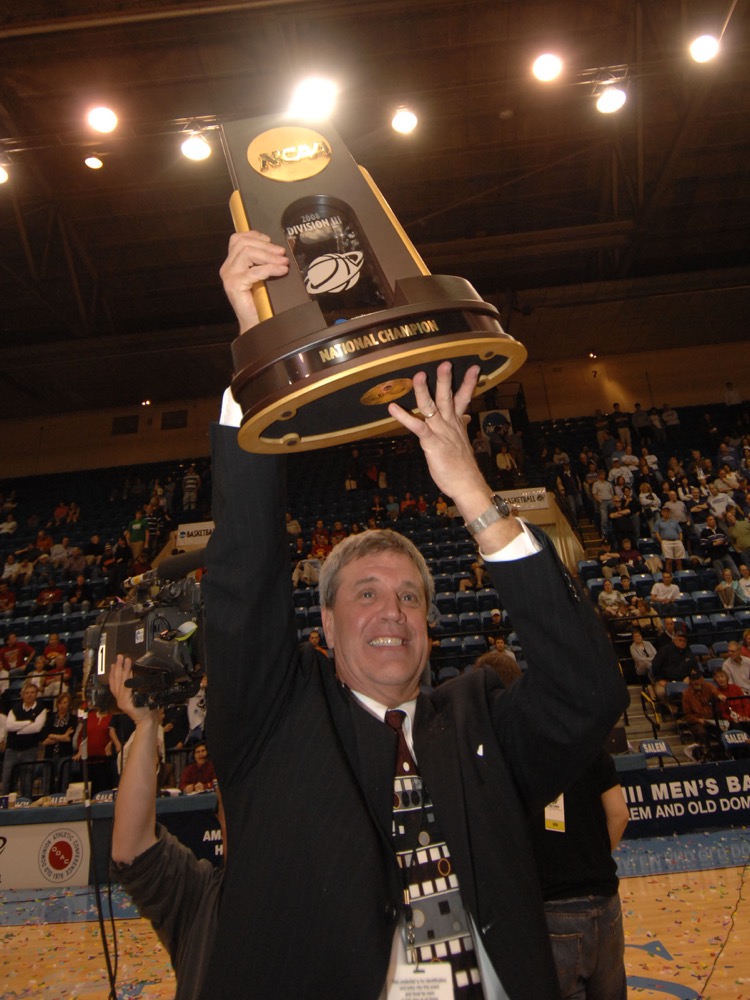 Mark Edwards lifts the 2008 national championship trophy, one of the two he’s won
as head coach of the men’s basketball team.

“He’s been around the game so long,” senior forward Andrew Sanders said. “He had to stop eventually, I guess, but I never really thought it would come to end…But I think it’s a good decision for him, and I wish him the best.”

Edwards’ announcement gave the opportunity for plenty of people—from administrators to players—to reflect on his legacy at the school and his 37 years as head coach. One of the most common themes brought up was Edwards’ ability to connect to his athletes as more than just players and impact their lives.

“Mark Edwards is the epitome of what a basketball coach should be more than a coach—he is a mentor, a teacher, a second father and always readily available for former student-athletes, friends, faculty and staff,” Athletic Director Anthony Azama said in a press release announcing Edwards’ retirement.

“[With] 685 wins, 15 UAA championships, two national championships, his numbers speak for themselves,” assistant athletic director Chris Mitchell said. “But all the lives of the young men that he impacted is probably his biggest legacy here.”

Edwards talks to the huddle in the 1980s.

Sanders agreed wholeheartedly with that characterization. “He knows all of our parents, he talks to them after every game,” he said. “He really makes it a point to get to know us on a deeper level then just basketball.”

Sanders recalled how Edwards has helped his players in a myriad of ways, even distributing resumes to friends and acquaintances. “If you want to go in his office, his door is always open,” he said. “You can talk to him about almost anything, and he’ll be completely honest with you; so, we all really respect him as a person, and we’re really lucky to have had him in our lives for the past four years.”

Edwards himself said that he thinks his biggest accomplishment has been helping Wash. U. athletics grow over the past 37 years into a program in which students can succeed in their classes as well as on the field, something that was just a vision in the minds of Chancellor William Danforth and Schael back in 1981.

“During the 37 years that I’ve been here, that vision has become a reality,” he said. “To me, this has been the greatest thrill, and accomplishment, to be able to walk down campus and to know that my players are in those classrooms and that those professors recognize them as students as well as players.” 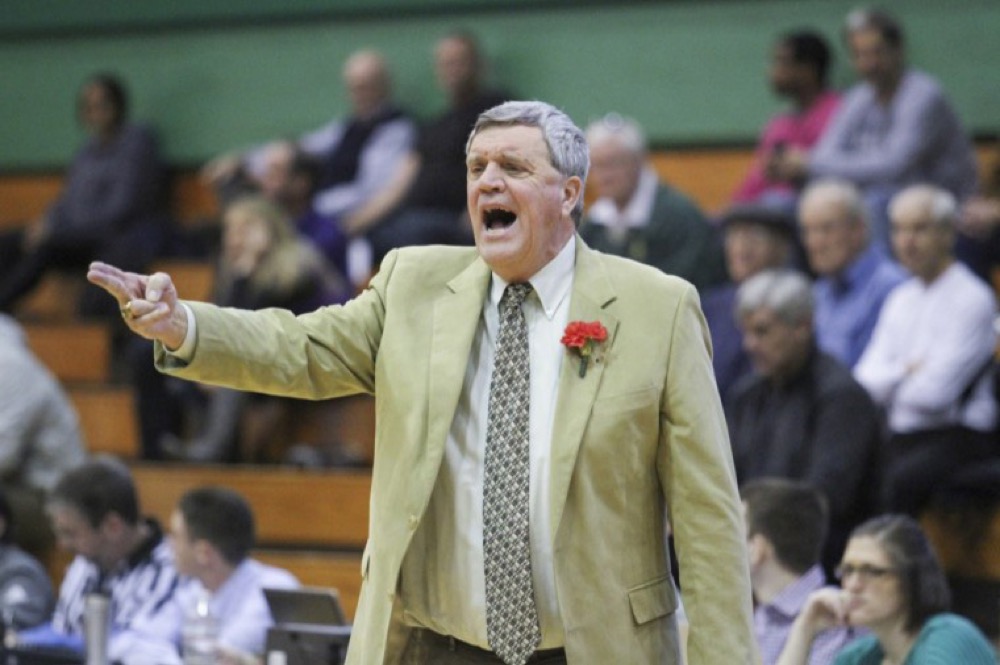 Edwards complains about a call in a 2016 game aganist New York Universtiy.
Edwards finishes his tenure as head coach of the men’s basketball with 685 career wins.

Sanders was a little less modest when assessing what his coach has meant for the Bears. “He is Wash. U. basketball,” he said. “When he came in, there wasn’t a basketball program before him. He’s built this program from the ground up and made it everything that it is today.”

After all the work he has put into nearly four decades coaching the Bears, Edwards said he was not sure what he was going to do with his time in retirement. “I’m in uncharted territory,” he joked. “I’ve never had an offseason.”

Mitchell said he will miss Edwards’ friendship and the relationship they have developed over the past 17 years. “Coach and I, we’ve been through a lot together. I was at all three final fours with Coach, I got to celebrate after both of those national championships,” he said. “He’s a good friend. I definitely look at him as a mentor.”

Edwards said that he has no plans to remain idle in his post-coaching days, after 50 years of involvement in Wash. U. basketball, no one thinks that he will stop being associated with the program.

“I’m sure you will see Mark and Mary Edwards at the Field House, very soon,” Mitchell said.