Pat Coleman, editor emeritus of a prominent college basketball website, said it was one of the craziest tournaments he’s seen in his 20-plus years running the site.

No, he wasn’t talking about the 2018 NCAA Division I Men’s Basketball Tournament, which has seen a 16th seed beat a first seed for the first time, a pair of 11th seeds reach the Sweet 16 and neither of the top two squads in either the South or West region advance past the opening weekend. 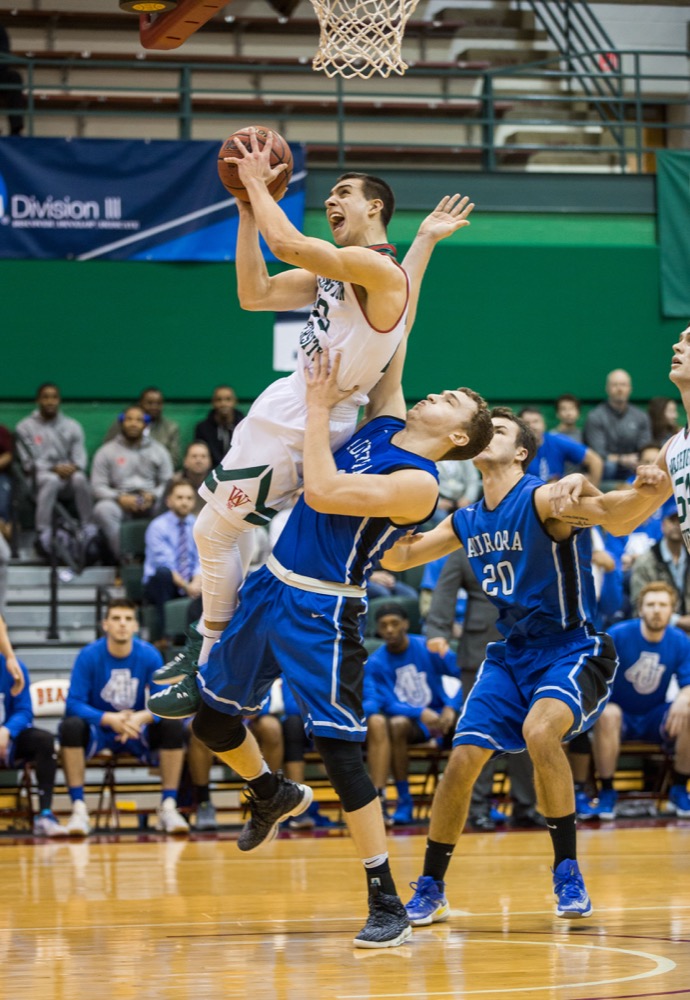 Jake Knupp elevates for a layup through pressure from Aurora defense in the Bears 82-80 loss in the first round of the NCAA tournament. This year’s tournaments featured a host of crazy upsets.

Coleman, of D3hoops.com, was referring to the Division III’s version, which started in the shadows two weeks earlier and wrapped up with the University of Virginia’s wounds still fresh. While most Washington University fans lost interest after the No. 4 Bears’ first-round exit to unranked Aurora University—the equivalent of a No. 1 losing to a No. 16 in March Madness—at the buzzer, the tourney somehow got even more insane afterward.

D3hoops.com predicted that the Red and Green would claim the crown, stating in its tournament preview that “Wash. U.…will take advantage of the home court to advance.” They were right: The eventual champion did begin its title run in the Field House. It just wasn’t the team anyone expected.

In the matchup adjacent to Wash. U.’s in the bracket, Nebraska Wesleyan University faced Maryville College. Nebraska Wesleyan was the strongest unranked team in D3hoops.com’s final regular season rankings with 51 votes, but unranked nonetheless. Ironically, they kicked off their run with a victory over Maryville, which received a single vote in the poll.

Aurora could not replicate its improbable upset, getting ousted by the Prairie Wolves the following day on the Bears’ stomping grounds.

From there, the Prairie Wolves’ course got really wacky. After blowing a seven-point lead with under 2:30 left against No. 8 University of Wisconsin-Platteville, Nebraska Wesleyan buried the Pioneers with a game-winning jumper just before the horn—and on Wisconsin-Platteville’s home court. The Prairie Wolves followed it up by dropping an almost unbelievable 130 points on No. 1 Whitman College while holding the Blues, who had scored at least a hundred points in nearly half their games, to double digits.

Kevin Kucera fends off an Aurora defender during Wash.U.’s first round NCAA tournament matchup. The Bears’ 82-80 loss was just one of many surprise results in this year’s bracket.

Once they’d taken out two top eight teams, Nebraska Wesleyan entered uncharted territory—a final four full of no-names. Joining them in the semifinals: unranked Ramapo College, which took out No. 5 Williams College in the second round; No. 24 University of Wisconsin-Oshkosh, which powered through No. 3 Wittenberg University, No. 6 Emory University and No. 9 Augustana College; and unranked Springfield College, which merely beat the No. 13, 14 and 22 teams.

(No. 2 Whitworth University, the only team to beat Whitman in the regular season, and No. 7 Saint John’s University were also bounced in the first round of the same quarter of the bracket as Wash. U., if you were wondering what happened to the rest of the single-digit teams.)

The Prairie Wolves’ semifinal was a battle, going to overtime before they dominated the extra period, 17-5, to move on to the final. The 12-point margin of victory was the largest lead of the game. And the final followed a similar script: Knotted at 72 with under three minutes to go, the Prairie Wolves scored the final six points of the contest to seize the championship.

And there you have it, folks: Three top-seven teams ousted in the first round, three unranked teams in the final four and a team that hadn’t lost fewer than eight games since the 1990s winning it all. Your move, Division I.