When the Washington University men’s basketball team opened their season November 17 against Wabash University, a new star introduced himself to Division III basketball as freshman Jack Nolan scored 17 points in his first collegiate game. For some of the older fans around the Francis Field House, however, that Nov. 17 game—and many of Nolan’s explosive scoring nights so far this season—might have given them a sense of deja vu, conjuring up memories of the 1990s, when a player with the same last name, who also played with a 22 on his back, spent four years lighting up scoreboards for the Bears.

Jack’s uncle, Gene Nolan, played guard for Wash. U. from 1992 to 1996. Gene compiled an impressive resume during his time in St. Louis: the seventh most points in program history, the eighth most games played, the best career free throw percentage and the most career three-pointers. 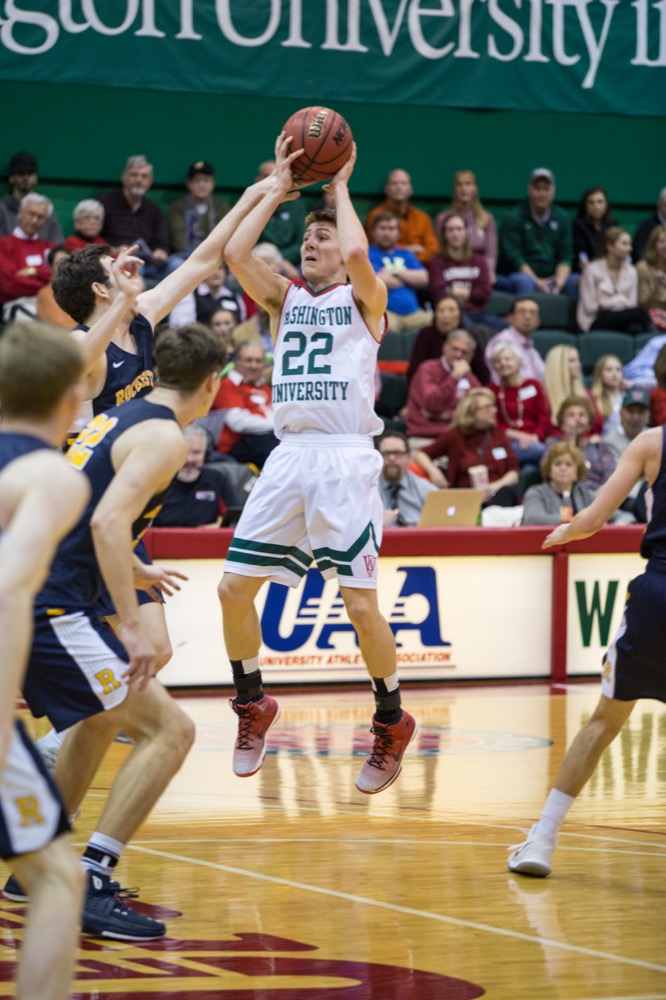 Freshman guard Jack Nolan handles the ball in the Bears’ 77-63 victory against University of Rochester at home Feb. 2.

Nolan’s uncle, Gene, played for the Bears when he was himself a Washington University undergraduate in the mid-1990s.

Gene, now the head basketball coach of Marist High School in the Chicago area, said that he is loving the experience of watching his nephew play for his alma mater.

“I loved my time at Wash. U.,” he said. “To have my nephew experience the same things I was able to experience—it’s been fun.”

Despite the family connection, it was never a given that Jack would follow in his uncle’s footsteps. Jack played high school basketball for Benet Academy—also in the Chicago area—a school that has produced NBA talent like Frank Kaminsky and where he made a name for himself as a true talent and a high-profile Division III prospect.

“My junior year, I was lucky enough to play on an unbelievable team that ended up losing in the state championship,” Jack said. “We had an incredible run.”

That incredible run included a 49-48 win in the state playoff semifinal against Simeon Career Academy, the Chicago basketball powerhouse whose past rosters have boasted the likes of Jabari Parker and Derrick Rose. Jack scored 11 points in that semifinal, and the next year after Benet’s star seniors had graduated, averaged 17.5 points per game.

With a high school career like that, Jack had any number of college programs eager to get him on board. Jack, however, took until the middle of April to make his college decision.

“I was looking at a wide range of schools, but I knew that I wanted something high academic and eventually I knew that Wash. U. was the right place for me,” he said.

While Gene was certainly willing to help his nephew through the recruiting process—and Jack says his uncle was far from disappointed with the eventual decision—he was also careful to make sure Jack’s decision was his own.

“In talking with Jack and going through the process, I was very careful and tried to be understanding that whatever school he chose it was going to be his four years,” he said, adding that his goal was simply to help get Jack to a college where he would be happy, regardless of whether that school was Wash. U.

“When it comes to people you care about, their happiness is the most important thing,” he said. “I did know that if he chose Wash. U.—knowing him, knowing his personality, knowing how much academics and athletics mean to him—I knew that Wash U would be the perfect fit, but obviously I wanted to let him come to that decision on his own.”

Nolan looks to pass in the Red and Green’s game against Central Iowa Dec. 9. The men’s basketball team came away with a win in the game, defeating Central Iowa by a score of 87-83.

One of the biggest deciding factors that drew Jack to Wash. U. was his uncle’s respect for and continuing relationship with head coach Mark Edwards. “It was always the same line,” Jack said of his conversations with his uncle about Edwards. “It was that coach Edwards was the guy who would always be there for you whether it was during my four years here or afterwards.”

Gene echoed this sentiment, saying that Edwards’ personality is one of the reasons that he himself wound up playing for the Bears. “Coach Edwards is a great coach, but he’s an even better person,” he said. “And I think that’s what drew Jack to Wash. U., just like it did for me 25 years ago.”

Once Jack committed to Wash. U., he found himself coming into a team loaded with experienced stars and has featured an all-senior starting five this season. That kind of environment can be intimidating for a young player, but Jack said that the seniors welcomed him with open arms, and that has been a huge reason for his successful rookie campaign.

“For five seniors to share a part of their success with a freshman is very difficult, and it speaks volumes about who they are as people and their character,” he said. “I can’t speak more highly of those five guys for sure.”

Jack first met with senior guard Kevin Kucera, who is also from Chicago, over the summer and from there into his first training camps, Jack said his integration into the team has been perfectly smooth.

It certainly has looked that way on the court. Jack is averaging 11.4 points per game, contributing key baskets for a team that is in the midst of a 12-game winning streak, ranked second in Division III and making serious noise in the national title conversation.

Gene said that he saw this team was headed for a season like this since he made the trip down I-55 to see his old team practice in the fall. Gene recalled a conversation that he had with Kucera during one of these practices, in which he said as much.

“Wash. U. has always been good, like every year,” he said. “And then every once in a couple of years, there’s a chance that a team really has to do something special, like winning a national championship. I told him that I think that’s a team that can do that.”

Jack’s scoring is certainly key to the Bears’ chances come March, and his skill from behind the arc might cause a bit of family rivalry: With 51 three-pointers to his name already, Jack might be in danger of breaking his uncle’s program record of 296.

Both Nolans, however, laughed off that possibility. Jack, so early in his career, is far from focused on Gene’s record. “We’ll see what happens down the road, but I’m just a freshman,” he said “I’m not worried about records or anything, just wins and losses.”

For his part, Gene said he would be more than happy to see his name replaced in the record book after 20 years. “Obviously, I would be thrilled for him—and honestly for any player—to get [the record].”

Rather than worry about any career records, the Nolan family is just enjoying being part of Wash. U. basketball, and that is not limited to just Jack and Gene. 22 years after the last time their son laced up for the Bears, Jack’s grandparents are ecstatic to spend their weekends in the Francis Field House again, according to Gene.

“They’re both retired,” he said. “They’re just thrilled to get the chance to be back on the Wash. U. campus.”

Between the family connection and the team chemistry, it has been hard for Jack to not enjoy being the second Nolan to fill score sheets at Wash. U. so far.

“I’ve never had as much fun playing basketball as I’ve had this year,” he said.