Why the Eagles (and Rocky Balboa) mean so much to Philadelphia

Forty-two years ago, a movie hit the theaters about a young Philadelphia boxer trying to become the heavyweight champion of the world. The film, “Rocky,” captured Philadelphia, giving the city a loveable underdog figure who exemplified perseverance, personality and the fulfillment of the American Dream. In the eyes of many, that figure, Rocky Balboa, was “Philadelphia.”

Forty-two years later, Philadelphia finally has that again. They have a blue-collar team that has overcome all the odds, from the injuries to the countless doubts. Just like Rocky, this Eagles team is Philadelphia: Gritty, hard-working, tough, imperfect, creative, fearless and—most importantly—resilient. 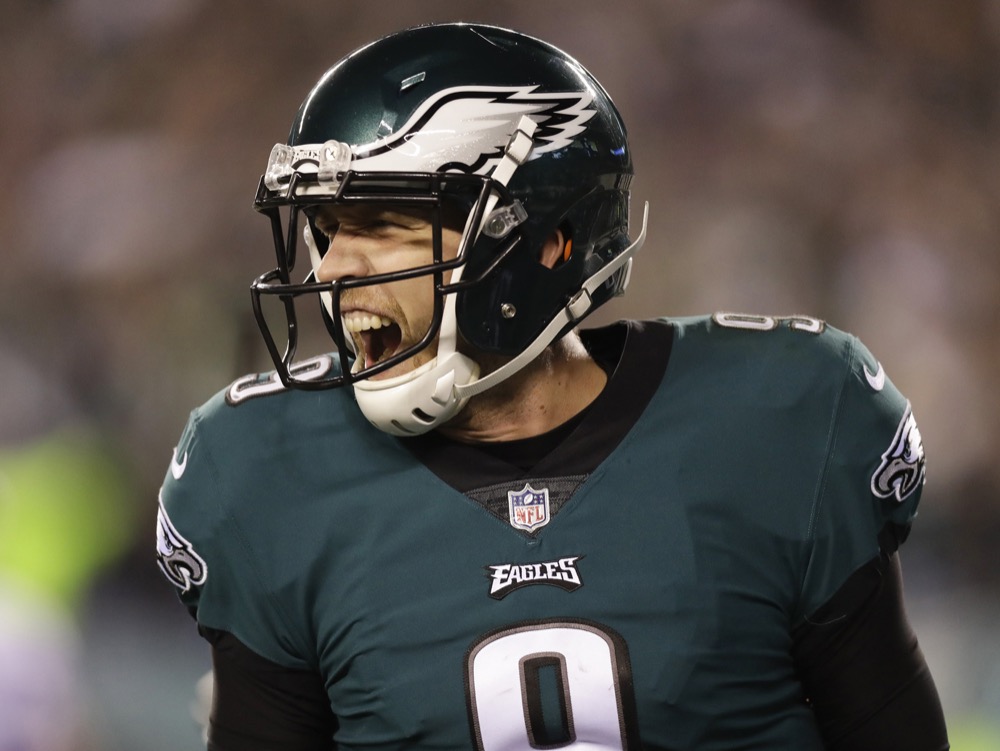 The Eagles’ quarterback Nick Foles celebrates a touchdown pass against the Minnesota
Vikings last Sunday. The Eagles will take on the New England Patriots this Sunday, Feb. 4.

That’s why this team has taken over the city. From the get-go, just like Rocky, the team was overlooked, ranked 20th by NFL.com’s preseason power rankings and 15th by ESPN. No one expected them to do much. They rallied as the outside hate propelled them to one of their best seasons in more than a decade, with a 10-2 record and a first round bye in sights coming into a week 14 game against the Los Angeles Rams. The Eagles were rolling, easily one of the best teams in the NFL. Star quarterback Carson Wentz combined a big arm and an ability to elude the rush, putting him in a good position to win the coveted MVP trophy.

But then they lost Wentz.

Late in the win against the Rams, he tore his ACL.

Most counted the Eagles out of the Super Bowl hunt altogether. “Why Carson Wentz injury may kill Eagles’ Super Bowl hopes” a New York Post article declared. “Can they survive? Maybe,” journalist Michael Wilbon said on his show “Pardon the Interruption.” “But this is a quarterback-driven league. Not a backup driven league. A star quarterback league.”

But they still kept going, earning the number one seed, securing a first-round bye and entering Divisional Round with a 13-3 record. Still, critics were worried about a team without a star offensive player and a “bend-don’t-break” secondary. Even some Eagles fans were weary over the fact that Nick Foles, who had compiled 23 touchdowns and 20 interceptions in the past three seasons, was running the show. That sentiment didn’t fall upon deaf ears, and the Eagles knew that everyone was counting them out. After their win against the Atlanta Falcons in the Divisional Round, tackle Lane Johnson walked into the tunnel wearing an underdog mask.

Not much later, in his postgame press conference, Pederson was asked about the mask and the team’s underdog mentality.

A large reason why is because of their head coach Doug Pederson. The second-year coach has brought energy, ingenuity and a sense of brotherhood to the Eagles franchise. From day one, this team was united. Whether it was former Super Bowl winner LeGarrette Blount on the offensive end or the intelligent vocal leader Malcolm Jenkins on the defensive end, the team has come together under Pederson, creating a culture that had never been built in recent Eagles history. 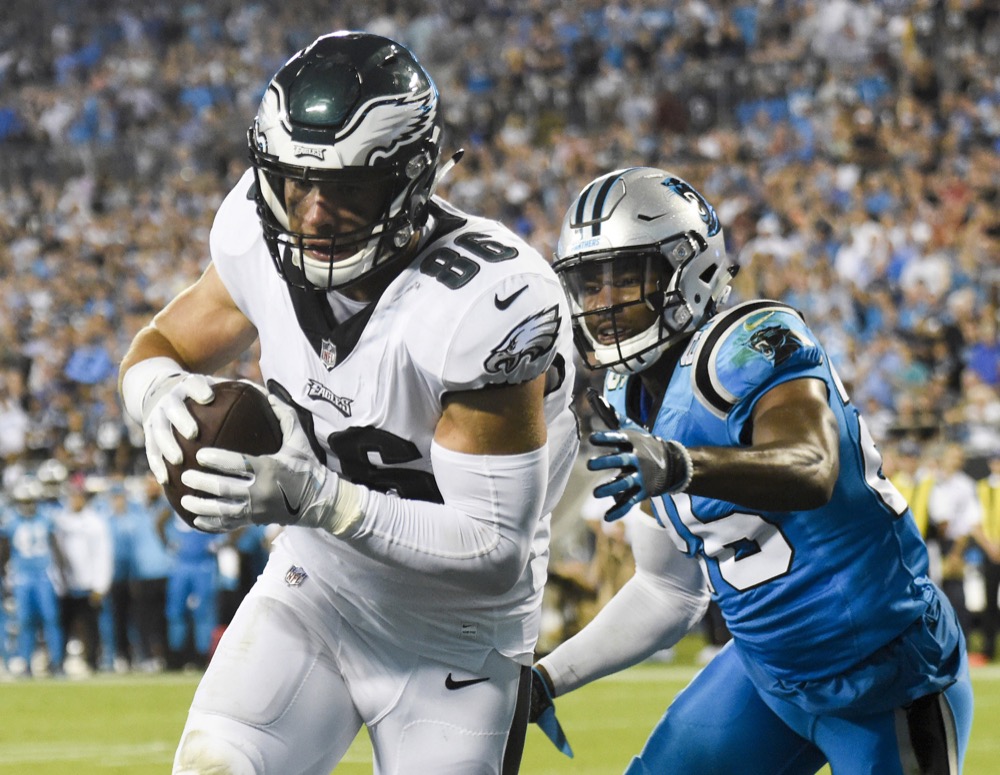 A tight end for the Eagles, Zach Ertz, completes a touchdown pass against the Carolina
Panthers during a regular season game. The Eagles have never before won a Super Bowl.

But they just didn’t do it with emotion and intangibles. They also came ready to play week in and week out, and that started with Pederson. After Wentz went down, Foles finished out the regular season shaky. Pederson went back and watched tape from his amazing season in 2013. Since then, Foles has been great in an up-tempo style offense, hitting quick slants and moving the chains under Pederson’s design. The running back three-headed monster, which has failed with other teams in the NFL, has thrived in Philadelphia. Each of Blount, Jay Ajayi and Corey Clement has brought a different approach and have combined to lead the Eagles to the number three run offense in the NFL even though Blount was their leading single rusher with just 776 yards. And then Pederson’s creative play calls have also worked. The Divisional playoff game was a perfect example, where, for example, he handed the ball off twice to wide receiver Nelson Agholor for a total of 20 yards. Agholor had carried the ball once all season before; so, when he received the handoff on a fake pitch play to the running back early in the second quarter, he sprinted 20 yards to the 3-yard line, setting up an Eagles touchdown. The Falcons defense was stunned.

On defense, they’re tougher than any team in the NFL. They don’t give away anything away easily. With one of the best defensive lines in the league, headlined by perineal superstar Fletcher Cox, they can challenge any offense in the NFL, holding teams to just 1,267 total rush yards on the season, number one in the NFL. Their secondary is opportunistic, fourth in the league in interceptions, and has come up big, time and time again. Headlined by Jenkins, Jalen Mills, Rodney McLeod, Patrick Robinson, Corey Graham and Ronald Darby, they’re quick, smart and play as a unit. It was Robinson who ultimately shifted the momentum in the NFC Championship, picking off Case Keenum and taking it all the way to the house to tie the game at 7.

And now, the Eagles will return to the Super Bowl for the first time since 2005, when they ironically took on Tom Brady and the New England Patriots. Now they will look to take down the reigning Super Bowl champions and arguably the best NFL franchise of all time, just like in “Rocky IV.”

In this movie, Rocky takes on Ivan Drago, the Hulk-like man from Russia. Rocky is easily outmatched in skill, size and strength—destined to lose. Even though Drago kills Apollo Creed in a fight to begin the movie, Rocky does not back down and challenges Drago to a match in Russia. Drago seems invincible, just like Tom Brady and the Patriots, a machine unwilling to stop chugging.

But Rocky eats punches, refusing to go down, and wears out Drago. He somehow pulls it off, battling and battling despite the freakishly strong punches coming his way. And that’s what the Eagles are going to do. This team, which has been broken time and time again, won’t back down from the machine. This is not 13 years ago. This is a different team. This is a different electricity. This is Rocky. This is Philly. This is destiny for the Philadelphia Eagles.