Checking in at the pool: WU swimming and diving midseason update

Swimming: Washington University’s only sport in which athletes are occasionally submerged—can sometimes go under the radar. A large chunk of this year’s swimming and diving season consisted of away meets that overlapped with the hectic fall sports schedule, and even though the spring semester is less than two weeks old, the team now only has one more preparation meet before the UAA championships. There is not much time left to follow the 2017-18 Wash. U. swimming and diving team; so, here is a quick refresher for what you might have missed so far. 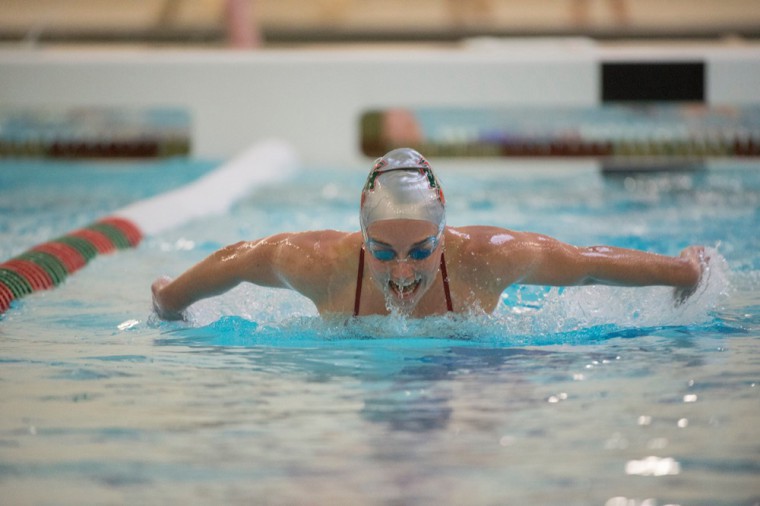 A member of the women’s swim team competes at an event held in December. The Bears’ next big task comes Feb. 12, when the team will compete in Atlanta at the UAA championship.

Swimming and diving season started way back in the fall, when they took the trip out to Columbia, MO, to take part in an all-Missouri, eight-team meet. Both the men’s team and the women’s team took fourth place in the meet, behind three Division I teams in the University of Missouri, Missouri State University and Saint Louis University.

That fourth-place finish has been the low point so far for both teams. With the exception of the weekend of Dec. 2, when the team was split between three separate meets in Ohio, the men have ripped off a run of seven straight wins since the end of September. The women have been almost as good, though they finished second in two dual meets, meaning they only have five first-place finishes over that period.

Right in the middle of this winning streak was their annual winter break training trip to Florida. Head coach Brad Shively said that the trip serves a larger purpose, past the value of simply being able to get a few extra sessions in.

“Certainly there’s a training component to it” he said. “It’s hard to argue that just being focused on training wouldn’t have value. But honestly I think the most important part is just galvanizing the team, getting the team together with one objective: To get through a training trip, to put in the very best work that we can possibly put in.”

While this team dynamic is important to the team’s success, swimming scores are still the sum of a series of individual results, and several Bears have individually stood out this season 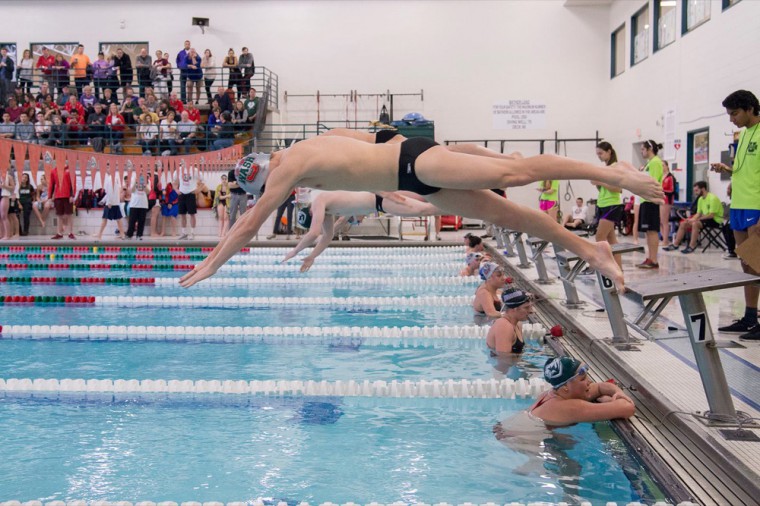 The Bears participate in the WashU Invitational held at the Millstone Pool Jan. 12. The Bears’ team opened the second half of the season with wins on both the men’s and women’s sides.

Heading into this season, the name to watch on the men’s side was junior Brandon Lum. Lum’s career got off to a solid start when he was named UAA Rookie of the Year in 2016, but he truly announced himself to the world of NCAA swimming last March, when he set a Division III record on his way to a national championship in the 200-yard butterfly. Lum currently has just the fifth-best time in that event this season, but swimmers generally try not to swim for their best times until nationals, and no one in Division III is within a second of the 1:44.56 time he set last season.

Sophomore Peyton Wilson has been another standout for the men’s team this year, building off of the success of a freshman campaign in which he set new program records in both backstroke races and took home an individual UAA championship to boot. Wilson currently has the second-best 200-yard backstroke time in the division, and he is just .08 seconds off of the top time.

Wilson’s fellow sophomore Kevin Van Cleave has also stood out for the men’s team so far. He currently holds the best time in the 200-yard individual medley this season and is part of the sixth-best 200-yard medley team in the country, along with Wilson, Lum and sophomore Simon Deshusses.

On the women’s side, the star of the show has been senior Nicole Zanolli. Zanolli is the reigning Division III national swimmer of the week and holds the program records in four races: the 100 freestyle, 200 freestyle, 100 back and 200 back. She also currently holds the best 100-yard individual medley time this season and will look to add to the eight All-American finish she has already amassed in her Wash. U. career.

Another senior, Niamh O’Grady, has also starred for the Bears this season. Already the holder of the Wash. U. record in the 200-yard individual medley, she hold the fourth best time in that event this season and the sixth best time in the 100-yard version.

While it may be easy for Wash. U.’s swimmers to already have one eye on the looming NCAA championships, Shively insists that it is most important to stay focused on the next objective: the UAA championships Feb. 12 in Atlanta, GA.

“We’ve put in a lot of really good work,” he said. “We certainly have more work to do, but we’re really exciting to have the opportunity to rest and get down to Atlanta and represent Wash. U. to the best of our abilities.”