From a postseason formed by baseball’s elite emerge the 104-win Los Angeles Dodgers and 101-win Houston Astros. A 2014 Sports Illustrated cover famously declared then-hapless Houston 2017 World Series champs, while the Dodgers floundered October after October before crafting Hollywood’s best iteration yet. Two star-strung squads collide, both believing the title is theirs to take. Something has to give. 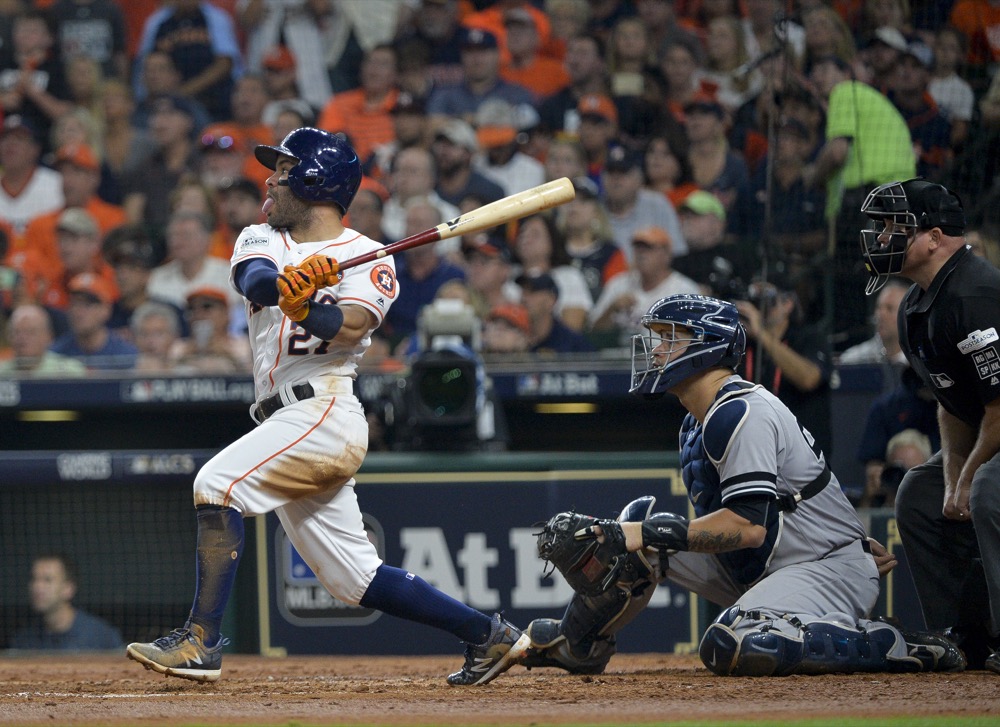 Houston Astros star Jose Altuve hits a solo home run in the fifth inning against the New York Yankees in Game 7 of the American League Championship Series at Minute Maid Park in Houston on Saturday, Oct. 21, 2017. The Astros won 4-0, securing a spot in the World Series.

Things to consider: Houston’s young nucleus—Jose Altuve, Carlos Correa, George Springer and Alex Bregman—is composed entirely of righties, and will face Dodgers lefties Clayton Kershaw, Rich Hill and Alex Wood. Dallas Keuchel and Justin Verlander are throwing as well as ever, and will combine for at least four starts.
That said, the Dodgers are deep. Their best player isn’t named Kershaw, Corey Seager or Cody Bellinger—it’s two-team castoff Justin Turner. The Dodgers are built on random dudes: Career minor leaguer Chris Taylor leads off, backup catcher Austin Barnes posted 2.6 wins above replacement in 262 plate appearances and .215 hitter Enrique Hernandez hit three homers in the National League Championship Series clincher. While Astros manager A.J. Hinch doesn’t seem to trust any pitcher outside of his aces, LA’s Dave Roberts mixes and matches at will on the way to superhuman Kenley Jansen. I would say the Dodgers sweep, but I want Best Pitcher on the Planet Kershaw (who has more Cy Youngs than Keuchel and Verlander combined) to toss two perfect games, not one. It’s sad that perfect human beings Carlos Beltran and Curtis Granderson can’t both get a ring, but Dodgers fans will be dancing in La La Land. Dodgers in 5.
—Rohan Gupta, Senior Sports Editor

The Dodgers are very good. Kershaw, in all likelihood, is not a human being. Rather, he is probably some kind of baseball robot, invented in a lab to throw a perfect curveball and frustrate hundreds of batters. In 2017 he took home 18 wins (the best total in the National League, because of course it was) and racked up a 2.31 earned run average (the best in the NL, because of course it was). Wood—the person with the second-best win total in the NL and the highest win percentage—is also on the Dodgers.
But here’s the thing: Playoff baseball is maybe 30 percent baseball and 70 percent narrative. With all respect to the 2016 Cleveland Indians, they could have started Pablo Sanchez and still would have lost to the Chicago Cubs. Even when they were down 3-1, the Cubs had narrative on their side. A young, dynamic group of players, coming off of an incredible season with a chance to break one of the most notorious sports curses ever? That is simply unstoppable.
So the question is not really of which is the better baseball team, but which baseball team has the better story. Sure, the Dodgers have a kind of fun redemption story, because they used to lose all the time, but you have to remember that they are basically the West Coast New York Yankees. Per a recent Forbes list, the Dodgers are the sixth most valuable sports team in the world, and were recently purchased for over $2 billion. They basically have become really good by throwing a lot of money at all of their problems. Apparently, their payroll is still pretty low, but don’t bother me with facts. This is about which baseball movie I want to watch, and I don’t want to watch the Dodgers’ movie.
You know what movie I do want to watch? A movie about a team that is really bad, so bad that they are the laughing stock of the entire league. But they are also young, and through all the losing this young core keeps getting better and better and better and all of a sudden this group of likeable new stars has become one of the best in baseball. And they become beloved fixtures of their city, a city that during the season is devastated by a massive hurricane. They become a rallying symbol for their citizens, who fully support them through a postseason run. But it still will be dramatic, because both teams are really good, and we need the added tension for the upcoming blockbuster “Houston Strong: The 2017 Astros Story.” Astros in 7.
—Jon Lewis, Senior Sports Editor

Los Angeles Dodgers ace Clayton Kershaw pitches the ball against the Chicago Cubs in the first inning during Game 5 of the National League Championship Series at Chicago’s Wrigley Field on Thursday, Oct. 19, 2017. The Dodgers won to secure their spot in the World Series.

The Dodgers may have a deep pitching staff, but I think we’re all forgetting how good the Astros offense really was in 2017. They sported a 121 weighted runs created plus. That’s better than that of the 1976 Big Red Machine. That’s better than that of the ’53 Dodgers with Jackie and Pee Wee. In fact, it’s only five points lower than that of the hallowed 1927 Yankees lineup, aptly nicknamed “Murderers’ Row.” Kershaw can throw all the knee-buckling curves he wants, but even he hasn’t faced a lineup quite like this.
This lineup is deep, but more importantly, patient. Seven of their eight regulars sport a walk rate at or above 8 percent. In a World Series where bullpens are often ridden into the ground, that approach will prove very taxing for Dodger pitchers. Astros in 6.
—Aaron Brezel, Managing Editor

I’m not going to dive into any statistics (as fun as that is to do, I think the above entries have that taken care of).
Instead, I’m going to present the 2006 New Orleans Saints (I know, wrong sport, but bear with me here) as my reasoning for why the Astros will win. Hurricane Katrina ravaged the city, and the team had one of its most impressive seasons to that point, making it to the NFC championship game for the first time in its history. In wake of the tragedy that was Hurricane Katrina, the Saints’ success brought hope to the city.
With Hurricane Harvey, Houston was badly destroyed—and now, the Astros have the chance to bring together their community, rallying Houstonians around America’s greatest pastime.
On paper, the Dodgers look like the better team, with their wealth of young talent, historically good season and -140 odds in Las Vegas. They handily defeated the Cubs even with star shortstop Seager sidelined, and Roberts has demonstrated his ability to effectively utilize his deep bullpen in creative ways to stay in games late.
But the Astros have the grit and determination that comes from playing in a recently wrecked city. Altuve is one of the league’s brightest stars, and he’ll come through on the big stage, just as he’s done throughout the rest of the playoffs.
Last week, I was rooting for the Cubs to go back-to-back (R.I.P.), but now, I’m saying: Astros in 5.
—Ella Chochrek, Editor-in-Chief
I may not know much about baseball, but I do know that there’s no way the Brooklyn Dodgers can lose to the Astros. With stars like Jackie Robinson, Sandy Koufax and Carl Furillo, the Dodgers are a shoo-in, not to mention that a Dodgers win would bring some joy to my old, Jewish heart. The Brooklyn Dodgers have it all: the city, the fans and the name of a major franchise. What do the Astros have? Dodgers in 6.
—Josh Zucker, Design Chief

Well, I don’t watch baseball or care about baseball, and I definitely don’t have enough time to be considering baseball, but look at me now. When I think of baseball I really just consider the pants. The pants are what make this game possible. Take football. Despite wearing straight up armor, they still find a way to wear tight “legging-esque” pants. Baseball does the same thing and I love it. Arguably, I think baseball pants are better as they don’t come with all the bulky stuff on top. Everything is nice and clean and form fitting. They look like people instead of apes. I’m going to say Houston Astros because “A” comes before “D,” I’m from Texas and “Astro” sounds like astrology, which I think is more interesting than “Dodgers,” which sounds like a really bad name for a dodgeball team. Astros in 6.
—Katy Hudson, Staff Writer