Protest on the field and on campus: Thoughts on the wave of NFL protests and their effects on universities

Although American universities are often perceived as sheltering their students from the real world, they consistently serve as gathering places for those hoping to stand up for what is right. Since before the Vietnam War-era, college students across the United States have found strength in numbers as they protest government actions and decisions that they see as wrong. Because of this, it comes as no surprise that the NFL national anthem protests that recently swept the country into yet another frenzy of controversy have now reached the turf fields of America’s college football teams.

As the anthem demonstrations have become more widespread, some college football players began following the lead of their professional counterparts by kneeling during the anthem. Everyone’s reason for doing so is different: Some players kneel to protest police brutality, some to make a non-vocal statement against President Donald Trump, and some to simply support equality in this country. But just as some NFL teams have spoken out against the protests, it seems as if not all colleges plan on allowing their players to speak their minds. Oct. 12, ESPN reported that “Division III Albright College [cut a player] for kneeling during the anthem.” 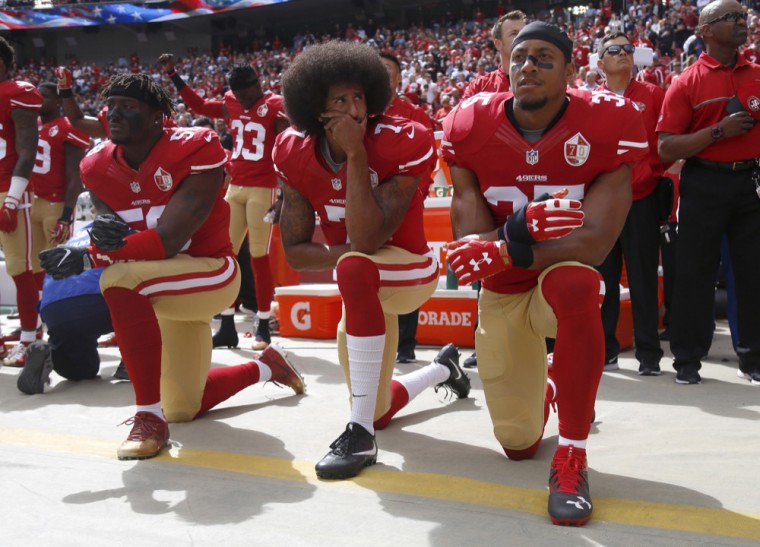 Eli Harold, Colin Kaepernick and Eric Reed kneel during the national anthem before a NFL game. Protests have reached down to the college level as students reconcile with divisive language.

The fierce political opposition that has surfaced in this country over the past year or so has made it nearly impossible to not take a stance on Trump-related issues; even most of the voters who were on the fence during election season have swayed either away from or towards our current president due to his undeniably divisive actions. The fact that America has fallen upon less politically ambiguous times could definitely be construed as good (people know who they do and don’t support), but in the end is only damaging to the already weak sense of nationalism that exists in the United States. Rallies with masses people sporting the red hats with which we have become so familiar do not prove that there is any sort of true, universal patriotism in this country—sure, a sense of unity may be present among those who find themselves in political echo chambers, but the fact that so many people in the United States support rhetoric that is so damaging to other citizens proves that the nation is further from any legitimate form of nationalism than it has been in a long time. It almost seems as if many so-called “nationalists” want to support the country itself, but not the diversity and heterogeneity that exists within it. This is problematic at its most basic level: Trump’s nationalism is defined by its tendency to support the idea of an America where a great deal of the country’s current inhabitants are excluded.

In the realm of professional sports, this plays out as troubling at best and destructive at worst. Fans who do support Donald Trump are being forced to make a difficult decision—in their eyes, they must choose the sport that they love or the country they were born in. Even if this is not true—it definitely isn’t—countless Americans believe that they must do their patriotic duty by following the request of their president that they not support or watch the NFL.

This request from President Trump is both unreasonable and unfair. Football is an essential part of America’s history and culture, and it will not be easy for many Americans to let go of the sport that they grew up on. Nevertheless, he prioritizes his own agenda by coercing free citizens to do what he wants. Second, it has deepened the already expanding racial divide in this country. The belief that Trump might privately be a white nationalist is widely held and, at this point, backed up by some pretty solid evidence. This means that he and his supporters’ assertions that the NFL players who are kneeling should be “grateful” that society gave them some sort of gift can only be taken as a shot at the large minority demographic in the NFL. In his own twisted way, Trump is suggesting that the African-American football players who have worked countless hours and dedicated their lives to becoming the greatest in and on their field should somehow feel “lucky,” as if they were handed their successes on a silver platter. Unlike Trump, professional football players have to earn their spot on the field; a Super Bowl ring cannot be passed down by parents in the same way that, say, a real estate empire can.

The implications for conflict on college campuses as the professional protests threaten to spill over manifest differently, but are equally disturbing. In the same way that it seemed like divisions were forming between the people and the government of the United States, there is undoubtedly a potential for tension between the student body and administration of college campuses where these protests and counteractions take place. Students who see the protests as anti-American will view the actions of any of their school’s football players who may choose to protest as distasteful, decreasing support for the team and creating an unproductive ideological clash between themselves and the players.

On the other hand, students who support the protests will become angry with their school’s administration if they choose to ban or punish the protests. Considering the fact that universities are the place where future leaders are educated and formed, this type of negative conflict is troubling. While political and social debates can make students smarter and more open-minded, Trump’s unabashed, aggressive rhetoric has made it difficult to foster positive interaction between people who do and don’t support him.

Regardless of the unsettling nature of these protests and the nationwide divisions that they represent, it is more important to ask how we should move forward than to ask what we should be afraid of. American universities and the NFL have become the newest pawns during a political era where no one seems to be safe from being dragged into the conflict. While the right answer is not clear, it must lie somewhere alongside the values of free speech and national unity, two things that seem difficult to consolidate at this moment. Right now, only one thing is for sure.

America is a nation built upon the idea that hard work can get you to where you want to be. Although this country is not a pure meritocracy and most likely never will be due to historical discrimination and unequal opportunity, it is essential that those with a voice speak up for the truly American ideas that still exist in our textbooks somewhere. Let’s stop telling people to sit down, shut up and feel lucky, and begin acknowledging that people in this country have a right to demand change.