In the most dramatic moment of the 2017 Washington University men’s soccer season so far, freshman forward Will Sproule scored in the 102nd minute in his first college appearance, and the Bears moved to 5-0-1 with a 1-0 win Saturday at Wheaton College in Wheaton, Ill.

The goal came nearly two hours into a mostly defensive, chippy affair, off a free kick from the corner of the field by sophomore midfielder Makio Yamamoto. Sproule won the ball in the air and headed it into the net for the victory. With his second assist to go along with one goal, Yamamoto is now second among all Bears with four points, contributing at least one point in three of six games. 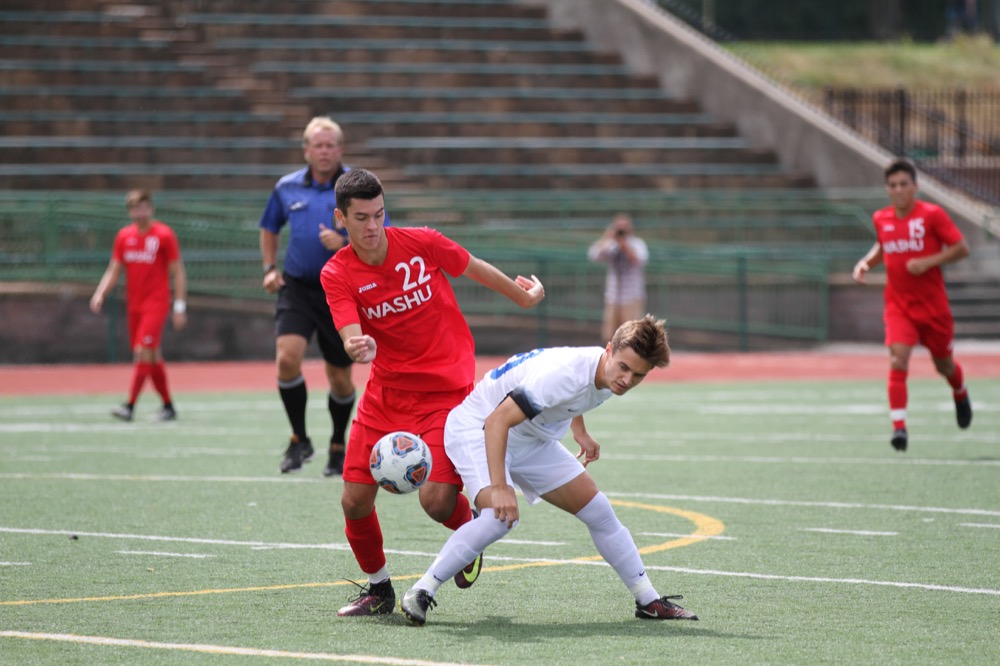 Junior Kyle Perez battles for the ball against a Luther defender in a game last year. Coming off of a double-overtime win against Wheaton, the Bears’ record improves to 5-0-1 on the season.

The Red and Green defense was effective yet again, led by senior goalkeeper Colin McCune, who made six saves in his longest shutout of the season. McCune made a game-saving play in the fifth minute of overtime, coming up with a key breakaway save to prevent a Wheaton winner. His season goals against average is down to just 0.32.

Wash. U.’s offense uncharacteristically sputtered, failing to score in regulation after three consecutive games scoring multiple goals. They were outshot, 17-9, for just the second time this year and only put two shots on target, their lowest total thus far. Only one Bear, junior midfielder Marco Pinheiro, was able to get off more than one shot.

Wash. U.’s primary offensive threat, junior forward Ryan Sproule—Will’s older brother—was held mostly in check. The Bear leader in goals (five) and points (10), he took just one shot, his most quiet performance of the year. With Ryan not a factor, the younger Sproule instead came through and won the game on the first shot of his Wash. U. career.

The Bears, riding a five-game winning streak, host Greenville University Tuesday before traveling to Emory University for their first UAA contest of the year Saturday.