Given all the logistics involved in moving over 60 players across the country, football schedules are sometimes set four, five, even ten years in advance. Throwing together a new calendar in 18 months is a lot like finding partners for a group project the day before it’s due.

In a unique twist to the term “student athletics,” the Washington University football team had to do just that for the 2017 season. 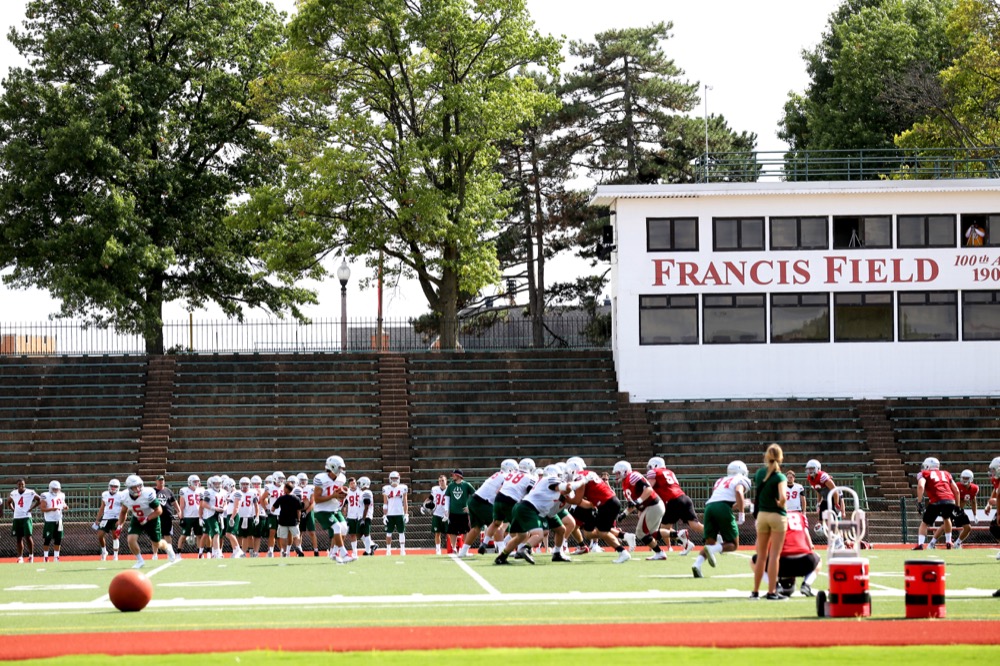 The Bears quarterback steps back from the line of scrimmage as he prepares to throw to one of his recievers. This season the Bears will compete as an independent team without a conference.

Two years ago, the Bears announced that they would join the College Conference of Illinois and Wisconsin (CCIW) starting in 2018, a move intended to solidify a more consistent schedule and decrease travel time for student-athletes. In the interim, they would play the 2015 and 2016 seasons in the Southern Athletic Association (SAA). That left a big daunting hole in 2017.

Calls went out starting a year and a half ago. With no conference to guarantee a chunk of the schedule, the team built the season a game at a time. The old University Athletic Association teams came first: Carnegie Mellon University, Case Western University and the University of Chicago. Then came five more, one by one. Within a year, they had eight and Buena Vista University made nine. Head coach Larry Kindbom estimates that he made some 30 to 40 calls to put the schedule together.

“We started from scratch,” Kindbom said. “For us, to get the games that we got is incredible.”

To understand Wash. U.’s current state of limbo, one has to head back to 2013. That year, the Bears made just their second-ever playoff appearance, earning an at-large bid despite a taxing travel schedule that took them from Minnesota to Pennsylvania to Georgia. While the team was technically part of the UAA, the fact that the conference only had three other teams meant they had to throw together seven-tenths of their schedule each season. This became an increasingly difficult task with more and more programs joining conferences each year, according to Kindbom. Seeking a more consistent and geographically feasible slate of opponents, retired athletic director John Schale entered into talks to join the SAA, a collection of athletic programs spanning from Arkansas to Georgia. Chicago, another UAA castoff, had the same idea.

Both Wash. U. and Chicago arranged to join the SAA starting in 2015. But before the Bears could play their first game, they had a change of heart. In order to limit travel for student-athletes and transportation expenses for the University, the team announced three months before their season opener that they would transfer to the CCIW for 2018. Instead of seven hour bus rides to Jackson, Miss. and Berry Mountain Ga., Wash. U. would travel to schools clustered around the Chicago metro area.

Chicago made a similar decision. Instead of sticking in the SAA, they arranged to join the more accessible Midwest Conference starting in 2017, a year earlier than Wash. U.

The whole sequence of events caught SAA commissioner Jay Gardiner off guard. Originally, the plan was for Wash. U. to stay permanently, but when both the Bears and Maroons indicated their plans for departure sometime in the first half of 2015, it caused a scheduling scramble on the SAA’s end.

“We were a little surprised when they made the decision to leave after just two years,” Gardiner said. “Once we found that out, we felt like we needed to protect our league a little bit, so we went and found two schools that were also interested.”

The SAA found Austin College and Trinity University to fill the void. The new plan was for the Kangaroos and Tigers to join the league as soon as possible—meaning 2017.

That’s where the trouble started. Chicago had already planned to leave that season, so it was in the clear. Wash. U., on the other hand, still had one more year before joining the CCIW. According to Gardiner, having Wash. U. in addition to Austin and Trinity was not an option because it would have forced two bye weeks onto the SAA docket rather than the usual one. Something had to give, and it ended up being the Bears’ membership.

What this means is that for 2017, the Bears have a slightly abbreviated season, playing just nine games as an independent school before joining the CCIW next year. For Kindbom, it was a savvy move considering the circumstances.

“Nobody wants to play nine, but I’m thinking we might’ve only had four or five,” Kindbom said. “We’re further ahead than I thought would have been possible.”