When Jeremy Bush stepped back onto the court Sunday for the third set of his match against the University of Chicago’s Luke Tsai, everything was on the line for the Washington University men’s tennis team. In a heavyweight battle between the sixth-ranked Bears and the No. 5 Maroons, the previous eight matches had been split evenly, 4-4. The whole match, therefore, would hinge on how Bush performed in the third set of his match at fourth singles.

“Right when Bernardo won his match,” Bush said, referring to freshman Bernardo Neves’ 7-5, 7-5 victory, “I had lost the second set of mine. So, we all knew that it was going to come down to my last set.”

The senior pulled through, and did so dramatically, taking the third set all the way to a tiebreak, which he won 8-6. It was bit of a redemption story for Wash. U., who had lost a distant 7-2 to Chicago in the ITA Indoor National Championship semifinals. 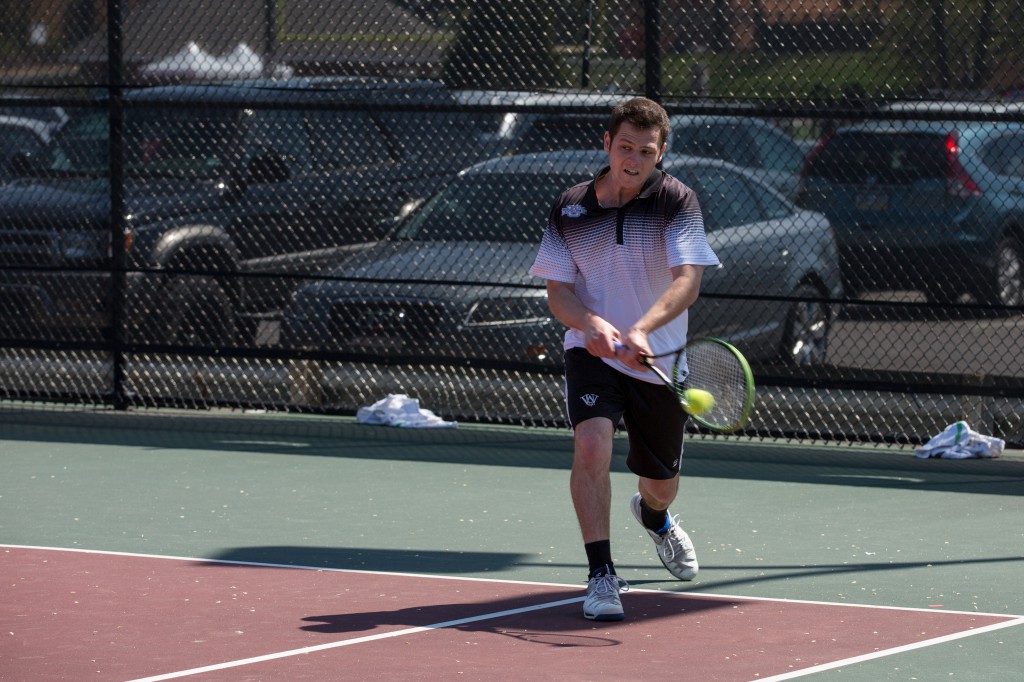 Senior Jeremy Bush hits the ball with a backhand during a match against Southwest Baptist University. Bush won his match this weekend in a third set tie break this weekend, leading to a Bears team win against No. 5-ranked University of Chicago.

“We kind of got crushed there,” Bush said. “But we’ve been working very hard as a team, trying to improve on that result.”

Chicago was the Bears’ second challenger of the weekend, after Wash. U. had hosted the University of Wisconsin-Whitewater Friday evening. The match started with some nerves for the Bears, as the one doubles team of Jason Haugen and Konrad Kozlowski dropped their match, 8-4. The other doubles pairs, however, would pick up for their teammates and give Wash. U. the lead heading into singles play. Bush and his doubles partner J.J. Kroot won their matchup 8-3, while the new all-freshmen team of Neves and Jesse Engel combined to similar effect, picking up an 8-6 win.

Things would be slightly more comfortable for Wash. U. in singles. Though senior John Carswell lost in straight sets at two singles, 6-4, 6-2, the rest of the lineup managed fairly routine wins. At the one spot, Johnny Wu only dropped one game in two sets on the way to 6-1, 6-0 victory, while Neves also coasted to a 6-0, 6-2 win at three. Bush and Kroot won comprehensive straight set victories at four and six singles, respectively. Shaun Berman fought his way through a tough first set, winning it 7-6 with a 10-8 win in the tiebreaker, only to find the second set much more lopsided. He finished his match off with a 6-1 victory in the second set. When all was said and done, the Bears had won five of the six singles matchups en route to a 7-2 victory.

Though Whitewater was a strong team, Chicago was the marquee matchup of the weekend. The Maroons boast two nationally ranked doubles teams and three ranked singles players. The two programs are also UAA powerhouses and rivals whose matches tend to have major implications for the conference and national playoffs.

“Chicago is always a fun match,” Bush said. “They’re really good every year, and they always have good freshman recruits.”

The teams were thrown for a bit of a loop Sunday morning, as the match was moved from the Tao Tennis Center on the Danforth Campus to the Sunset Tennis Center in Forest Park due to fear of rain.

If the shift indoors or their loss less than 48 hours before affected Haugen and Kozlowski, it did not show when they squared off against Chicago’s Erik Kerrigan and Ninan Kumar, the fifteenth-ranked pair in the nation. It was a nail-biter, going all the way to a tiebreak, where Haugen and Kozlowski just edged their opponents, 10-8, earning a 9-8 victory in the match. Bush pointed at that narrow victory as a key to the match, especially because Wash. U.’s other doubles pairs had lost.

“Jason and Konrad came up really clutch,” he said. “If they had lost that, then we would have been down 3-0 after singles and that’s always very difficult to come back from.”

Because of that victory, the Bears were only facing a 2-1 deficit heading into singles play.

The singles matches proved to be just as evenly split as the doubles. Johnny Wu won his matchup at one singles in three sets, downing No. 22 Nicolas Chua 6-0, 1-6, 6-4. Carswell dropped his matchup 6-2, 6-2, and though freshman Robin Engel managed to push No. 14 Peter Leung to three sets, he ultimately fell 6-0, 4-6, 6-2. Wins from Neves and Kroot drew the scores level at 4-4, and set up Bush for a dramatic finale.

“I was trying to zone everything out,” Bush said of his mindset when he came out for the decisive set. “I was trying to focus on my match and not think about the score, and try to play each point separately.”

Bush also credited his teammates and his coaches for their support in his win.

“I had great support from my teammates on the sidelines, and that gave me some energy in a long match,” he said.

Bush’s win sealed a 5-4 victory in the Bears’ last match before flying down to Florida next weekend for the UAA championships.

“This match gave us some confidence going into UAAs,” Bush said, though he also maintained that the team needs to stay focused and not take anything for granted, especially because they will in all likelihood meet Chicago again in less than a week. Emory will almost certainly be the top seed in the bracket, meaning if both Wash. U. and Chicago make the semifinals they will face off again.

Bush cited a favorite saying of one of his junior tennis coaches to describe the attitude he wants from his teammates.

“Be proud, not satisfied. Each match you play is separate,” he said. “We have to be focused. We can’t be satisfied that we beat [Chicago].”