The wait is over: After a five-year title drought for the Washington University athletic program, women’s soccer has brought home a national championship to the Danforth Campus. But beyond that crowning moment, there have been plenty of other notable performances around the Athletic Complex these past 12 months.

No sense in hiding it: Women’s soccer is going to take the top spot—but you can read ahead to find out how the other nine shake out. 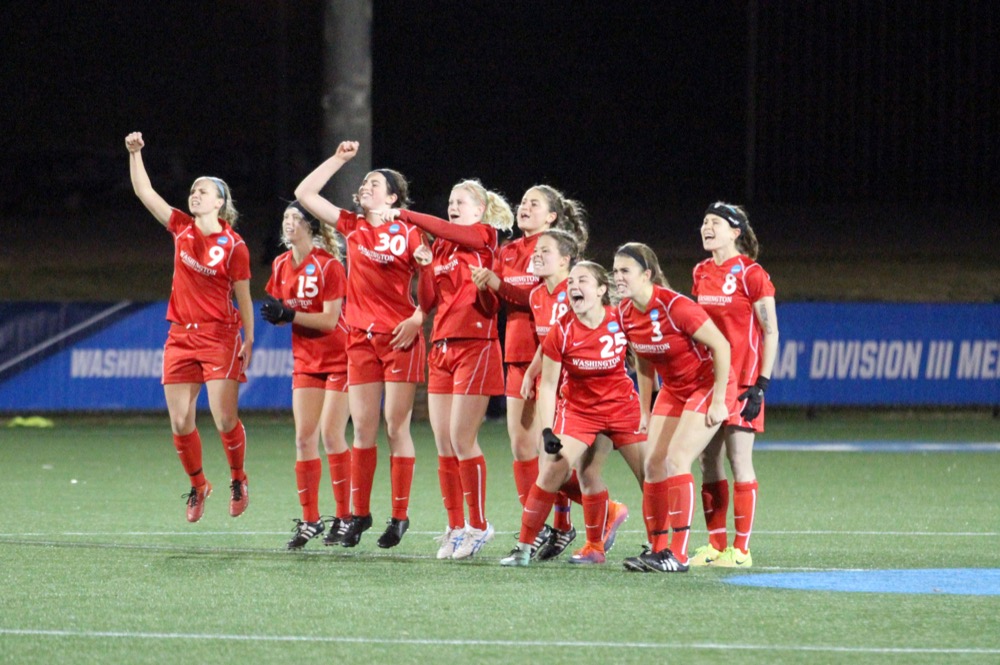 Wash. U. players celebrate in the NCAA Division III final game against Messiah College to win the championship.

In its first game against a Big Ten opponent since 1987, the men’s basketball team nearly shocked the University of Illinois in an October exhibition game, rallying from a 29-point deficit before falling 82-75. Playing in an area with a capacity of 15,500—over five times the capacity of the Field House—the Bears jumped out to a 24-17 lead in the first half, before Illinois answered with a 14-0 run to stake a lead it would hold for the rest of the game.

For the women’s basketball team, head coach Nancy Fahey’s 700th victory wasn’t the only landmark game against University Athletic Association foe Carnegie Mellon University this year. Trailing by 14 points with 8:50 remaining in the game, the Bears rallied with a 17-0 run and held on for a crucial 57-54 victory on Senior Day at the Field House in February. The dramatic comeback victory lifted the Bears to first place in the UAA, a spot the Red and Green would not relinquish for the rest of the season.

8. Ho and Griffith Clean up at ITA Regionals, again

Last fall, then-juniors Rebecca Ho and Kaylan Griffith met in the Intercollegiate Tennis Association’s (ITA) Central Region doubles finals as members of two separate Wash. U. women’s tennis pairs that were able to advance to the final round. Ho ended up eking out a win over Griffith 7-6, (7-5), 6-4.

Ho wasn’t done. Making good on her top seed in singles, she downed the ninth seeded player from the University of Chicago.

7. Football’s win over Hendrix propels them to the playoffs

On Senior Day, senior defensive back Nick Annin blocked a potential game-tying field goal with two minutes left as the Bears held on for a 49-46 victory over Hendrix College. The dramatic victory was instrumental in the Bears winning their first Southern Athletic Association (SAA) title and clinching their third-ever bid to the NCAA playoffs, where the Bears would later fall 49-13 to the University of Wisconsin-Oshkosh in the first round.

6. Baseball wins pair of tournament games and gives Whitewater a run for their money

For the first time in school history, the baseball team won two NCAA playoff games, but the Red and Green fell two wins shy of advancing in the six-team regional. The Bears opened the tournament with an 8-0 shutout victory over Augustana College. The Red and Green then fell to Rose-Hulman Institute of Technology by a score of 6-5, before bouncing back with a 5-1 win over Wartburg College. The Bears’ season came to an end, though, after they fell to the University of Wisconsin-Whitewater, 9-8, in a 14-inning thriller.

During the swimming and diving national championships in Greensboro, N.C., then-seniors Reed Dalton and Amanda Stadermann achieved a rare level of individual success for the men’s and women’s teams.

Stadermann, meanwhile, became the first woman swimmer in school history to win a national title. She won the women’s 200-yard butterfly with a school-record 2:00.53 and beat the field by over half a second.

Both athletes supported the women’s and men’s teams that finished seventh and eighth, respectively, at the national meet.

In her 30th season at Wash. U., women’s basketball coach Nancy Fahey became the fourth coach in NCAA Division III history to win 700 career games, following a 63-50 Bears’ victory on the road against Carnegie Mellon in January. With the victory, Fahey was the second-fastest coach in NCAA to reach the milestone, behind legendary coach Geno Auriemma, by eclipsing 700 wins in just 826 games, good for a .847 winning percentage. After leading the Bears to an NCAA Quarterfinal appearance last season and a 7-0 start this season, Fahey is currently at 718 career victories.

3. Track and field and cross-country dominate year round

By our own admission, this paper doesn’t give the running sports enough coverage, especially considering what a dominant year both teams had.

Here’s a list: Men’s and women’s track and field finished ninth and third, respectively, in the NCAA indoor championship last March. The women’s team went on to finish third in the outdoor championship in the spring. In the fall, the women’s cross-country team was the national runner-up, while the men finished fourth.

The year was highlighted by a pair of individual national titles. Then-junior Daisy Ogede won the indoor 200-meter at the NCAA indoor championships with a school record time of 24.80 seconds, becoming the first Wash. U. woman sprinter to ever win a national indoor title. Ogede also teamed up with then-juniors Rebecca Ridderhoff and Kelli Hancock and then-senior Emily Warner to win the 1600-meter relay. They were the first woman relay team to win an indoor championship for the Bears.

When building this list, one of the toughest decisions to make was what to put at number two. Volleyball or the running sports? Eventually, we gave volleyball the nod because of its complete 180 this season.

After beginning the year 5-5, the team’s worst start since 1999, the Bears used a pair of five-set wins over No. 1 California Lutheran University and No. 5 Juniata College to catapult themselves into a 16-5 run. It was enough to push the Bears comfortably into the playoffs but not enough to guarantee success at the national level.

Those issues disappeared in the postseason. After weathering a close five-set match against Heidelberg University, the then-No. 16 Bears charged through the next four rounds the playoffs, advancing to the tournament’s final weekend for the first time since 2010. They punched their ticket to the finals after steamrolling No. 7 Southwestern University.

Their magic carpet ride finally came to an end in the finals, when the team lost in straight sets against No. 2 Calvin College. But by that point, the Bears were playing with house money.

For the second year in a row, women’s soccer claims the top spot. But don’t interpret this as favoritism: This national championship had enough storylines to fill a season of “Game of Thrones.” By beating Messiah College, the women’s soccer team claimed their first national championship, gave Wash. U. its first title in five years, avenged a finals loss in 2015 and—for the second year in a row—prevailed over the most successful Division III soccer program of the past 10 years.

In the past decade and a half, women’s soccer has been on of Wash. U.’s strongest athletic programs, missing the tournament only one year since 2003. But unlike other upper tier programs (volleyball, men’s tennis, women’s basketball, etc.), the Bears never captured a national title.

There have been plenty of close calls. In 2009, the women’s soccer advanced to the national finals only to lose 1-0 to one of the late 2000s Messiah juggernaut teams. Last year, the team even beat a heavily favored Messiah in the semifinals but lost to Williams College 1-0 in the finals.

But talking about all this history ignores what a hotly contested match the championship game was. In a battle between Messiah’s crisp passing and Wash. U.’s boot-and-fight mentality, the two teams matched up evenly for 71 minutes, before a cross from senior back Lexie Sprague founds its way into the box, where it was chipped into the net by freshman forward Taylor Cohen.

Messiah equalized with less than seven minutes left in regulation, and senior goalkeeper Lizzy Crist made a diving save to her right with 18 seconds left in the second overtime to send the game to penalty kicks. Messiah’s second kicker banged her ball off the crossbar, and all five Bears players converted to give the Bears the dramatic win.

Unlike last year, however, there was no bitter note to sour this victory. The women’s soccer team is Division III’s national champion.