Softball splits against Fontbonne, baseball picks up two road wins over the weekend

With games against regional middling opponents, the Washington University baseball and softball teams hoped to avoid bad losses that could leave a mark on their NCAA tournament resumes this weekend.

The baseball team (15-5 record) succeeded in that endeavor, posting 5-4 and 9-7 road victories against Greenville College (5-10) on Saturday. However, the No. 18 softball team (21-7) settled for a split against Fontbonne University (9-9) by winning 6-4 and falling 6-1 on Sunday afternoon at home. 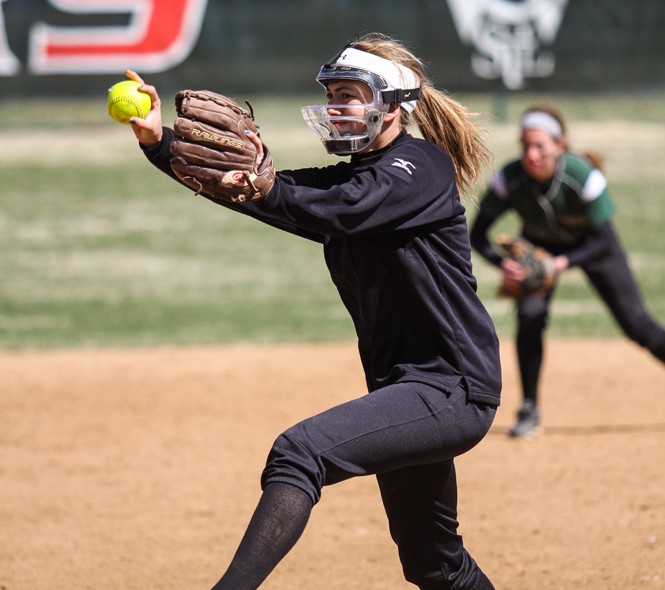 Then-sophomore starting pitcher Annie Pitkin winds up for a pitch on March 23, 2014 against Coe College. On Sunday, Pitkin pitched a complete game, surrendering five hits and four earned runs while striking out seven in a 6-4 win against Fontbonne University.

In an abbreviated seven-inning game against Greenville, the Bears found themselves trailing 2-1 after recording just one hit through four innings. The Bears’ bats came alive in the fifth inning, though, as senior Chris Lowery belted a three-run triple and senior Zack Kessinger followed with an RBI single to stake the Bears to a 5-2 lead.

Greenville added two runs in the seventh and threatened to steal the victory with the bases loaded and two outs, but sophomore relief pitcher Matt Clohisy fired a strikeout to preserve the victory. Starting pitcher Kunal Patel (3-0, 3.45 ERA) nabbed the win, allowing four runs on nine hits in 6 2/3 innings of work.

In the latter game of the doubleheader, the Bears’ offense wasted no time establishing a big lead, scoring the game’s first six runs through three innings. Greenville chipped away at the lead, however, and got to within 8-4 after five innings of play.

Once again, the Panthers mounted a late comeback after scoring two runs in the eighth inning to make it 8-6, but the Bears added an insurance run in the ninth to pull ahead 9-6. Clohisy (1-0, 0.77 ERA) allowed the first earned run of his career as Greenville closed to within 9-7, but he held on to earn his sixth save of the season.

The Red and Green begin a nine-game home stand looking to improve their 2-2 record against ranked opponents when they face No. 25 Webster University on Tuesday afternoon.

In the first game of their Sunday doubleheader, the Bears exploited Fontbonne’s four fielding errors to the tune of five unearned runs.

Although Fontbonne clubbed a leadoff homer in the first inning, the Red and Green responded with three unearned runs in the bottom half, which was capped by freshman Anna McKee’s two-run double. In the third inning, the Griffins strung together four hits and three runs to regain a 4-3 lead. However, Fontbonne couldn’t maintain its lead as the Bears plated three runs in the bottom of the sixth, only one of which was an earned run.

After posting two comeback victories against Missouri Baptist earlier in the week, the Bears rallied in the sixth inning to win for the third game in a row. Junior starting pitcher Annie Pitkin pitched a complete game and gave up four runs on five hits to improve to 14-4 on the season.

Fontbonne led from start to finish in the second game of the day, tallying a run in each of the first three innings against freshman starting pitcher Mackenzie Gauden, while the Bears’ offense was limited to three hits and no runs through four innings. The Griffins extended their lead to 6-0 in the fifth with three runs and secured a 6-1 upset victory.

Following this weekend’s doubleheader split, the Bears will end their 10-game home stand on Thursday with two games against Greenville College.