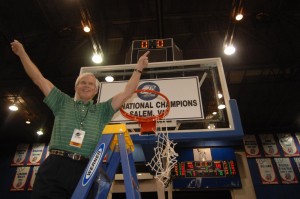 Director of Athletics John Schael celebrates following the Washington University men’s basketball team’s 2008 national championship in Salem, Va. The program was revived in Schael’s fourth year and, after losing seasons in the first three years, has not been below .500 since.

Nearly four decades after taking control of Washington University’s middling athletic department, Director of Athletics John Schael will leave his post with the program now consistently ranked as one of the best in the country.

Schael announced Tuesday that he will be retiring at the conclusion of the 2013-14 school year, ending his 36-year tenure with the University whose athletic program he transformed into a national powerhouse.

In his time at the helm, Schael has overseen 19 national champion teams and 162 conference champions, along with a 70.4 overall winning percentage.

“I’m proud of how this program has grown and developed and certainly glad to be part of the success that we’ve had,” Schael said. “But I think it’s time to move on and spend more time with family and grandchildren and perhaps delve into some new initiatives.”

When Schael first arrived at the University, he was faced with the challenges of expanding and developing the Bears’ athletic program, which was a non-factor nationally. Starting with eight staff members and only seven varsity programs, Schael knew that changes had to be made. To establish continuity, Schael’s first major change started with the hiring of full-time, rather than part-time, coaches.

“Our start of success came from establishing committed and knowledgeable coaches for each program,” Schael said. “We had to make sure that the students were going to receive quality coaching.”

With the support of Chancellor Bill Danforth, the dean of students and other members of the administration, Schael set out to expand the University’s athletic offerings. He introduced a host of new women’s varsity sports to comply with Title IX’s ruling on gender inequity, with cross-country (1979) and basketball (1979) followed by indoor track-and-field (1987) and soccer (1989). More recently, varsity teams have sprung up in softball (2000) and women’s golf (2008).

Also joining the ranks of varsity sports was men’s basketball, which had gone on hiatus in 1971. Ten years later, though, Schael resurrected the program, hiring alumnus Mark Edwards as the coach. In its first three years, the new team scuffled to a 17-54 record, but the 1984-85 season saw the Bears post their first winning record since the program’s revitalization. Since then, the Red and Green have tallied 29 consecutive winning seasons, including back-to-back national championships in 2008 and 2009, and Edwards, 33 years after his hiring, is still the team’s head coach.

“What has always impressed me about [Schael] were the changes that he made and the success that followed. So many of our full-time coaches have stayed for the past 30 years,” Joe Worlund, the University’s associate athletic director, said. “We were a non-factor at first, but we were transforming into contenders.”

In Schael’s first year as athletic director, only two varsity programs posted winning records, but the turnaround was quick and comprehensive. Just five years after Schael’s hiring, the number of winning teams had risen to six, and developments in the mid-1980s such as the construction of the Athletic Complex on campus and creation of the University Athletic Association, a conference in which the Red and Green were a charter member, paved the way for the Bears’ ascension to national power.

“The facilities that we had when I got here were outdated and weren’t going to attract student-athletes,” Schael said. “But after our new facilities, we were instrumental in terms of developing the UAA. From there, the national championships started to come, which was just amazing and earth-shattering.”

The school’s first national title came in 1989 courtesy of women’s volleyball, which soon added to its haul with six consecutive championships from 1991-96. Women’s basketball had a four-peat of its own from 1998-2001, and the first national championships for a men’s program came with the dual triumphs of men’s basketball’s and men’s tennis in 2008.

Perhaps the most telling statistic about the Bears’ success under Schael is that in the last 15 years, a Red and Green varsity program has recorded just one losing season—total.

“I think the success is due certainly to the outstanding coaches we’ve been able to attract and the talented student-athletes,” Schael said. “They are here for the right reasons. They get a quality education and quality experience in athletics. Our coaches are experienced and know how to motivate and move programs forward. I am amazed by the success we’ve had throughout the years in our programs. It speaks well to the individuals and the atmosphere and the leadership that we have in the athletic department.”

According to Worlund, Schael’s success has resulted from his ability to recognize talent and allow coaches to instill their own philosophies within their teams.

“He has a good knack for knowing how to treat people and for identifying great talent,” Worlund said. “Some personalities require a harder fist or close mentoring; others require more space. He has a good grasp of how to handle those types of things. He has allowed people to use their strengths, which has benefited our department.”

Nancy Fahey, the head coach of the women’s basketball team for 28 years, also praised Schael’s relationship and communication with coaches.

“They sometimes talk about, are coaches a players’ coach? He’s kind of a coach’s athletic director,” Fahey said. “He understands us, he’s been supportive and he has been Wash. U. athletics, and that won’t really change.”

“He treats us as professionals, and I think that’s the key,” Fahey added. “Coaches want the opportunity to run their programs. He’s always given great direction, but…I’ll often say he’ll give you the opportunity to be successful, but he doesn’t micromanage coaches.”

Schael’s tenure has been recognized with numerous honors, including his 2007 induction into the University’s Sports Hall of Fame and the 2000 and 2008 National Association of Collegiate Directors of Athletics awards for the Central Region.

Beyond his awards, Schael is a fixture at Wash. U. sporting events and can often be spotted in the bleachers in the Field House or the press box above Francis Field.

“He’s just been a really consistent face. He’s kind of emerged into an icon,” said senior Lucy Montgomery, a guard for the women’s basketball team and the treasurer of the Student Athletic Advisory Committee.

“He knows a lot of [us] by first name,” she said of Schael’s relationship with the student-athletes on campus. “He’s up to date on our accomplishments, and if he sees us in the Athletic Complex, then he compliments our play. He’s very invested in getting to know us and our stories.”

“That’s probably one of the most satisfactory things about being director,” Schael said. “You watch kids come in as freshmen, and they develop and mature. And when they graduate four years later, you know you have something very special.”

While Schael is looking forward to retirement, he said he will miss interacting with the coaches, student-athletes and campus community on a daily basis. Despite retiring, he promises that he will remain involved with Washington University athletics.

“My life after retirement will not end my relationship with Washington University,” Schael said. “Hopefully, they won’t start charging me for coming to athletic events.”