Chasing the Directors’ Cup: What are the odds? 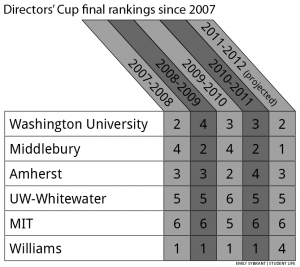 The winter season in Division III college sports has officially been put to rest, and while Washington University has brought back one national championship (women’s cross country) through the first two seasons of the year, it’s easy to think about what else could have been for so many other sports.

However, with so many teams being consistently competitive and making the postseason, Wash. U. has a chance at one title that it’s never secured before: the Learfield Directors’ Cup.

The Directors’ Cup, per the website of the National Association of Collegiate Directors of Athletics (NACDA), is “a program that honors institutions maintaining a broad-based program, achieving success in many sports, both men’s and women’s.” In other words, it awards the best all-around college athletic programs in the country, by division, based on results.

The scoring system to decide the Cup winner is a bit complex, but it boils down to this: the better each team ends the year, the more points it earns for its school. For most sports, winning the national championship nets 100 points and finishing as the national runner-up procures 90 points. The points continue to decrease with correspondingly lower places in the standings. Every school with some postseason presence in a sport will earn additional points. For instance, basketball teams that lost in the first round of the NCAA tournament won their schools 25 points, and teams that finished 75th in track and field last spring earned five points for their efforts. Finally, on the Division III level, only the top nine teams (based on points) on each the men’s and women’s sides are counted in the final total.

Since the Director’s Cup program expanded to Division III in 1995-96, the title has been won by Williams College in every year except for 1997-98 (when Williams won fourth, and the University of California-San Diego scooped first). Any school other than Williams is typically fighting an uphill battle. 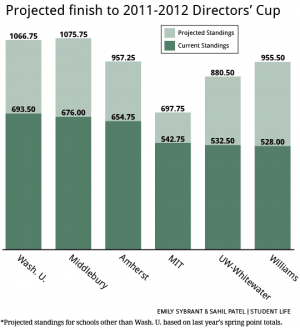 Last Thursday, the NACDA released its standings for the end of the winter season. Sitting in first place, for just the second time ever at this point in the year, was Wash. U. The Bears led the way with 693.50 points, over second-place Middlebury College (676 points), third-place Amherst College (654.75) and, perhaps most importantly, sixth-place Williams (528).

Wash. U. found itself in first place at the end of the fall season as well, propelled by the women’s cross country team’s national championship win (100 points) and by strong marks from men’s cross country, women’s volleyball, and men’s and women’s soccer (who all combined for 272 points). Following up with a winter season in which all seven sports considered placed nationally and combined for 321.5 points, the Bears not only find themselves in first place in the standings but tied for the most points they have ever had through the winter season (they were in first place with the same number of points after winter 2008, on their way to a school-best second place finish). Can they win the title for the first time in school history?

It’s an interesting situation. The point system has changed over the years, so it’s a bit hard to tell, but it appears that sixth place is the lowest that Williams has been at the end of the winter season in any season since the Cup came to Division III. The Ephs, as they are known, put up 230 points in the fall and 298 in the winter, both well below their typical figures for those seasons.

Williams will almost certainly put up a tremendous spring season as it does most years. The school has won national championships in women’s crew and women’s tennis in each of the last six and four seasons, respectively, netting them 100 points for each of those. Like Wash. U., they boast strength across all of their spring sports—they typically receive contributions from women’s golf, men’s tennis, and men’s and women’s track and field.

Middlebury might be Wash. U.’s chief competitor for the award this spring. In addition to a superb fall season, it has top-10 spring programs in men’s and women’s tennis and women’s lacrosse and is competitive in several other spring sports such as women’s track, men’s golf and men’s lacrosse.

Amherst also has a chance to sneak up on the Bears. Its domination of the winter season brought it within 40 points of Wash. U. Amherst has national title contenders in men’s and women’s tennis and currently boasts the top baseball team in the Northeast region.

Let’s set a rough estimate at 1075 points for the Bears to win the Cup. If Middlebury matched its total of 399.17 points scored last spring, it would end the year with 1075.17 points, so this is a reasonable projection. For Williams to match this number, they would need 547 points in the spring. That’s a massive total, but not one that’s completely out of the question based on past history—the only other time Wash. U. led after the winter season, in 2008, Williams put up 503 points in the spring season to coast to another title. For Amherst to reach that mark, it would need 420.25 points, which would require a step up in a few sports.

If the winning mark is 1075 points, the Bears would need more than 381.5 points in the spring to win the title outright. This would be an improvement of 67 points from last season’s spring point total, so it’s far from a given that Wash. U. will be bringing home the hardware. However, improvements in certain sports this spring look very likely.

The women’s track and field team (let’s not forget that women’s cross country and indoor track and field are huge reasons why the Bears rest where they do in these standings) and the women’s golf team (currently ranked No. 2 in the country) both look poised to contend for national championships, which wouldn’t be a bad start. Men’s tennis has consistently shown that it’s one of the top programs in Division III, and based on its recent successes it could be in the fold for a title and should collect several more points either way. Women’s tennis, softball and men’s track and field are all fixtures in the postseason and will all certainly contribute (though one out of those four women’s sports may end up not scoring in the top nine, meaning that they would not be included in the final scoring).

A wild card may be the baseball team. After not making the postseason in the last two years, the team has won 20 of its last 23 games going into Wednesday and looks like a fair bet to make the tournament, which would be adding at least 25 points—maybe more—that the Bears haven’t had in recent years.

Based on our projections (which use a combination of current rankings for teams that are nationally ranked and guesswork for teams that aren’t), the Bears would accumulate about 373 points in the spring season, which would fall just short of the number we listed above. But that can change in the blink of an eye—for instance, none of us will be surprised if men’s tennis makes it past the second round or if women’s track finishes above seventh place at nationals in May. What we do know is that it will likely be a very close finish.

It’s a testament to how far along some of the athletic teams here at Wash. U. have come in the last few years that the Bears are definitely in the conversation to end the year as the best all-around athletic program in Division III. With Wash. U. seeing improvements in certain sports and Williams, the perennial winner of the Cup, suffering a down year, it suddenly looks like the golden opportunity for the Bears to bring home the award for the first time ever.

For any questions about this information, Kurt Rohrbeck can be reached at [email protected] All numbers are available courtesy of www.nacda.com.