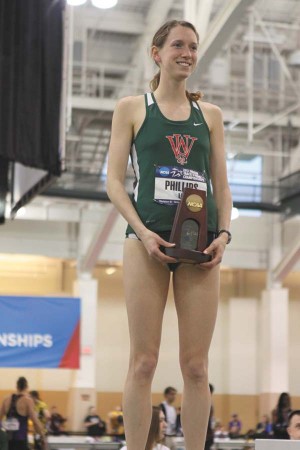 Baseball
In the latest segment of a streaky season, the Washington University baseball team dropped three games after winning 12 straight. The Bears now stand at 13-6 overall.
The Red and Green lost 4-3 to the University of Rochester on an 11th-inning squeeze bunt in the University Athletic Association Championship Tournament Saturday in Sanford, Fla. The team finished second place in the UAA with a 5-3 record.
The Bears opened the conference tournament March 11 with a 1-0 win over Rochester and rattled off four more wins, but they struggled to put runs on the board in their next three games, scoring only five combined in losses to Case Western Reserve University, 4-2, Emory University, 2-0, and Rochester.
Bears’ pitchers posted a tournament-best 1.64 earned run average. Junior Stephen Bonser pitched two complete games and did not surrender any earned runs in either start although he took a loss on two unearned runs to Emory.
The Bears host the University of Wisconsin-Platteville and Wheaton College in back-to-back doubleheaders Friday and Saturday.

Softball
The No. 21 Washington University softball team snapped a three-game losing streak in the UAA Tournament with a 5-4 win over Brandeis University on Saturday. The Bears finished second at the tournament, held in Altamonte Springs, Fla., going 4-4.
A three-for-four effort at the plate from junior right fielder and leadoff hitter Ashley Janssen helped the Bears to an early 7-6 upset of No. 2 Emory on March 14. The Red and Green beat Brandeis 12-3 the next day before slipping up in close losses to the University of Rochester, 9-8, and Case Western Reserve University, 7-5. The team dropped its rematch against Emory, 7-2.
But the Bears bounced back against Brandeis. Senior first baseman Corissa Santos and sophomore designated hitter Kelsey Neal combined for four runs batted in and three hits in six at-bats.
The Bears host Augustana College and Concordia University in back-to-back doubleheaders on Saturday and Sunday.

Adam Putterman (left) and Ross Putterman (right), have been a consistent force at No.1 doubles for the Wash. U. men’s tennis team this season. The Bears return to action on Saturday at home against Wheaton College, after returning from their spring break trip in California with a 2-3 record.

Men’s Tennis
The No. 11 Washington University men’s tennis team hit the coast over spring break, but the results were not all sunny. The Bears lost 7-2 to NAIA No. 4 Asuza Pacific University and won two of four matches at the Stag-Hen Invitational in Claremont, Calif.
The Bears downed the University of Rochester, 9-0, and No. 30 Skidmore College, 7-2, before running into a wall against two highly ranked opponents. The team fell 6-3 to No. 14 Bowdoin College and 5-4 to No. 4 Johns Hopkins University on Friday.
The Bears picked up victories in two of three doubles matches against Johns Hopkins but won only two of six in singles. No. 3 individual Adam Putterman, a senior, defeated No. 6 Andy Hersh 6-4, 6-0 and teamed with freshman Ross Putterman for a 9-8 (7-3) win in doubles, but it was not enough to eek out a victory for the Bears.
The Red and Green hosts Wheaton College on Saturday.

Women’s Tennis
The No. 12 Washington University women’s tennis team also traveled to Southern California and came back with four wins in five matchups with ranked opponents.
The lone blight on the schedule came on March 13 against No. 12 Bowdoin College, when the Bears fell 6-3. Wins came from senior Natalie Tingir at No. 1 singles, freshman Paige Madara at No. 6 singles and sophomores Kate Klein and Corinne Rauck at No. 2 doubles.
Wash. U. bounced back with a 5-4 victory over No. 29 University of Redlands to end their spring-break road trip. The Bears jumped out to a 3-0 lead after a doubles sweep, but Tingir at No. 1 was the only singles victory until Rauck pulled out a 6-3, 6-1 win at No. 6.
The Red and Green have some down time before hosting Division II and cross-town rival University of Missouri-St. Louis on April 3.

Golf
After taking a day one lead at the Phoenix Women’s Golf Invitational Tournament, the No. 2 women’s golf team fell to No. 7 George Fox University on Saturday. It was the team’s first competitive action since early October and the first time it did not finish first in a tournament since Sept. 12.
The Bears led by one stroke after day one but finished eight strokes behind George Fox on day two for a narrow loss. St. Mary’s College (Ind.) could not complete the second day of competition because it had to catch a flight back home.
Wash. U. freshman Olivia Lugar shot a total of two-over par (144) and placed second individually in the tournament. Junior Hannah Buck (149) notched fourth place, and sophomore Andrea Hibbert (152) finished in fifth.
The Bears resume their spring season Saturday and Sunday at the Northern Kentucky Spring Invitational.

Honors for Richter
After competing in the 2012 NABC Reese’s Division III All-Star Game on Saturday in Salem, Va., men’s basketball senior guard Dylan Richter was named to the D3hoops.com and the Schelde North America/DIII News Men’s Basketball All-America teams.
Richter received honorable mention from d3hoops.com and fourth-team recognition from DIII News. He became the 17th All-American player in program history.
Richter averaged 16.4 points-per-game for the Bears and led the University Athletic Association with 75 three-pointers made.
Richter honored teammate and fellow senior Alex Toth in the All-Star game by wearing Toth’s No. 45 jersey. Richter recorded seven points, four rebounds and a block for the West All-Stars in the game.