The best sports moments of fall 2011 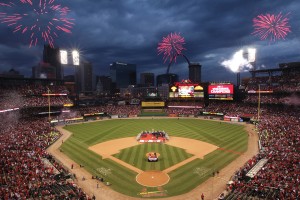 9. Men’s soccer goes viral – From Student Life’s front page to the local NBC station’s morning news, the men’s soccer team hit the big time with its road trip music videos. They “rocketeered” to Atlanta, hit the waves in Iowa and finally “made it.” Don’t be too mean, folks; these videos made the bus trips enjoyable for all involved, and perhaps helped the team play well. The Bears were 3-1-1 on trips in which they made videos.

8. Football blows out Chicago to end its season – After a tough loss to Case Western Reserve University the previous week, junior quarterback Dan Burkett and the Red and Green offense let off some steam in the annual Founders Cup battle with the University of Chicago. Burkett lit up the Maroon defense for 316 yards and four touchdowns, and the defense suffocated the Chicago offense as the Bears rolled to a 38-20 victory.

7. Women’s golf dominates its fall season – Freshman Olivia Lugar jump-started the women’s golf program as soon as she stepped on campus this fall, winning four of her first five varsity tournaments this season. Junior Hannah Buck won the tournament that Lugar lost when Buck set a school-record score of 69 (-3). All in all, the Bears had a strong start to their 2011-12 season by demolishing the competition en route to four tournament victories and the lowest average round score in Division III golf. Lugar currently ranks as the No. 1 golfer in the nation.

6. Women’s soccer reaches the Elite 8 with comeback win – After overcoming injury after injury, most recently to senior forward Emma Brown, the women’s soccer team’s magical run through the NCAA play-offs looked to be coming to an end against the College of St. Benedict. The Blazers had a 1-0 lead late in the second half before Wash. U. kicked things into gear. Sophomore Lauren Steimle recorded her 11th goal of the season when she drilled in a shot after a deflection found her three yards from goal in the 77th minute. Senior Lee Ann Felder found the back of the net eight minutes later off a corner kick from sophomore Kate Doyle, and the Bears continued onwards.

5. Volleyball comes back to beat Emory in the University Athletic Association Championship – The volleyball team had its back against the wall. Emory University handed the Bears their first loss of the season on Oct. 16, and the Eagles had a 2-0 lead after winning the first two sets 25-22 and 25-16. Not to be denied, the Red and Green mounted a furious comeback, winning the remaining sets 25-17, 25-20 and 15-8. Senior Lauren Budde recorded four kills in the decisive fifth set and Wash. U. triumphed after a service error.

4. Men’s basketball upsets No. 1 Augustana College at home – Sporting eight players taller than 6’7” and the nation’s top ranking, Augustana College came in to the Lopata Classic with a lot of swagger. But it was the Wash. U. men’s basketball team, led by senior guard and Lopata Classic MVP Dylan Richter, that got the last laugh. Richter went four of seven from three-point range and overcame early foul trouble to score 27 points and lead the Bears to a 71-68 victory, prompting the holiday-garbed Bomb Squad to rush the court at the final buzzer.

2. Women’s cross country wins national championship, men finish third – The women’s cross country team earned the school’s first-ever national championship as all five point-scorers finished in the top 40. Senior Erica Jackey finished fourth individually with a season-best 21:04.21, and freshman Lucy Cheadle finished 20th with a season-best 21:28.59. On the men’s side, senior Michael Burnstein finished 10th overall with a time of 24:25.25, and senior Tucker Hartley came in 30th in 24:41.99, helping the men to a best-ever mark of third place.

1. Cardinals win the World Series – The Cardinals’ improbable run gripped the campus and prompted raucous celebration on multiple occasions. Professors sported their Cardinals gear, students gathered in crowds to watch the games anywhere that had a television and many found their way downtown to celebrate the Cardinals’ Game 7 victory. It was a time for the campus to come together. It was a great time to be a Wash. U. student.