Who you should root for this weekend 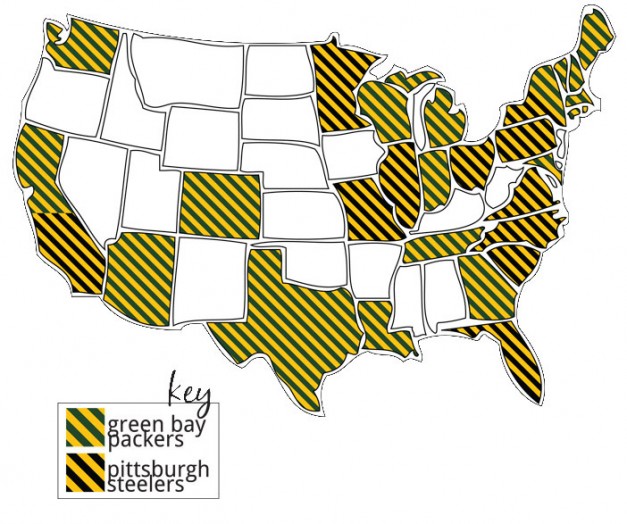 The Pittsburgh Steelers are facing the Green Bay Packers in Super Bowl XLV this weekend. With only two teams left, most football fans will be left without a team to cheer for. If you’re stuck in this situation, or you have no interest in the NFL whatsoever and want to pick a side, here’s a geographic guide to cheering.

Maryland (GB): The Department of Education has replaced the lyrics of the popular playground game “Patty Cake” to “Ra-vens, Crab-cakes, Mar-y-land, we can’t stand the Steelers fans.”

New England (GB): Gisele would not approve of Troy Polamalu’s locks. That said, the whole of New England would not accept Ben Roethlisberger winning as many Super Bowls as Tom Brady.

New York (GB/PIT): If you’re a Jets fan, you’re pulling hard for the Pack. If you’re a Giants fan, you want Pittsburgh to win for vengeance against the team that denied you a spot in the playoffs. If you’re a Bills fan, make sure you’ve got some friends and a good drinking game.

Pennsylvania (PIT): While Pittsburgh residents are obviously rooting for the Steelers, Philly fans are still bitter about the Eagles’ 21-16 loss to Green Bay in the NFC Wild Card matchup.

Virginia (PIT): You’re still bitter about the shellacking Andrew Luck laid on the Virginia Tech Hokies in the Orange Bowl. Believe it or not, though, there are only three players from either Va. Tech or UVA in this Super Bowl, and all three are on the Steelers.

Illinois (PIT): In case all you Chicagoans have never seen a “Real Friends Don’t Let Friends Be Packer Fans” shirt, or needed this article to remind you what city you’re from, you should be rooting for the Steelers on Sunday. Bears fans have been known to yell “Green Bay Sucks!” after games, even when they don’t play the Packers, so why change that now?

Indiana (GB): Colts fans believe Peyton Manning to be the best quarterback in the AFC, and, much like Patriots fans’ sentiments towards Tom Brady, Ben Roethlisberger’s third Super Bowl ring would challenge this.

Michigan (GB): When you are a Lions fan, you haven’t had much to cheer about. Ever. Beating the Super Bowl champions would be the best thing to happen to Detroit since Barry Sanders was drafted in 1989.

Minnesota (PIT): If the Vikings’ division rivalry with the Packers wasn’t enough, they also grabbed Green Bay’s Hall of Fame quarterback, inciting rage on both sides of the Minnesota/Wisconsin state line.

Missouri (PIT): While St. Louis fans might not even realize there is a football game this weekend, Kansas City fans will be cheering on the Steelers. Pittsburgh beat Baltimore, who embarrassed the Chiefs in a 30-7 AFC Divisional Round loss.

Ohio (PIT): Did you know that Big Ben is from Lima, Ohio? Did you know that was a city? The Steelers’ quarterback was in Ohio all the way through his college career at Miami University (Ohio), and would probably appreciate some hometown support on his road to redemption.

Wisconsin (GB): What is Wisconsin if not a state full of Packers fans? Grab your cheesehead and get your Aaron Rogers championship belt ready—if he wins this one, he has as many Super Bowls for the Pack as he-who-must-not-be-named.

Georgia (GB): While the Packers did beat the Falcons handily in the NFC Divisional matchup, Georgians cannot forgive Ben Roethlisberger and his alleged encounter in Milledgeville.

Louisiana (GB): Brett Favre is certainly hard to shake, and his influence upon the South is unquestionable. Hailing from Hattiesburg, Mississippi, Favre’s 16-year tenure with the Packers created a multitude of dedicated Cheeseheads in the region.

The Carolinas (PIT): The Panthers were absolutely terrible this season, but a Week 16 blowout loss to the Steelers clinched the No. 1 pick in the 2011 NFL Draft. Carolina fans can appreciate Pittsburgh’s help in accomplishing that feat. Go Steelers.

Arizona (GB): Santonio Holmes cradling the ball in the corner of the end zone with no time left still gives us nightmares. Down with the Steelers!

Texas (GB): It’s a down year for Texas football when TCU is the best team in the state, so a good game is all we can hope for. However, if Pittsburgh wins, they have two more Super Bowls than “America’s Team.” That is unacceptable.

Northern California (GB): Unless you’re a Stanford fan, it’d be tough for NorCal-ers not to respect the success of a California boy like Rodgers. Plus, they don’t want any other “Bay” teams to be claiming championships…

Southern California (PIT): Mainly just because they have to do the opposite of what NorCal does. Since neither of these teams has any remote chance of being relocated to Los Angeles, they don’t really care that much.

Colorado (GB): Surely, the Broncos faithful couldn’t stand to see Roethlisberger get more Super Bowl wins than Elway, could they?

Washington (GB): The 7-9 Seahawks were so ready to host the NFC Championship game before the Bears came along and ruined it. Seattle fans owe the Pack for exacting revenge. After all, we all know that the Seahawks would’ve won the NFC title game if they were in it…